Debate at the Kaaitheatre in Brussels 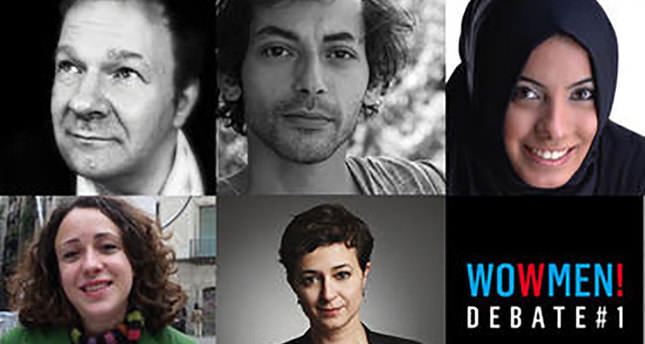 This year, to mark international Women's Day commemorations, I attended a debate in Brussels, Belgium, at the Kaaitheater, a colorful art center with music, theater, dance performances, expeditions, movies and more. Each year, the Kaaitheater announces more than 70 productions by performers and groups from about 20 countries. They include little and wellknown names, and some have been linked to the Kaaitheater for years, while others are here for the first time. There was a debate at the Kaaitheather titled "Let's talk about Turkey!" They explained their reasoning for organizing this type of event - "Now that more and more practicing Muslims are coming to power in Turkey, the feminist movement finds itself on the horns of a dilemma."

And this was the topic of debate among Turkey-based journalist Bernard Bouwman, author Ece Temelkuran, artist Zeynep Pekünlü, dancer İlyas Odman and myself. It was part of the series of events at the international women's day festival.

Our particular debate's title was "A debate on Islam and feminism in Turkey." Islam and feminism is a more recently debated issue in Turkey. As practicing Muslim women become more visible in the public sphere, discussions regarding the public identity of women from an Islamic point of view as well as from the secular perspective are being discussed frequently. The headscarf ban in universities (1997-2011) triggered those who wore the headscarf to work towards greater rights for all women. What initially started off as a struggle against the headscarf ban turned into a broader struggle for human rights and basic human dignities throughout Turkey.

As a women's rights activist, an academic and a journalist, when the Kaaitheather asked me to attend a debate in Brussels I was honored. It's been a part of my life's to work for women and Islamic issues throughout the last five years, and I felt compelled to attend the conference.

However, I was not given much of an opportunity to speak about Islam and feminism issues but was directed to speak about practicing Muslims coming to power, namely, Prime Minister Recep Tayyip Erdoğan.

It was clear the other participants were oriented with pre-election fear mongering.

The debate was about hot-button political issues regarding Turkey, Erdoğan's tone, style, practices and personality and critiques about all. Bouwman started his speech by highlighting that he is not a fan of Erdoğan. There was an immediate condescending tone upon any reference to the prime minister or his family. He mentioned the wiretapping of Erdoğan and his son, which has been categorically rejected.
I would reserve such a speech for many reasons. Firstly, any kind of anti-Erdoğan feeling, idea or concern should not be expressed with this type of argument in a debate at such a respectful institute. The other participants in the debate added accusations against Erdoğan, (not necessarily the AK party but against Erdoğan).

Temelkuran explained her concerns about the future of Turkey by saying Erdoğan speaks on television four times a day and his speeches serve to polarize the society.

She also predicted that Turkey would experience a civil war in 2015.

In answering a question, Temelkuran stated that she was a little hesitant to attend the debate when she saw a picture of me wearing a headscarf on the invitation, because she did not want to be a part of a simplistic confrontation based on an attire. I write and comment on many issues examining life. I do not see myself as a woman who just wears a headscarf.

When I am invited to a place, my response does not depend on the other participant's outlook.

Throughout the discussion it was apparent people had superficial concerns about the problems in Turkey. The discussion turned to focus on Erdoğan as a dictator, the violation of personal freedoms, whether more women were killed in the last 10 years because of domestic violence, et cetera. They painted a dark picture of the years of Erdoğan's rule. I became disappointed about the trajectory of the discussion among the participants and was put in the position of defending Erdoğan.

It was not my intention to be here defending the prime minister - my focus was women's rights.

The disappointment I felt was not because they were criticizing Erdoğan.

I have no problem with critiques. What was disappointing was the quality of the discussion that was circling around anti-Erdoğan rhetoric and nothing more. The starting point of our discussion and its title was not Erdoğan, but Islam and feminism in Turkey - which there was no time allotted to discuss. No one else mentioned the Kurdish issue, the confiscated properties of non-Muslims, why Erdoğan in his third term is still popular in Turkey, how systematic torture ended in Turkey, how issues with health services have been reduced in the last decade, how the AK party's third rule witnessed a very successful female minister (Fatma Şahin, now a mayoral candidate from Gaziantep). The decline in the life quality of some "Westernized Turks," the fabricated concerns of certain groups and possible forthcoming civil wars were allocated the most time during the discussion.