A man's home is woman's castle in Greece 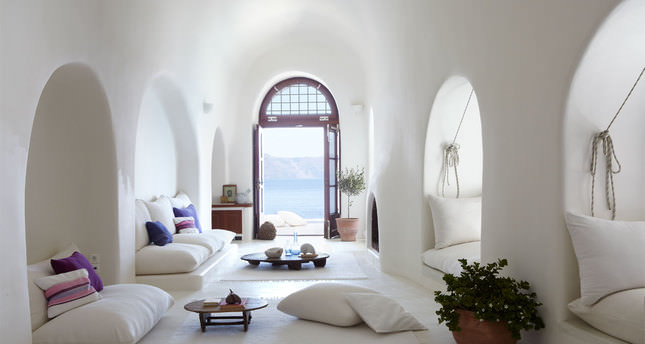 It is Greek tradition that upon marriage, the bride will gift the groom with a house that she vows to turn into a home

ATHENS — There is a long-lasting tradition in Greece: men make houses, women make homes. Consciously or not, this tradition still applies to Greek families.

Most Greek parents build or buy a house for their daughter, not their son, before she gets married.

There are even some fathers who purchase a house as soon as their daughter is born. They always think of their daughter's happiness with her future husband.

In other words, when girls are married, they do not have to rent a house and can live in their own homes.

This tradition was officially recognized as a right until the Pahellenic Socialist Movement (PASOK) took power in 1981. More explicitly, the bride used to buy a house for the groom, which was virtually a legal condition.

From a different perspective, this condition is still observed in some provinces and villages in Turkey.

It is similar to a bride dowry, in which the groom is supposed to give valuables to the bride. The bride's wedding present is called "drahoma," a dowry custom of Greek origin.

Although this conditional wedding present was legally cancelled in 1981, wealthy and middle-class Greek families still help their daughters to purchase a house. In order to attract a groom's family, the house should be fully decorated with at least three rooms - two bedrooms and one living room.

The reason behind the bride's wedding gift is that girls are more "vulnerable" and "sensitive" than boys, with less chance of finding a job. Furthermore, even if a girl does not get married, she can live a life without the need for somebody else to support her or having to rent a house.

Nine out of 10 Greeks own a house thanks to this tradition. Among EU countries, Greece is also the country with the highest number of home owners.

Owning a house has been the biggest wave breaker against the storms of the recent economic meltdown.

Greeks didn't experience much trouble renting even though their wages, bonuses and premiums were reduced with a 26 percent unemployment rate. In addition, tenants benefited from the financial crisis; that is, home owners reduced rents to prevent tenants from having to find other, affordable housing.