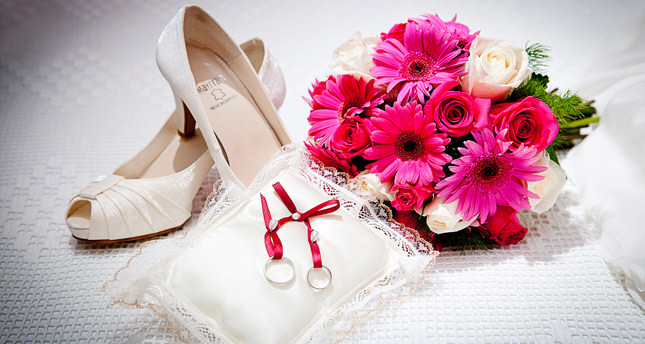 Marriage seems to be more about the preparation for wedding day, than the life that will be spent together

ISTANBUL — Organizing a wedding today has become a bigger event than planning for a future life together as a couple. A couple tries to arrange each and every detail on their own and sometimes ends up losing themselves in the many small details. Unfortunately, as a result of certain physical circumstances or other reasons, they may skip some of the culturally significant Turkish wedding customs. Turkish culture features many colorful, entertaining and sometimes funny wedding customs. The following are some of these customs.

Çeyiz serme, the display of the contents of the bride's glory box (a box of household items) at her new home, is still one of the most important stages of a Turkish wedding for the bride and her family. According to the custom, almost 10 days before the wedding, large groups of women from the bride's and groom's sides come to the couple's house and clean every nook and cranny of the house before the glory box and furniture arrive at the home. The groom's family goes to the bride's parents' house to collect and deliver the glory box. When they reach the house, they find a child sitting on top of the chest. The child is either a brother of the bride or one of her relatives. The child leaves the chest only if the groom's side gives him some cash.

As soon as the glory box reaches the couple's new home, all the women begin to arrange the contents of the bride's chest and the furniture in the house to display what she has made and prepared for her home so far. The contents are generally comprised of handmade textiles such as intricately crocheted doilies and tablecloths, embroidered towels, prayer rugs et cetera. Once the house is set, everyone starts to observe and evaluate the bride's talents. There are always some women who criticize everything, but I think while they state their opinions they are also trying to take a mental picture of the details of the crotchet design. Jokes aside, this is actually an important test for the bride.

The next step is the gelin hamamı (bridal bath). The custom continues to be observed in its original form in small towns or villages, but in the city, the bride's friends organize an entertaining gathering at a Turkish bath in a five-star hotel or a spa center without remaining true to the tradition. Originally, it was very important that all neighbors and relatives were also invited to the bath party. This was also an opportunity for women to see up close potential brides for their sons.

According to the tradition, when everyone gathers in the bath, the bride walks around and kisses the elder's hands and welcomes the guests. Meanwhile, her motherin- law throws some money at her from head to toe. Guests are treated to lots of food and drinks. The bride's friends sing songs and dance on the central massage platform in the Turkish bath. It was believed that if there were two brides in the bath at the same time it would bring bad luck to the marriage.

Another famous custom is the kına gecesi (henna night), which commonly occurs in other Islamic countries as well. Henna night can be called a bachelorette party.

The night before the wedding is set aside for the bride to spend her last night at her family's home in the company of women of all ages who are close to the couple's family.

The ceremony gets its name from the fact that the bride's hands are adorned with henna. The bride, young girls, and the women of her future husband dress up in embroidered dresses called bindalli and the bride covers her face with a red veil. The henna for the party would be brought to the bride's house on a silver tray with two burning candles by a few of the groom's relatives. The bride and her friends, carrying candles, would approach the guests while coins would be scattered over the bride's head as symbols of fertility.

The bride would walk toward her future mother-inlaw and kiss her hand in respect. The hands and feet of the bride are dyed with henna by a woman who was known to have a happy marriage while another woman sings sorrowful songs to make the bride cry. The brides used to cry in the past but today they can't stop smiling behind the veil. The bridegroom's side puts a gold coin in the bride's palm. This gold coin is believed to be a symbol of good luck and abundance. The bride's unmarried friends also dye their hands with henna in the belief that this will enable them to get married soon. In some regions, a similar ceremony is held for the bridegroom by his friends at his home. And finally, the next day is the wedding day. On this day, another tradition takes place called gelin alma (taking the bride). Everybody is invited to this ceremonial procession from the home of the bride to the home of the groom. Guests go by car to take the bride. The procession is followed by drums and pipes. In some parts of Turkey, mostly in the villages, brides are still carried on a horse as an old tradition. In some regions the bride is prepared by elderly women who help and attend to the bride. But today the preparations for the bride are done at a beauty salon. Then she joins the procession on her way to the wedding hall. Before the bride leaves the house, the doorway is sometimes blocked by a male relative of the bride or a younger brother so as not to allow the bride to leave. A tip by the groom's family solves this final hurdle, and the bride leaves her parent's home to promises of a future with her husband-to-be.

In a nutshell, practicing these wedding customs may require time, money and so much effort that you may feel exhausted, but they are the things that turn a wedding into an unforgettable experience.