A cure for polarization 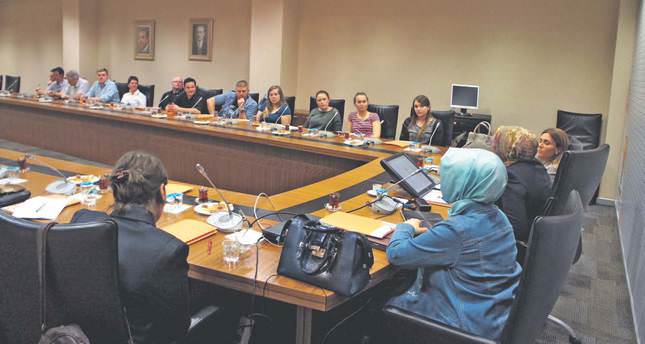 If we communicate directly with foreign journalists, many of the misperceptions and misconceptions will disappear

I recently had the opportunity to meet with 20 journalists from a small island in Denmark. That's right, 20 journalists from one island, all in Istanbul. Apparently there is a running joke there that every family on this island consists of a father, a mother, two children and a journalist.

I have to admit that I was a bit tense. I had met with a different group from Denmark a year ago. But since then a number of events had unfolded in Turkey and the situation is much more complex. There were bound to be questions about Gezi Park, Dec.17, YouTube, Twitter, polarization… I wasn't worried about how to answer such questions; rather, the fact that the answers to these questions have so frequently been distorted or misrepresented in the press caused me to take a deep breath.

After they sat down and the obligatory biscuits and tea had been placed in front of them, the questions started to flow. We talked about the answers, discussed different perspectives, shared jokes and laughed; I was asked questions that were unexpected, causing a pause, an "ahem"; but these too were easy to answer. The meeting was as transparent and forthright as possible. Where errors had been made we stated: "errors were made". Where the truth is different to what has been reflected in the press we presented these journalists with an alternative perspective. All in all it was a positive experience. The journalists seemed content, satisfied with our answers. They stated that they would like to visit Turkey again in the near future. Everyone had a warm, fuzzy, friendly feeling.

This experience showed me that if we communicate directly with foreign journalists many of the misperceptions and misconceptions will disappear. But I also know from past experience that many visiting journalists are met by those who have an ax to grind, by people who want to present the situation in Turkey in a very different light.

But as usual my uber-optimistic approach (at heart I am a pessimist trying to fob myself of as an optimist) crashed to the floor, not with a bang, but a whimper.

Recent events have shown me that there is a serious problem.

We can communicate with foreigners, we can present our side of the story to give a more balanced picture of what is going on; we have to just pursue the opportunity. However, no matter how hard we try, we are unable to do this with our fellow Turks.

An elderly "intellectual" (quotation marks belong to another journalist) claimed that as far as she was concerned, covered women were "backwards" (my quotation marks).

She claimed that the headscarf was a reflection of what was in these women's heads. She went on to utter the next shocking statement: "I see no difference in the mentality of a woman who poses for Playboy in the nude and a woman who wears a headscarf."

Put to one side that this "intellectual" was trying to create a stir to publicize her latest book (very successfully). This "intellectual" has just lumped a religion, a culture, and 65 percent of Turkish women into one mentality that can be compared, albeit negatively, to Playboy centerfolds. Apparently, covered women wear headscarves because they objectify themselves.

As someone who has lived as an uncovered non-Muslim woman and as a covered Muslim woman, I have to differ.

Today, when I talk to men, they look at my face. They listen to what I have to say and they hear my words. This wasn't always the case in the past.

But this story of intentional polarization doesn't stop here. Yesterday a well-known journalist wrote something that strikes at the very heart of Turkey. She stated, much like the journalist I mentioned last week, "You are a majority, the majority. You are 57 percent!" (i.e. the "you" is those people who didn't vote for AK Party) "36 million people say: 'They don't understand us!'"

When you follow what is going on in Turkey from the British and American press, it is AK Party and Erdogan who are creating the polarization. But here a leading so-called "left-wing" journalist is writing about "us" and "them". But wait, it gets even better; or perhaps, I should say, it gets even worse.

This journalist tells her readers to: "Go to Anatolia and gez (meaning take a tour, a short holiday)" …What? Like a tourist? A visitor?
More than 90 percent of Turkey consists of Anatolia; 50 percent of Istanbul and 100 percent of Ankara is Anatolia.

The person who wrote these words and the people who she is addressing are Turkish, citizens of this country. Anatolia is their heart-land. What do you mean go and gez? This journalist calls on her readers to make contact with the people in Anatolia. Let's stop for a minute here, and rewind. Let's leave behind the bigoted approach to the headscarf; the horror of that sentiment speaks for itself.

Let's change Anatolia to the Midwest, to the South, to North of Watford, to Wales, Scotland… Is such an attitude acceptable in this day and age? Tell a New Yorker to go and get in touch with the people in the Midwest, chances are he will reply: "I am from the Midwest".

In Turkey, unfortunately, there is a small elite group that sees itself as being above and distinct from the rest of the country. There was a time in the not-so-distant past when residents of Turkey were divided into "citizens" and "people".

This wasn't so long ago… These "citizens" held the reins of power for a long time. But recently they have lost hold of the reins and the last elections have shown them that they are out of touch with the people; without the people, getting voted back in will be difficult. This mentality still remains, and it is this small sector that is trying to polarize Turkey even further. Now, these "citizens" want to get in touch and "empathize" with the "people". However, dear journalist, empathy is established with the "other", not with your fellow citizens. And there is no need to go to Anatolia; there are plenty of people in Istanbul, in the city where you live, or in Ankara, or in İzmir, about whose lives you have no idea, no concept. You and your "citizens" drive by the "people" in your jeeps and limos, but fail to see them standing at the bus stop.

If you "intellectuals" really want to take a tour of the heartland of Turkey, nothing could be easier. You need only get on the Metrobus, take the ferry, walk down the streets of Ümraniye. No one will shout at you, no one will insult you or spit on you. You will be welcomed, ushered into shops and offered cups of tea. As long as you do not compare the "people" or their beloved spouses to Playboy centerfolds, that is.
Last Update: Apr 12, 2014 2:35 am
RELATED TOPICS