Muslims come first in the history of constitutions 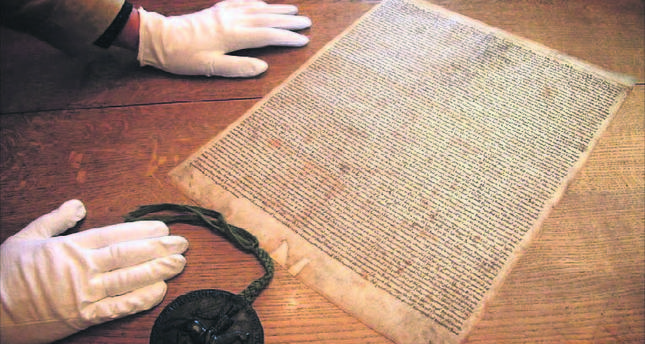 The world's oldest written constitution was announced 14 centuries ago in Medina, Saudi Arabia. The constitution featured a precursor to democracy. Turks are recognized as the leading actor of modern constitution, history since 1808 and the Ottoman Empire adopted the regime of constitutional monarchy with the Constitution of 1876

The Magna Carta Libertatum was issued between the King of England and feudal barons in 1215.

This charter limited the King's powers, imposed fair punishments and the principle of taxation with the consent of noblemen. The Magna Carta is recognized as the world's oldest constitution and is still valid today. However, the agreement between Islamic Prophet Muhammed and the people of Medina is the first democratic written constitution of the world. Although the Greek philosopher Aristotle wrote "the Constitution of Athenians" toward the end of ancient Greek, it was only a historical book describing the ir political system. Books written in ancient India and China for the purpose of recommendations on governance cannot be regarded as constitutions either.

The indispensable elements of modern constitutions are a state regime, governing procedures and fundamental rights and freedoms.

However, there has been no similar constitution in the history of Islam. This is because Islamic law specifies that state regime and governance procedures are shaped in accordance with the requirements of the contemporary world. Further, the fundamental rights and freedoms were ensured with the Quran and the Sunnah, the basis of teachings and practices of Prophet Muhammad.

It was also believed that the rules are granted by God. There was no authority or person eligible to regulate them. If the fundamental rights and freedoms were based on human regulations, it would be possible to restrict or remove them any time. It is due to the fact that anyone entitling a right is eligible to remove it. All other provisions of Islamic law were constitutional principles and the rulers were obliged to act in accordance with them.

The Islamic law did not adopt a written constitution at first and implemented the common traditions of state authorities.

This also applies to the United Kingdom.

The success, therefore, does not lies in the constitution itself, but its power. Following the Hijra of Prophet Muhammad to Medina, a 47-article agreement between Muslims and non-Muslim Arabs and Jews was called as "the Constitution of Medina." Muslims in Medina talked with the Prophet Muhammad when they made a pilgrimage to Mecca and asked him to visit Medina after offering oaths of loyalty.

During the pre-Islamic period, Medina had a population of 10,000 people, including rural areas. Amongst them there were Pagan Arabs and Arabic speaking Jews which had a history of bad blood between them. This chaotic atmosphere came to an end with the arrival of Prophet Muhammad which laid the foundations of one of the most powerful states.

The constitution was prepared following the Hijra of Prophet Muhammad and right before the Battle of Badr. At that time, Medina was not a city-state and tribal life was common. One of the Arab tribes, Banu Khazraj selected their chief Abdullah ibn Ubay as the ruler of Medina.
Ibn Ubay saw the arrival of the Prophet of Muhammad as a threat and became the enemy of Muslims but in order not to draw any public reaction, he acted like a Muslim. Notorious for his repeated conflicts, Ibn Ubay was labelled as "the leader of munafiqun" (hypocrite).

This constitution of Medina regulated the legal status of individuals. The rights and responsibilities of the government were determined which demonstrates that the Islamic law is against arbitrary authority. The merchant Quraysh tribe was denounced as the common enemy and any assistance to this tribe was prohibited. Right after the enacted constitution, the Prophet Muhammad set the borders of Medina whose people dispersed in valleys. Before the advent of Islam, the city was known as Yathrib, but personally substituted by Muhammad with "al-Mad?nah al-Munawwarah" (the radiant city).

The constitution of Medina was remained in force only for a while due to rapidlychanging historical and political conditions.

The constitution was first violated by Jews who secretly conspired against Muslims with Ibn Ubay. After this, the other Jewish tribes betrayed and were deported from Medina.

As a result, there were not any Jewish people in Medina. All pagan Arabs had already become Muslim.

Mehmed the Conquer was the first Ottoman ruler to codify criminal and constitutional law under the name of "Fatih Kanunnamesi" (Fatih's Code of Law). In light of the fact that modern constitutions are legal documents including fundamental rights and freedoms, the Charter of Alliance is recognized as the first modern constitution of the Ottoman Empire. Issued in 1808, the treaty was signed between the Ottoman grand vizier and some local leaders who became almost feudal barons when Mahmud II was enthroned. Mahmud II took power during a rather chaotic period and wanted to ensure his throne was secure. According to some historians, the Charter of Alliance was similar to the Magna Carta.

Following the rebellion of Egypt Governor Muhammad Ali Pasha, England asked the Ottoman Empire to offer some concessions to non-Muslims living in the Ottoman Empire in return for their help. Succeeding to the throne in 1839, Sultan Abdülmecid I assigned pro-English statesman Mustafa Resid Pasha as the Grand Vizier. Resid Pasha drafted a proclamation with the order of Sultan Abdülmecid I. The rights and freedoms of non-Muslim groups were ensured under a written declaration named "Tanzimat Fermanı" (Edict of Gülhane). The most important part of this edict was to revoke the right of emperor which used to enable him to punish his viziers. The era of bureaucratic sovereignty commenced with the arrival of the Edict of Gülhane. From this perspective, it could be considered as a constitution.

The conflict between Russia and the Ottoman Empire escalated due to the Balkan uprising that broke out in 1876. To be on good terms with the European countries, a constitution was deemed necessary. Some Ottoman statesmen such as Midhat Pasha and his colleagues deposed Sultan Abdulaziz I through a military coup and Murad V became the Sultan. When Sultan Murad V was not in favor of constitutionalism, Sultan Abdulhamid II succeeded to the throne. A commission was established to draft the first constitution of the Ottoman Empire. The member of the commission included wellknown poet Namık Kemal, 16 bureaucrats, three of which were Christians, 10 ulemas (Islamic scholar) and two military generals.

Some member of the commission suggested that "The best state regime is Islam, which derives its origins from divine God. However, constitutions are based on human nature and open to change. It is not rational to adapt the institutions of groups with different religions."
There were also some other people claiming, "We have a smart ruler now. This is because, there is no need to declare the Ottoman Constitution of 1876." However, Midhat Pasha insisted on the implementation of a written constitution. Meanwhile, the Ottoman parliament convened. The draft of the commission was negotiated among the Viziers and the constitution of 1876 was put into force with 119 articles. T
he constitution was adopted when the European delegates were at a conference to discuss the Balkan crisis in Istanbul. However, the delegated underestimated the declaration by describing it as "child's play."

The Ottoman Constitution of 1876 was inspired by the 1831 Belgium and 1850 Prussia constitutions and adopted the unity of power specified in the constitution of Prussia. The authority of the emperor was ensured, yet he was put outside of the system. In other words, the Emperor was not only referred to as "the Sultan of Ottoman Emperor" or "the Caliph of Muslims", but also acquired the image of "the Ruler of Europe." However, there was not any significant change and the constitution was in effect only two years. The declaration, suspension and removal of this declaration did not draw a sharp reaction from the public.

It is important to note that as more people became interested in politics, the second constitutional era in 1908 kicked off.

Subsequent to the Russo-Turkish War in 1877, Sultan Abdulhamid II disbanded the assembly and suspended the elections. He governed the state for the next 30 years with absolute power. Meanwhile, the constitution remained and the state institutions apart from the assembly were accordingly regulated.

The constitution was referred to in state almanacs. The main objective of the first Ottoman constitution was to make bureaucratic governance official. However, Sultan Abdulhamid II gave up this vision and tried to return political power to the palace, much like under his grandfather Sultan Mahmud II.

Against the absolute power of the ruler, the Committee of Union and Progress, which was a secret-circle of liberal military officers, staged a revolt in Macedonia in 1908. The next year Sultan Abdulhamid II was deposed and some significant changes were adopted in the constitutions. The authority of the emperor was restricted and acquired a symbolic status as the Western kings. The period of "crown democracy" tried to turn into a dictatorship by the Committee of Union and Progress attempted to bring a dictatorship.

Everything was on track in 1918, however was lasted for a short period of time.