Of time and the clock tower 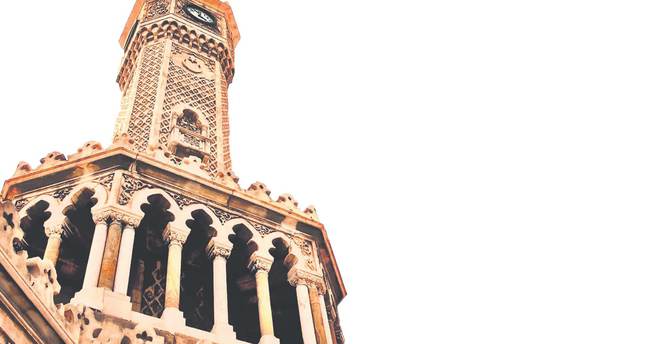 Throughout history, the concept of time has always been of great importance for humankind

ISTANBUL — They used to measure time in different ways. The sun was the most important indicator of time. As time passed, people used different measuring devices, from sundials to sand and water clocks and finally they made mechanical instruments such as clocks to show the time.

The earliest measuring instruments were developed by Eastern people. Ancient Egyptians were one of the first cultures to widely divide days into equal parts and use early timekeeping devices such as sundials, shadow clocks or water clocks. Religion was a driving force behind needing to know the time in Islamic Communities. Muslims were obliged to pray five times a day and since the time of the Prophet in the seventh century, Islamic religious leaders had been concerned with devising ways of determining these prayer times by observing the varying phases of the sun. This method was used until the Muslim armies moved out of the Arabian Peninsula into Palestine and Syria, where they first came into contact with sundials and water- clocks. Most mosques used this system to determine the prayer times until the 16th century when mechanical clocks came into use. Arabic scientists such as mathematician al-Khwarizmi and astronomer al-Qashrami authored other studies about clocks. In Abbasid Baghdad, the bibliographer Ibn al-Nadim was one of the first authors to write on the subject of time, offering details of mechanical clocks, sundials and water clocks. "Our monarchs and scholars use astrolabes during the day and water clocks during the night to ascertain the hour and have certain other instruments for measuring the shadows of the sun," wrote al-Jahiz, an encyclopedist, in the ninth century. During the reign of the famous Abbasid Caliph, Harun al-Rashid, historians wrote of "a clock that strikes at the hours,'' which he sent with a delegation to the Emperor Charlemagne along with several water clocks.

These clocks may have been a primitive form of geared clocks. But they were the first ones seen by Europeans then.

Topkapı's Turkish time pieces. Despite the fact that the first timekeeping devices and the variants of clocks were seen in the east side of the world, clock towers were built first in the West by Europeans. This can be explained by the functions of the "Muvakkithane."

Muvakkithane was a place where the calculations of prayer times and the day were done using the mathematical and astrological methods and mechanics worked on clocks. Scientists who were responsible for this work were known as Muvakkit. They used to prepare the imsakiye (Ramadan timetable) as well. People used to organize their daily routines following the adhan (call to prayer) times which were calculated in Muvakkithane. The appearance of the first clock towers in the Ottoman history was after the Sultan Süleyman the Magnificient in the end of 16th century. The Ferhat Paşa Mosque Clock Tower and Üsküp (Skopje) Clock Tower were the first ones constructed in the Balkans. Clock towers were first built in towns and cities of Anatolia in the 18th and 19th centuries. Once the clock technology was developed they became commonplace during the reign of Abdulhamid II. The Sultan was interested in science as well as religion. He was following the developments in Europe and trying to institute them in Ottoman Empire during his 33 years of reign. In Honor of Sultan Abdulhamid II on his 25th anniversary of enthronement more than 100 clock towers were built all around the Ottoman Empire. The towers were a symbol of power which the sultan used to show the power of the Empire while also offering services to the people.
Clock towers were constructed at the center of every important city, either nearby the government intuitions or above historical buildings.
Actually this was counted as a kind of a secularization movement in the sense of setting down the working hours of the state intuitions. The prayer times and Ramadan timetables were still determined by the Muvakkits.

By erecting clock towers the Sultan was able to make his personal mark on the town and convey a message of precision and advancement. It was also a sign that the Ottoman Empire was entering the modern European age in addition to the message: "the state is here."

According to Dr. Hakkı Acun in his study "Clock Towers of Anatolia," there were 144 monumental towers including 52 that have stood the test of time and survived to the present day, 20 that have been destroyed for various reasons, another 72 that fell outside Turkey's borders after the founding of the Republic and eight were added later in the Republican period. The most beautiful clock towers in Istanbul are the ones nearby the Dolmabahçe and Yıldız palaces which were built in baroque style. But the most artistic of all is the İzmir Clock Tower located at Konak square in İzmir. It was designed by Levantine French architect Rymond Charles Pere and completed in 1901 on the 25th anniversary of Sultan Abdulhamid's accession to the throne. The clock itself was a gift from German Emperor Wilhelm II. It was decorated in an elaborated Ottoman architecture style. The tower, which has an iron and lead skeleton, is 25 meters high and features four fountains, which are placed around the base in a circular pattern.

Today six of the clock towers still exist in Israel and Palestine. Unfortunately the Jerusalem clock tower was demolished by the British who captured the city in 1917. It was claimed that the tower did not fit with the style of the Old City Wall, therefore it was demolished. Who knows, maybe it was nicer than the Big Ben clock tower in London. A splendid four-story tower made of limestone was built above the Jaffa Gate in the Old City. Four clocks were placed on the third story and on the fourth story, which was particularly ornamented, was the bell. At the top of the tower was a decorated metal pole with the Ottoman Crescent and star. The Israeli Postal Service depicted the images of the clock towers on the stamps in 2004. The clock tower built in Nablus is the landmark of the city in Palestine. It was renovated by the Turkish Cooperation and the Coordination Agency in 2012. It is surprising that there is another clock tower in Mexico City which is known as the "Ottoman Clock" among the people.

It was built as a gift from the Sultan Mehmed V to Mexico in 1910. It is beautifully decorated with traditional İznik tiles. When Turkish Prime Minister Recep Tayyip Erdoğan visited Mexico in 2009, with his instruction the clock tower was restored and unveiled on the 200th anniversary of Mexican independence.

No doubt; measuring time, from the early sundials to the latest digital watches around our wrists, has meant so much to humankind. However, while they were only showing the time, the clock towers have showed more than time. They became the voice of an empire and today we can still hear the sound of it when we see a clock tower.