When a depot becomes a village… 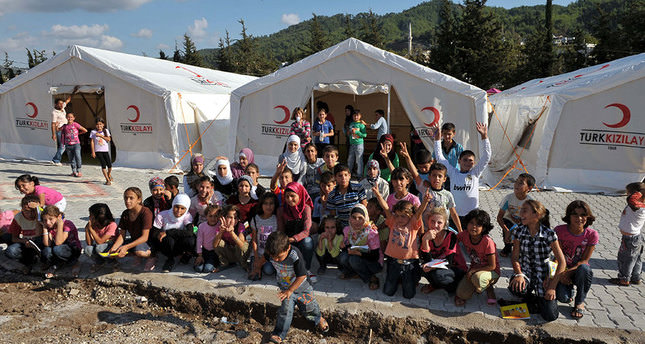 Syrian refugees taking shelter in temporary, unofficial camps in Istanbul do what they can to recreate the sense of community they were forced to give up back in Syria

As we walked into the compound, the man in his grey ankle-length gown scurried past us, muttering to himself. The drive to this temporary Istanbul Syrian camp had been a bit surreal…as we drove past the former Grand Prix Racecourse, I contemplated that so close to a place where cars worth more than $2 million had once pounded around a race course to entertain the Istanbul leisure class, people were living in tents with little or no possessions, having fled the bombs of the Assad regime.

At first, in fact, we drove right by the camp. It was only the zabıta (local constabulary) car waiting for us with flashing lights that gave us an indication that this was our destination. As we entered, the first people I saw - a couple of women - could have been Turkish women…. heads covered in a simple scarf, baggy shirt, long skirt. But then out came the man in the grey thawb, muttering to himself.

We were met by officials from the Turkish Red Crescent. Standing outside we asked the most basic of questions. How many people are there in the camp? There are 511 people in the camp, give or take. Why give or take? As they are not officially registered here, the records are flexible, the residents are free to come and go, and come and go they do. There is a total of 102 tents, 98 for families, the rest for bachelors. In general, the four-people tents house large families, as many as 10, parents, children, sometimes even grandparents (the eldest resident is 95 years old). There are 289 children in this camp.

Then we walked up the cement steps to the cement balcony, which had intermittent railings. After all, this building had been purposebuilt as a storehouse; the "balcony" was actually a loading dock. A toddler on a tricycle came screeching past us, heading for the precipice…just as I was about to do a superhero jump to grab her, she turned and veered off in another direction. The Red Crescent official caught my eye and smiling, said "Yes, very little supervision, but to date, no accidents…"

We chatted for a while on the balcony, and then progressed into the actual depot space; here tents were neatly arranged in rows of three, and the area seemed clean and airy. Women milled around, men sat in chairs talking or walking out onto the loading dock to smoke a cigarette. Children ran around, stopping to look up at us with curiosity, and then running off again. We started to walk through the camp, asking more questions. Where are the majority of the residents from? Almost all are from Aleppo. Do any of them want to go to the official camps to the south? No, they want to remain in Istanbul.

Indeed, the Syrian residents are encouraging their friends and families to come; in this temporary camp, there are very few rules. They leave the camp and go work (illegally) or beg. Some beggars earn as much as 250 lira a day. They have cellphones and Internet; the Syrian residents even have their own Facebook page on which they communicate, telling their friends and families to come and join them.

By this time we had reached the end of the depot; looking out the back door, and not seeing much, we turned back. As we made our way a smiling woman caught my eye, and beckoned to the door of her tent. She made the internationally understandable gesture for "a cup of tea?" We looked to our Red Crescent friends, and they nodded. First the women went in, with the men holding back. But the hostess insisted and the men came in too. Five Syrian women squatted on one side of the tent, we sat on the floor, and a middle aged man entered. He fiddled with his cellphone, went to Google Translate and then showed us the phone:

As I was accompanying a foreign diplomat, we answered no, we just wanted to learn about the camp and the people there, what they were doing, their conditions. Not a word we said was understood. Not in Turkish, English or French. Someone ran to get one of the residents who spoke Turkish.

Much to my surprise our translator, Davud, was only 14 years old. He came in and sat down, calm and collected, face devoid of emotion. The middle-aged man bombarded him with questions about us, he translated and we answered. Then it was our turn. How long had they been here (most for only a few months); why weren't they in the camps to the south (they didn't like them, they were not good like this camp). A toddler came in front of us. Where had he been born? On the border, in the Syrian camps. Then the women started to tell us how many children they had. One had nine, the youngest only three or four. The cheerful woman who had beckoned us in had six children.

What do these children do all day, we wondered? Is there any form of schooling? No, the children just "hang out." Didn't Davud miss school? The flat effect on his face was reflected in his answer: not much. It's ok here. What did the women do? Sit around and drink tea. What about the fathers? Sit around and drink tea…some go to work. Our interlocutor told us how they would love to have a school. It wouldn't be hard; just set up two tents and hey presto! a school. When we asked the Red Crescent representatives about schooling, they sighed. Yes it would be fantastic to have a school here, but this is an unofficial, ad hoc camp set up to shelter the Syrian people from the cold weather. These people had come to Istanbul unofficially; they have no legal status and should be in the official camps. But rather than leaving them on the streets to suffer the Istanbul winter, last November the governor and the Red Crescent set up two emergency camps. The original plan was that when the warm weather came the camp would be taken down, and the depot would be handed back to the Red Crescent.

What about health issues? A nurse and doctor came once a week, but as the residents are not officially here, and are not registered anywhere, a number of hoops have to be jumped through to get the prescriptions filled. The patients have to wait for a week. And the care provided is only emergency care. A little boy came in and his mother plopped him across from me; the dark circles around his eyes told me that his health was not as it should be. After some toing and froing we learned that he suffered from epilepsy. The constant treatment he needs is only available in the south eastern camps. But the parents refuse to go - they prefer the economic opportunities of Istanbul.

In the southeast of Turkey there are 15 tent-cities, one temporary registration camp and six camps with prefab shelters. The camps offer shelter, food, health services, security (there were police on duty in the camps), social activities, education, communication and translation services. There are play areas for the children, tailoring courses, television rooms, supermarkets and generators. When I told Davud to relay this information to our hosts, he looked at me and said "This is fine. I do the translations here. We don't need those things."

Having reached an impasse, I remembered the lollipops I had in my bag. I only had 25 and there were many more children than that. In the safety of the tent, I stretched one out to Davud and to the friends sitting with him. I looked up and saw that a number of small faces had suddenly appeared at the tent door. I instructed Davud to hand more out. More faces appeared… in the end I gave the entire bag to Davud and said, go and hand them out. He went out and I heard excited shouts and scuffling…he came back, slightly disheveled, a few minutes later.

Suddenly realizing that he had an opportunity to make some requests, the middle-aged man started to instruct Davud to translate some of his complaints. The food is not enough, he said, the water is not distributed every day. As we had passed stacks and stacks of water bottles, to which the residents can help themselves, I didn't take these complaints seriously.

As I left, the children gathered around. Lacking language I just asked names "Aisha, Khadija, Meriem….Mahmut, Ali. They looked up at us, some smiling, some with the same deadpan expression as Davud. Davud's little sister was there. I took their photograph. She didn't smile. I took another one. Still grim... As I put my camera away, Davud whispered something to her and she broke out into a huge grin…Her face was transformed.

It was lunch time, and everyone was lining up to get their meals. On each tray there were four to five large meat patties, piles of rice, potatoes and soup. I couldn't have possibly finished such a generous meal. The residents were in charge of doling it out. In fact, the residents are responsible for maintaining cleanliness and order throughout the camp; the system seemed to work pretty well.

The man in the thawb came shuffling by again, muttering to himself, scratching his chest. "That's Ali" Davud said "He's crazy." Every village has a crazy man, and I guess Ali is an indication that this camp was truly a village.

On the surface, the children seemed happy; the women were smiling, laughing and teasing one another. The men were getting along. There had been a brief altercation as we entered the camp, but it was soon smoothed over; all in all, there was a sense of peace, of security. This camp, the residents said, was preferable to Aleppo or Homs, where houses were being flattened by bombs. I guess almost anything is acceptable if it is safe…. the human condition requires security. A lack of safety is the real hardship. Thank God that we have this security and we can offer it to others; as I look to the north and to the south of Turkey, I am even more grateful for what we have.