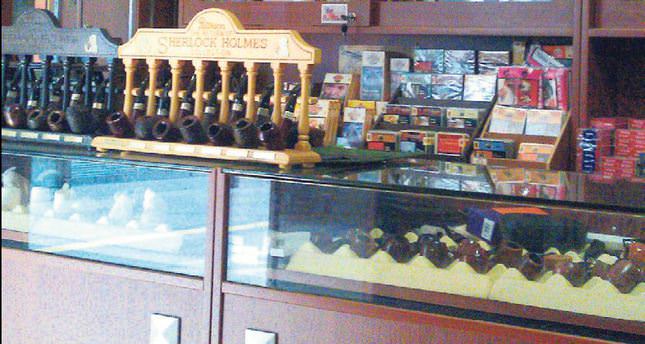 Smoking a pipe is considered to be the act of classy and sophisticated individuals, however there are health warnings that one should be aware of. Although the number of pipe smokers is few the tradition that dates back centuries is still enjoyed in small circles

ISTANBUL — Pipe smoking may be today's least common form of tobacco intake, but it wasn't always this way. The oldest form of smoking known to mankind, pipe smoking still survives in Istanbul with devout followers of the tradition puffing away on their pipes. While it was on its way to becoming obsolete, in the last decade a couple of cultural elements managed to make pipe smoking attractive again. "The Lord of the Rings" books and movies come right to mind when one mentions pipe smoking, although the pipe references in the series might be intentional considering the pipe smoking habit of J.R.R Tolkien. Tolkien wasn't the only famous figure who occasionally enjoyed a puff or two.

Albert Einstein and Mark Twain along with many others were also known for their pipe smoking habits.

Although many people think the wooden, or to be more precise briar, pipes are the only ones out there, there is quite a selection to choose from. Corncob pipes are one such example.

Since they are relatively cheap and easy to produce, many lower-class people back in the day chose to smoke corncob. But important figures like General Douglas MacArthur, Mark Twain and Norman Rockwell enjoyed them nonetheless. Even today, corncobs are used for tasting new tobacco flavors without carryovers from previous smoking sessions. There are also meerschaum pipes, which are mostly hand carved in Eskisehir, Turkey. Ever since the 17th century, meerschaum pipes have been a sought-after product for their great looks and easiness to smoke. They are also a great tourist attraction and provide trade income for Turkey. The calabash pipe is another type that has a meerschaum interior, and they are quite famous thanks to Sherlock Holmes who is always portrayed puffing his calabash. Metal and clay pipes are not really preferred but are still in use. There is also the kiseru, a traditional Japanese pipe made from metal and bamboo. Of course, most famous pipes are, as we said, the briar type. Thanks to its resilience against fire and ability to absorb moisture, briarwood is used in different types of pipes ranging from churchwardens to bent ones.

As pipe smoking is an activity that involves preparation, many see it as a futile effort. Referring to my pipe smoking habit, a friend once said to me, "Isn't this a lot of work just for a delight?" My answer was, "What else other than a delight would justify this much of work?" Pipe smokers usually have the same mentality. It is common for them to seek each other out both for strategic purposes like sharing different blends of tobacco but also to share this delight with each other above the magnificent views of Istanbul. They even have an association called the Istanbul Pipe Club (Istanbul Pipo Dernegi), founded by Turgay Ocak. Besides the occasional gathering, they organize a slow smoking race every now and then. Living up to his founder title, Mr.

Ocak is the current champion with a time of 1 hour and 25 minutes. The members of the club are also planning to join the next world championship and honing their skills. After all, a good pipe smoker is one who continues smoking their pipe as long as possible without extinguishing it. The association is next to a pipe shop called Pipo Market based in Perpa, a trading center near Beyoglu.
Pipe smoking may be a tiring activity, though, because it doesn't really allow a person to carry a conversation easily.

A pipe is a jealous thing and always wants your full attention lest it goes out. But you can use this to your advantage; after all, a pipe in your mouth gives you time to think of a witty response. All those famous people couldn't have been wrong. As Einstein once said, "I believe that pipe smoking contributes to a somewhat calm and objective judgment in all human affairs."

"All that being said tobacco is extremely harmful to your health no matter how you inhale it. As in Europe, the Turkish government is taking measures to prevent tobacco use in order to ensure public health and this article is aimed at giving readers knowledge about traditional pipe smoking, as opposed to encouraging the practice."