Hyderabad: A journey through 'Deccani Souls' 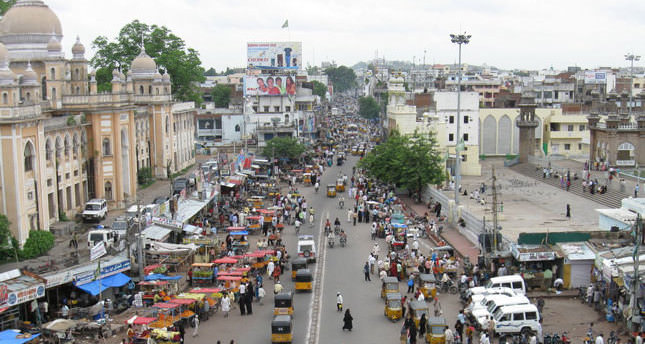 by Sana Qutubuddin May 12, 2014 12:00 am
Hyderabad, India is known as an information technology hub with fine academic institutions. To history aficionados, it is known as the former capital of the last Islamic state in the world, with a rich intellectual and cultural legacy. It was a nation the size of Europe, stretching from Warangal in the east to the outskirts of Mumbai in the west, in the heart of what is now south-central India.

Between these starkly different Hyderabads is Kaz Rahman's film "Deccani Souls" that strings together the present with the past. Taking the audience through an artistic foray of the erstwhile state, the film was screened by the Bilim and Sanat Foundation in Istanbul last weekend. Canadian filmmaker, producer, and writer Kaz Rahman pioneers rare waters as he embraces what he calls "the black cloud" of history hardly discussed in contemporary Hyderabad.

When I had the chance to sit down with the filmmaker it was apparent that his most recent film had been a part of him for some time. Mr. Rahman grew up listening to stories about the Nizam era from his father who migrated from Hyderabad as a teenager.

During his time living in Hyderabad between 2004 and 2007, Mr. Rahman observed the frenetic ebb and flow of the region and saw how the neglected pages of history were impacting the present. It was then that he said he knew he had to make the film. "Whether I liked it or not, this had to be the subject. In the film, Hyderabad is both a place people leave and a destination much like the reality of the city today. There's a lingering sense that people need to leave in order to make something of themselves but there's also this longing for return. Muslims have been migrating out of the region since the 1950s, to Pakistan, the Gulf and North America.

There's this psychological state that they can't get ahead in Hyderabad," Mr. Rahman said.

The film explores the region's suppressed history that is the aftermath of Operation Polo, which left 200,000 dead, numerous institutions destroyed and Islamic libraries burnt in 1948 as India brutally acquired the state. Mr. Rahman used the Sunderlal report for information about the massacre and destruction.

It's this chapter of history that casts the film's melancholic tone. He said its purpose isn't to tell the audience how to feel about it, it's an attempt for them to come to terms with history. "I don't think any community, state, society or people can look to go forward without coming to terms with its past," he stated.

There is a play on the concept of time, Mr. Rahman said. "There's an intersection of dreams, memories and how we recall the past."

It poetically takes the audience on a journey back in time through the lives of two Hyderabadis: A censuscollector named Babu, who goes around door-to-door asking people to sign away the neglected memories and scars from the military action, and Hamza, the film's protagonist, an Urdu poet suffering from writer's block in search of his grandfather's lost essay.

Mr. Rahman visually preserves the tradition of Deccani art throughout the film. "He said if you look at the art the Nizams commissioned, you will find that people are always in natural settings. People aren't depicted being in institutional settings, they're painted with individuality and in nature. In contrast to Moghul art, where people are often seen in military uniforms and closely associated with state endeavors,"

Mr. Rahman explained. "Their art collections indicate the appreciation they had for nature but also the quality of life they planned for the state's residents. Now, Hyderabad is a bustling city that people move to for its advanced urban planning, parks, and walkways, something that's unique in India. But the cities throughout the region, under the Nizam's rule, were planned for more people than they accommodated at the time. Hyderabad city was planned for five million people at a time its population was only several hundred thousand. "It was a time they commissioned a variety of different endeavors in the sciences, arts, and literature. They welcomed talent from all over the world and it was the center of intellectual activity among Muslims, but today the constant brain drain of this population from the region has left few even able to read from the Persian library collections at Salar Jung Museum," he noted.

But Mr. Rahman is quick to point out that the refined nature of the Nizam's state that only had an army as a ceremonial emblem rather than one that could defend its population left it vulnerable in the face of the invasion.

The beautiful lyrical showcase of the region's poetry, spiritual culture and cinematographic visuals of the architectural decay and Deccani art make "Deccani Souls" an immense achievement in the path to engaging with the past. Mr. Rahman's film leaves the audience asking more questions and looking inward with greater reverence for all the layers we know and are yet to discover that make up our identities.
Last Update: May 12, 2014 3:07 pm
RELATED TOPICS