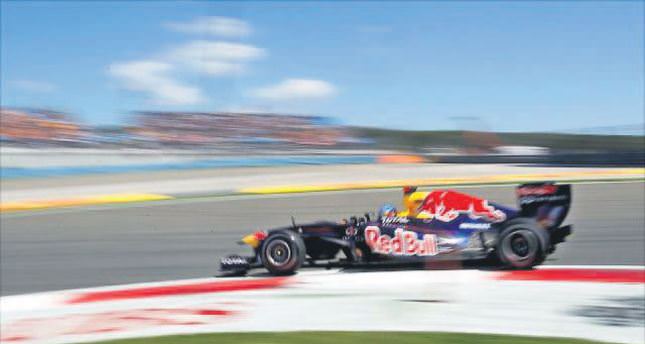 No matter who you are, once you feel the vibrations of the turbocharged V-6 engines of F1 race cars in your bones, you enter a dreamy world where reality is something beyond what you expect from a normal car race

Whenever you go through the entrance at a Formula One (F1) race, you get the impression that you have entered into a different world. Like it or not, you have no choice but fall under the spell of the worldly-renown auto racing . As soon as the turbocharged V-6 engines (about 750 horsepower) start up, you feel engine vibration through floor and adrenaline pumping through your veins.

At the very moment, you realize the F1 offers more than a race circuit with 22 cars. There is a common phrase among Turkish racelovers from all ages: "racing like Schumacher." Presumably the world's unique anti-clockwise F1 circuit, the Turkish Grand Prix, was constructed to hold the 2005-2011 F1 seasons at the Istanbul Park in Tuzla. People were waiting with bated breath to see Michael Schumacher, the greatest F1 driver of all time. Turkey's first fast race-course introduced the most favored F1 cars and drivers along with special tours on the Bosporus among other certain historical sites. The F1 races even featured some humorous occurrences, among them, when Red Bull driver Mark Webber was fined for not paying the transition fee to traverse the Bosporus Bridge.

Despite a spectacular start, Turkey's Formula 1 ended after seven years. The Turkish Grand Prix was left to its fate for a long time. Recently, race junkie and businessman Vural Ak has been working to bring the F1 race back to Turkey. One of the underlying reasons of why the F1 adventure came to an end was the sumptuous nature of the organization. Everyone was complaining about the large amount of money spent for F1. More than that, nobody took responsibility for the financial failure caused by the sensational events.

However, the ticket revenues received in the first year and first three days surpassed the total revenue of the 2005 Turkey Super League. More explicitly, an average of $15 million (TL 31 million) was earned after the first round of the race.

The amount equaled 15 local derbies between Galatasaray and Fenerbahçe. The significant contributions of thousands foreign tourists flocking into the hotels were undeniable. They spent millions of dollars on city tours, transportation, food and shopping. As mentioned, both the organizational costs and the ticket revenues were very high. The Formula One, hence, seems it is a kind of international business model and requires too much skill to successfully operate and make a profit. Let's now take a look at the social reasons, probably the real reasons of why the F1 is not held in Turkey anymore. Without shadow of a doubt, the F1 is the world's highest-class motor race.

It also has a special place, being one of the most expensive and most-watched sport events after football and the NBA. Leaving aside legendary F1 characters such as Schumacher, Ferrari and McLaren, F1 is the Hollywood of sports and acted as a showcase of the automobile sector, one of the financial energizers. Indeed, the F1 adventure represents a dreamy world. It is a visual perception fest in which drivers are handsome, women models are beautiful and race cars are powerful. In other words, F1 triggers an emotional and sexual response under your conscious that you may desire to "look like them." This is because the organization should be professional enough to manage audience perception. As seen in football matches, however, the event is advertised through the employees hired with low wages.

Many adult men are craving for the F1 cars like a naughty child saying "I will buy a Ferrari when I grow up." While one part of the world is willing to resemble a famous F1 driver, the other part wants to have sex with him. Although these men and women probably spend an entire wage to go to an F1 race, they may piss off and say "Go to the hell" to the organization committee, if their dream is not turned into reality.

While attending F1 races exceed the budget of Turkish people, officials are instead stuck on its unprofitability and the issue of losing money, hence overlooking the real problem. As foreign tourists set off on a luxury journey to Turkey, locals were unable to feel special themselves. This is why most of them did not object to the race not being held. Since the majority of Turkish sport lovers make a living the hard way, it seems hard to dream about the Ferrari or Mercedes F1 cars. Turkish people loved the F1, but forgot something else: You will dream of the Formula 1 as long as you can pay for it.
Last Update: May 30, 2014 4:48 pm
RELATED TOPICS