Yassiada to Freedom Island, an attempt to brighten a dark past 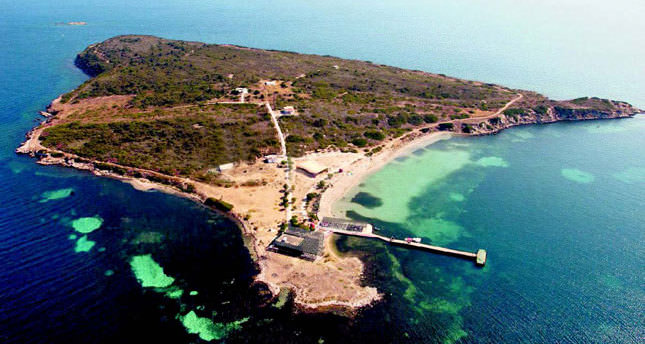 ISTANBUL — Among the holiday islands of the Sea of Marmara sits a rock with a dark past.

Yassıada is now abandoned and decrepit, a ghostly place that was the scene of one of the major political shifts in modern Turkish history.

In the 1960 coup, Prime Minister Adnan Menderes and his foreign and finance ministers were taken to the island by the military, tried and put to death - although the actual execution happened off the island.

The rock has recently been officially renamed the Democracy and Freedom Island, more as condemnation of the lack of democracy that went on there 54 years ago rather than to celebrate any democracy that occurs on the islands. Its electorate would currently sit at zero.

Since 1960, there has been little reason to go back to a rock with no resources and earth that doesn't lend itself to mass development. But now the nongovernmental organization Young Civilians wants to revive the past and give people the chance to stare a dark period of history in the face.

Plans are currently going through the Culture Ministry to turn the island's former gymnasium and naval school into a cultural center while starting development on a hotel and summer camps. The plan is to neither condemn nor condone, just to confront history and educate people on one of the most formative and bloody periods in the Republic's history.

"It is no coincidence why this island was abandoned," said Yıldıray Oğur. "There were dark things here and that is why we want to remember it and educate people on what happened.

There will be a museum and a cultural venue here. What we want is to educate young students to learn about Turkish history, including the dark periods. We want this island to become a hub for entertainment, there is a memory on this island and it is a very upsetting memory and many people died on this island. Adnan Menderes was tortured on this island so there is a long memory here and it's very depressing. It needs to be a commemoration venue. There is a tradition that runs through this island."

The tradition is certainly a dark one. The island's history essentially consists of trials, exiles and murder intermittently occurring all the way back to the time of the Byzantines.

No port will take you to the island; the NGO had to hire a boat to make the one-off trip to publicize the work that is potentially being done there. The island can't be seen through the thick fog off the coast of Sultanahmet and Kadıkoy, but it comes into view just a few minutes after leaving the Bosporus, adding to its haunting aura.

The island has an other-worldly quality to it, one that - as pointed out by a journalist on the trip - in itself is an evocation of the events that happened there; its emptiness.

Tragedy stalks the area. A neighboring rock - and it can be described as little else - was the site of the "Massacre of the Dogs" when in 1910, the crumbling Ottoman Empire tried to rid Constantinople of its excessive stray dog problem. The dogs were exiled but not forgotten. For the last two years, a memorial has sat on the rock commemorating the dogs that died there - another initiative by the Young Civilians.

The NGO is so far unrecognized by the government, but they are listening to it. The Culture Ministry is currently going over plans that the Young Civilians have petitioned for and have openly voiced support for in the past.

"We wanted Yassıada to become the island of democracy 50 years after the coup so we went to the government and asked for it to become a cultural venue," said Ceren Kenar, a journalist and former member of the Young Civilians, who acted as a de facto guide on the tour of the island.

"It is an abandoned island and we want the government to keep what is here and make a cultural center, the democracy museum of Turkey, conference halls, a hotel so there can be summer schools.