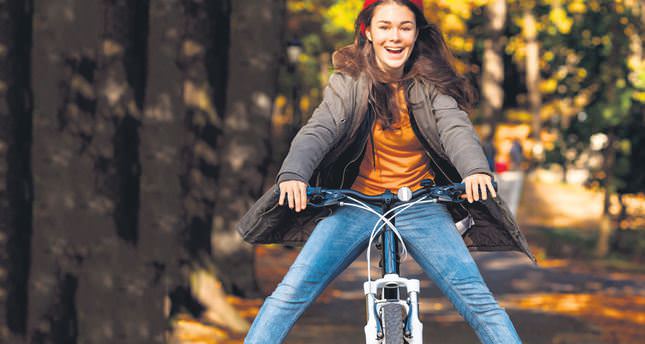 Cycling is an environmentally friendly alternative to transport though unfortunately it is not supported widely by other commuters. Istanbul is however, trying to change this mentality by encouraging its cyclists

When we think about bicycles and consider the most bike-friendly cities, we see that Istanbul is not a frontrunner. There are many cities like Amsterdam, Dublin, Tokyo and Paris with designated bicycle tracks that cover the city like an eco-friendly spider's web.

However, we are not here to stand in awe in their wake but to show where Istanbul prevails and lacks when it comes to supporting its cyclists. When we consider why Istanbul lacks more environmentally friendly riders on the streets, we notice a few reasons.

Istanbul has a rough terrain with many ramps and uneven hills to climb; it is not a city where cycling is a walk in the park. With all that nature throws at us we can't deny that the long roads next to the Marmara Sea are just perfect for cycling. Cyclists often ride for pleasure along the coastal roads, but apart from leisurely riding, it is rather uncommon to see them among traffic, commuting between other vehicles.

The attitude of other commuters is a very important safety factor for cyclists, and often a deterrent. Unfortunately, a culture where bicycles on the roads is appreciated and welcomed is not yet fully established in Turkey, and of course, cars still think they own the road and do not pay any heed to commuting cyclists.

Therefore, aside from the brave few who still shoulder these odds, there is not much commuting with bicycles and those who do it usually have a scar or two to show for it. Traffic in any corner of the world is horrific, but in some places it is mortifying and Istanbul is sadly one of these places. Some may consider cycling a solution to the traffic, and rightfully so, but in traffic, cyclists need law-abiding citizens in order to keep safe. Unpredictable moves by drivers are dangerous for the highly exposed cyclist.

Despite these deterrents, Istanbul still tries to establish credibility of being a bicycle-friendly city. In an attempt to achieve this, several organizations as well as festivals and other similar activities are constantly organized in order to attract people to cycle on the roads and increase rider awareness.

One even tries to take it to a new level by naming itself the first International Cycling Festival. Instead of just cycling on the Bosporus Bridge like in previous years, this festival will be a three-day event on June 6, 7 and 8. Apart from crossing the bridge, many events are planned for the festival ranging from late-night screenings in a camping area to slow races and a first day tour to remember the miners lost in the Soma accident last month.

Turkey's biggest cycling event is of course the Presidential Cycling Tour. This year the 50th of the organization took place between April 27 and May 4. While this event covers the country since its final and most watched stage (Stage 8) is in Istanbul, it counts. Despite the organization doing a great job to promote cycling in Turkey, the lack of Turkish cyclists in the top ranks is a cause for concern. Many cyclists tend to stick to bicycle tracks when they are out there because these roads tend to be a little more secure.

This week, an article dated May 31, 2014 in Sabah by Damla Kayayerli titled "Istanbul finds freedom in bicycles" shared that bicycle tracks currently cover 82.1 kilometers in Istanbul and 34 percent of the urban population owns a bicycle, according to a survey. The same article also says the Istanbul Municipality plans to increase the distance covered by bicycle tracks to 1,050 kilometers.

If you live on the Anatolian side of the city, you are in luck. Long coastal bicycle tracks in Kadıköy, Caddebostan, Bostancı and Pendik will surely ease your thirst for cycling. But those on the European side should not despair either. Bakırköy is the place you should go or, of course, you could rent a bicycle in a more touristic area of the city as well.

As for the non-cyclists, please respect the cyclists around you and try to be extra careful when driving your car. After all, every bicycle on the road means one less car so you should be thanking them for helping to ease the vehicular traffic.

Alternatively, you could join them; and who knows, perhaps you will enjoy this healthy form of transport instead of sitting in a stuffy car all day long.
Last Update: Jun 03, 2014 1:21 am
RELATED TOPICS