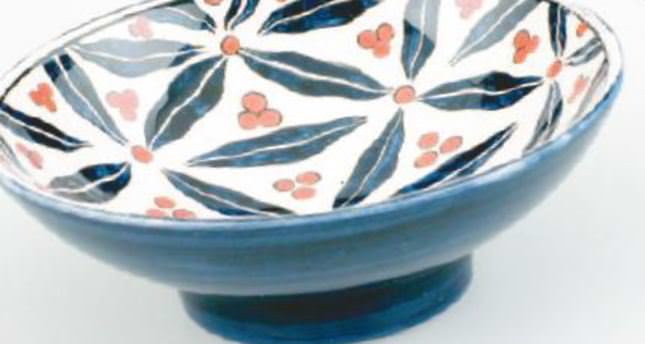 by Ayşe Betül Kayahan Jun 13, 2014 12:00 am
On my last trip to Doha I had the chance to visit the Museum of Islamic Art, which invites its visitors to take a journey from the early Islamic era in the 7th century to the beginning of the 20th century; from Spain in the west to China in the east. The galleries were separated categorized by the names of Islamic Countries. Upon arriving at the museum, I realized that there was an exhibition on İznik and that my knowledge on the subject matter was rather limited. Knowledge of my culture began with the information board at the Museum which read: "The Imperial workshops in Istanbul established a distinctive Ottoman style, seen in luxuries such as illustrated manuscripts, calligraphy, carpets, textiles and metalwork. Best known are probably the colorful ceramics and tiles produced in İznik."

Ashamedly, I must confess that the Turkish art of Çini (glazed tile) had never taken my interest until I realized how elegant and hypnotic the authentic tiles in the gallery were. The tiles were not just attracting the interest of those who laid eyes on them; they were being watched with great admiration. It was at this point that I realized I had been taking for granted the beauty that had always been before me. This forced me to ask myself how much I really knew about the art that is so unique to Turkish culture.

The art of Turkish Çini, which has a great importance in the history of Islamic art, goes as far back as to Karakhanids, Ghaznavids, and particularly the Iranian Seljuk era. With the Malazgirt victory in 1071, the Anatolian Seljuk Sultanate (the Seljuk Sultanate of Rum) began governing the region and during their reign the art of Çini came to be used at some buildings, such as Konya Alaaddin Mosque and Konya Karatay Madrasa. However the tomb of the Seljukian Sultan İzzeddin Keykavus I is considered to be the earliest building known to use the tiles.

The Ottomans inherited the art of Çini making and developed it through the 16th century. Ceramics and tiles began to be produced in the late 15th century. By the mid-16th century, in response to imperial Ottoman demand, İznik potters and craftsmen were producing high quality ceramics, such as dishes, jugs, tiles, bottles and lamps under the patronage of the Ottoman Court of Sultan Süleyman the Magnificent.

The court's patronage supported the development of the ceramic industry in İznik both artistically and technically. These techniques became quite advanced when compared with earlier ones. Contrary to common belief, Çini was not earthenware but fritware, a stone paste combining quartz, clay and frit (ground glass). It was then heated in special kilns at 900 degrees Celsius and decorated with underglaze painting.

With time not only the techniques changed, but also the designs and the colors. Earlier wares were simple in color. They were usually decorated with blue on white. By the 1540's, turquoise and blue became a popular combination. Then the coral red, tomato red, olive green, emerald green and purple began to give color to the tiles and ceramics.

The most popular designs were flowers such as tulips, roses and carnations, which are unique to Ottoman art. Later on, other types of flowers were added on the ceramics such as pomegranates, hyacinths, spring blossoms, lilies, cypress trees, chrysanthemums and clusters of grapes and vine leaves began to appear. Unfortunately, with the decline of the Ottoman Empire, support for the Çini industry waned and the art almost ceased without leaving any information behind. But luckily, the İznik Training and Education Foundation was established in 1993 by Prof. Işıl Akbaygil with the aim of reviving İznik Çini art. After years of research and countless experiments tiles and ceramics were successfully reproduced using the ancient traditional methods of the 16th century and with the same high quality as their predecessors, even after a span of centuries.

Today you can see the magnificent pieces of İznik tiles which were authentically produced by the İznik Training and Education Foundation on the walls of Marmaray stations in Istanbul and many other places such as the building of Borsa Istanbul and Sabancı Mosque in Adana.
There are so many authentic and beautiful masterpieces that belong to Istanbul Monuments such as mosques, fountains and even tombs which are being displayed in the Louvre Museum of Paris and the British Museum in London. It is very well known that these masterpieces were stolen by Çini thieves in the past and sold to rich collectors, unfortunately.

Today there are surviving İznik tiles that exist in plenty of cities throughout Turkey, such as Istanbul, Bursa, Edirne, Adana, and Diyarbakır. In Istanbul tiling decoration can be seen in so many mosques, tombs, libraries, and palace buildings. Prof. Haluk Dursun, the head of the Topkapı Palace Museum, listed these monuments in his book "İstanbul'da Yaşama Sanatı" (Art of living in Istanbul): "Çinili kiosk, tomb of Suleyman the magnificient, tomb of Haseki Hurrem Sultan (Roxalana), tomb of Mahmud Pasha, Sokullu Mehmet Paşa Mosque, the library and the tomb of Selim II in the Hagia Sophia complex, tomb of Şehzade Mehmet, Kara Ahmet Pasha Mosque, and certain buildings of the Topkapı Palace complex such as the Circumcision room, Revan and the Baghdad Kiosks."

Sultan Ahmet Mosque is often referred to as the Blue Mosque since it has been decorated with blue Iznik tiles, but Rüstem Pasha Mosque is the most beautiful surviving masterpiece of Çinicilik (art of making İznik tiles) so far. It was designed and built by the Ottoman imperial architect, Mimar Sinan for the Grand Vizier Damat Rüstem Pasha (who was married to 'Mihrimah Sultan' - the daughter of Sultan Süleyman the magnificent).

Unfortunately we don't appreciate enough the value of our culture, but thankfully today we are in a better place, at least when it is compared to the past. The use of traditional arts increased in the building and designing of new places. Hopefully this article incites you to start your journey of discovering the masterpieces of Çini. So why don't you start from Rüstem Paşa Mosque first?
Last Update: Jun 13, 2014 1:05 am
RELATED TOPICS