The ball that brings the world together 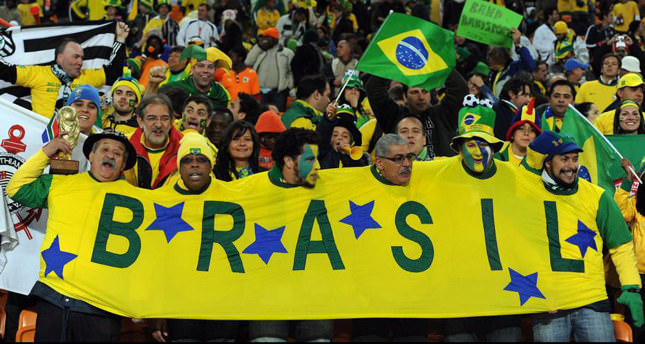 The ball that brings the nation together once every four years is once again here, this time in Brazil's São Paolo. The question on everyone's lips is, "who will make history this time?"

Brazil braced itself for the FIFA World Cup 2014, as the biggest sporting event on the planet kicked off five days ago. Since the inaugural tournament in 1930, the competition has been played every four years except in 1942 and 1946 due to World War II. Thousands of people flocked to Brazil's Sao Paolo city not only to witness history being made, but also to be a part of the breathtaking spectacle, which will produce memories to be engraved in people's minds.

Watched live by one-sixth of the world population, the World Cup has the virtue of being the single sporting event during which different nations gather to compete under a friendly atmosphere. I compare the tournament to religious festivals which aim to reunite people at odds and encourage them to make a clean break. Have you ever seen Argentinian, English, German and French people paying compliments to each other while enjoying an event arm-in-arm?

Leaving aside the sociological aspects of the competition, let's take a look at what we are going to experience at the championship. I would like to start with the hottest and the most-asked question: Who will win the Brazil 2014 World Cup? Many spectators say Brazil will surely win this year. Although Brazilians did not invent soccer, everyone is in agreement that they have added a new dimension to soccer. In other words, Brazil is the best soccer team in the world. It would not be surprising if Brazil wins the tournament being played in its homeland.

According to the FIFA World Cup records, Brazil hits the top as the most successful team, with the most wins and goals scored in the history of the competition. However, it might be stressful for Samba- lovers who have not yet scored a win in their home country.

Spain, the winner of the last three tournaments, and Germany which reached the last eight semifinals are among the favorites.

Bear in mind, Barcelona soccer player Messi is playing for Argentina this year. We should not underestimate the Netherlands, Italy, England and France.

The hopes of European countries are gradually perishing because they were unable to lift the World Cup trophy at any tournament held in the South Africa. Never mind, statistics are always open to change.

Last year, people joined demonstrations across the country against corruption and the lavish spending for the World Cup. There were violent clashes at Sao Paulo's public squares.

Although the impacts of uprisings have descended, the eyes of soccer junkies are following the competition and possible anti-World Cup incidents. Brazilians are well-known for their entertaining nature, but also have enough courage to show their response against any injustice, even related to soccer. Therefore, it is advisable to get ready to watch protests rather than samba performances during the World Cup. Another interesting point will be the long distances between Brazilian cities. The national teams will have to take flights of up to four hours. To avoid any health problems stemming from varying climates, FIFA officials announced they can introduce extra water breaks and provide cold towels to players where necessary.

Despite the aforesaid unfavorable conditions, I would like to wish an enjoyable World Cup for all. Here are some interesting facts about the World Cup history. May the best team win!

The FIFA World Cup in Numbers

The average point for qualification: 4.9

The team with highest participation rate without any championship: The Netherlands (1974, 1978 and 2010)