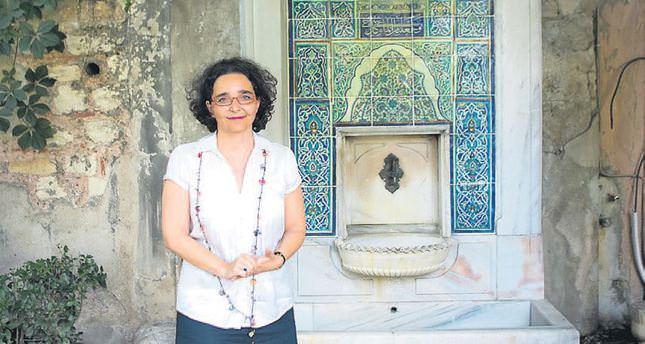 Madame Muriel Domenach came to Turkey less than a year ago. However, her ancestral story stretches back much further in Turkish history. She seems determined to continue down a path set out far back in history

Madame Muriel Domenach, the French consular general to Istanbul, is a petite woman, at least as far as stature is concerned. But there is nothing petite about her energy, imagination or determination. Madame Domenach has been in Istanbul for less than a year, but has undertaken a number of projects and plans that are unusual and inspiring.

I first met Madame Domenach at a dinner, and found her conversation fascinating. We talked about everything from politics to Syrian refugees and the situation of women in Turkey. We found common ground, and we found places where we differed. One thing we do share is our concern for the Syrian refugees, be they in Turkey or in other countries. Indeed we went to visit the Syrian camp together; she patiently listened to the refugees, using her Turkish (which she claims isn't very good, but I beg to differ) to understand, and waiting for a translation when she couldn't. She genuinely cares about the situation, both from the point of view of the refugees and that of the host country. So it is no surprise that she opened her residence, the French Palace, to a poetry conference to mark World Refugee Day on June 21.

The real purpose is to raise or maintain awareness of this problem, which threatens to grow ever greater with the troubles in Iraq. She told me how impressed she is that Turkey has hosted over 1 million refugees. She is very aware that there are problems, but states that this is part of the nature of the situation. She praises the fact that Turkey has taken a humanistic stance, and despite all the drawbacks is determined to house these people, unlike any other country in the region.

The conference on Friday was to raise awareness of what Turkey is doing and what still needs to be done through a poetry recital and conference; this was held with the cooperation of HCR office and the Office of International Migrations.

But this is not all; Madame Domenach is also planning to open the French Palace for an iftar in the month of Ramadan. This has never been done, and as the venue is the French Palace a number of logistic problems have arisen. But totally unfazed, Madame Domenach has gone through most of the red tape, solving the logistics and is going ahead with her plans. One of the greatest logistic problems was to find a place that was not representative or associated with the government in which people can pray. This is not because the prayer is a Muslim ceremony; Madame Domenach tells me how much trouble they had doing an Easter hunt, as they have to be respect the principle of laicism at all times. But this is an iftar with a difference.

After the fast has been broken and prayers have been offered there will be a jazz concert. She is bringing two worlds together and is determined that they meet under her roof. Why aan iftar?

Madame Domenach is doing what she can, even on a small scale, to bring the different sectors in Turkey together. The people who generally come to the palace are of the elite, the "left-wing." So Madame Domenach wants to bring the old, leftwing elite together with the less, right-wing sector, or if you will, the new elite. Madame Domenach is very aware that the Turkish people, the "halk," if you will, have very different problems and outlooks than the people who come as visitors. I was very impressed how as she entered the door, as she was rushing in as visitors were waiting, she took the time to shake the hand of the butler. She stopped, thrust out her hand, and asked him how he was. She is a lady of the people who wants to do what she can to solve the problems experienced in Turkish society of late.

How unique she is, I hear you thinking. Well yes and no.

This is the fascinating part of Madame Domenach's story. Her husband, Olivier Bouquet is an Ottoman historian, currently at Galatasaray. His great great grandfather, Maurice Bompard was the last ambassador to the Sublime Porte, from 1909 -1914 (as Madam Domenach wryly states, having to leave his post under such circumstances is not something that can be considered to be a major success.) Maurice Bompard was more interested in politics, while his wife was more interested in social life and culture. Madame Bompard fell in love with Turkey and, in particular, with Istanbul. She was friends with Prince Abdülmecid, the man who was later to be the last caliph. She was vice president of the Association of Friends of Istanbul, which was headed up by the prince. A direct result of this partnership can still be seen today in the garden of the French Palace. A beautifully tiled fountain stands modestly in one corner, with an Ottoman inscription that reads "Prince Abdülmecid donated the tiles. Madame Bomparte advanced the idea and worked on the construction.

The beauty of nature strikes humankind, and this fountain proves the inclination of her heart to the East." There is also a Quranic verse, concerning water, below the Ottoman inscription. The fountain was designed by Alexandre Vallaury, the architect of Pera Palace.

This fountain was built in 1911, and started to be used in 1912. However, when Madame Domenach came to the French Palace last year, the fountain was worse for wear. The ambassador had put the renovation of the fountain on his agenda.

Madame Domenach and her husband, Olivier Bouquet, were fortunate enough to be in residence when the repairs were carried out.
The example of how Madame Bompard worked with the Turkish society, cooperating and being interested in the culture, is in a way a distant echo of her great great great daughter-in-law; but the gardens of the French Palace contain one more such example. In a corner, humbly standing, is a statue of Humbaracı Ahmet Pasha. Humbaracı Ahmet Pasha's original name was Claude Alexandre, Comet de Bonneval. He came to Istanbul in 1729 to help the Ottomans with their artillery. He converted to Islam and lived his life out in Turkey dying in 1749.

Thus, in the garden of the French Palace, as I sit listening to Madame Domenach talking about her plans to bring together not just the French and the Turks, but also the Francophile Turks with the other sectors of society, I contemplate on how history has laid out this path for her. From Ahmet Pasha to Madame Bompard, the people who have been in and out of this palace have done what they could to promote understanding and empathy between the nations. Madame Domenach is an original; but she is an original on a pattern that seems to stretch far back into the past. At least this is what I contemplate as I look across at the sparkling fountain and then over at the humble man with the dervish cap on his bowed head, listening to the birdsong in the serene garden.
Last Update: Jun 21, 2014 1:35 am
RELATED TOPICS