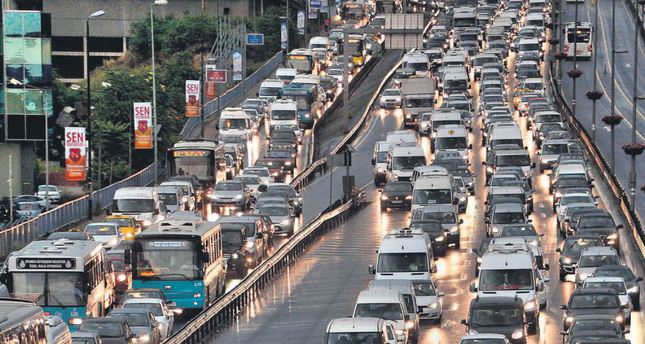 In one popular Turkish TV show, a "tour operator" offers a couple a range of death-defying experiences ranging from climbing the Everest to bungee jumping.

Having done these already, the couple move to leave the stage, when the desperate operator makes his last-ditch offer - a ride in Istanbul's traffic: "You cannot predict when you will get stuck or when you are going to get hit by another car. It will take hours but you still won't reach your destination at the end of the day."

Amazed by his offer of this "thrilling" experience, the couple happily accept. Of course, the show exaggerates reality but it has a point: Istanbul is infamous for its traffic congestion. A recent study by Dutch navigation firm, TomTom, shows that the city has the second worst traffic congestion in Europe after Moscow. Although the government and Istanbul Metropolitan Municipality have been pouring money into the city's transportation system, the pw icture looks worse as car ownership in the city continues to increase.

Many Istanbul locals seem unwilling to exchange comfort for speed. Until three years ago, residents of Istanbul did not have a chance to combine comfort with speed. Now, car-sharing companies such as Mobicar and Mobilizm have emerged to fill this void in the market. Mobilizm, founded in 2011, was the first car-sharing company in Turkey with 60 cars now serving 4,000 people. Mobicar, founded in 2013, has 41 cars and serves 3,500 customers. These companies charge a customer TL 60 (approximately $30) for an initial subscription and TL 0.55 per kilometer.

Mobicar's co-owner, Emir Günel, told Anadolu Agency (AA) that the company aims to integrate its car-sharing service with the city's transportation gird so that it can help remedy the chronic congestion problem. "We want to offer an easy ride to people.

For instance, a customer can arrive at a point in the city with metro or bus and can then rent our car for a limited time. When they finish work, they can leave the car and return home by metro again," Günel says. In addition to convenience, car-sharing makes economic sense to Turkish people because of heavy car taxes and fuel prices. Car insurance in Istanbul is another headache. Günel claims that the company's hourly rent system allows its clients to save a lot of money: "This system is practical and economic. It is an alternative to car ownership," he stresses. Nihan Şerbetçi, Mobilizm's marketing manager, agrees with Günel, saying that carsharing is economical for Turkish people.

Moreover, "it is also good for the environment and the solving [sic] traffic congestion problem," she adds. Mobicar's Günel believes the government and Istanbul Municipality can help car-sharing companies grow.

However, he admitted that so far neither the state nor local government has provided any incentive or assistance to car-sharing companies. "This is because they could not appreciate car-sharing's potential. Although the impact of car-sharing is currently limited because these companies have a limited number of cars, as the number of vehicles increase, officials will get involved in helping to make car-sharing a strong option for Istanbulites to get through the city," Günel said.

İspark, Istanbul Municipality's parking lot operator, told AA the operator believes that the car-sharing scheme will be good for the city, adding that it is considering providing services to them. However, the official stated that car-sharing, rather than carpooling, may be a better option for solving Istanbul's congestion problem. Car-sharing, however, remains very vague and lacks an unquantifiable clear impact on the traffic problem. One such company, Volt, was established recently but does not have wide coverage and thus only very few residents use it. Nevertheless, car-sharing is becoming more visible on the Internet and promises convenience and efficiency.

Haluk Gerçek, professor of transportation at Istanbul Technical University is not optimistic on car-sharing's impact on congestion. He says that carpooling or car-sharing is likely to have only a limited influence on the city's traffic problem. "Public transportation is key. Other options will not provide a solution," Gerçek stated. Even if car-sharing makes economic and logistical sense, Turkish people do not prefer sharing their "private space" with others, he added. Some on social media are more optimistic: a user posted on Ekşisözlük, a popular social media site in Turkey, that carpooling is economical and easy to use. "It is cheap. Companies are reliable.

Cars are brand new." "No cost or tax. You can use it as long as you need. Thus, it is very cheap," another user commented. The growth figures provided by company officials also point at the car-sharing scheme as likely to grow in the near future. Mobicar began its service with 12 cars only to increase it to 41 over only 15 months. Similarly, Mobilizm has increased its year-end target for number of customers and usage for 2014 in the middle of this year. Car-sharing's popularity has increased. Mobilizm's Şerbetçi said that some people had a hard time understanding what is going to be shared by clients. "Some questioned why they are going to share their car without really understanding the scheme," she said. Now, many people know what car-sharing is, its aim and convenience. Mobicar's Günel voiced his hope that the company will provide a service with 1,000 cars within a short time due to the huge interest they have received so far.

Günel's vision is to park a car at every corner of the city so that clients will not spend time trying to find a car. "This sector will expand considerably," he said, adding that rent-a-car companies will also jump into that gap in the market. Istanbul's traffic congestion will be a point of satire for years to come regardless of the huge investment by the government or the municipality as the city expands further.

Although public transportation is the key to solving traffic congestion in the city, schemes like car-sharing present another possibility for some to bypass congestion in Istanbul.
Last Update: Jun 26, 2014 1:58 am
RELATED TOPICS