Çınar: The heritage of an Ottoman dream 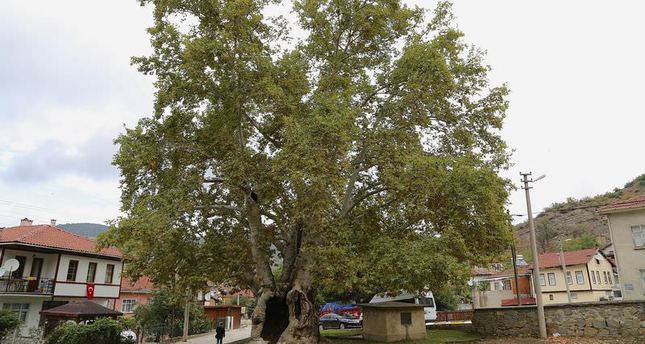 The çınar tree has an important place in Turkey which stems from the Ottoman Empire. Known to represent "greatness, permanency, superiority and sovereignty" the tree continues to live in the present while holding on to an important stor y of the past

It started with a dream. But first a little background. Osman, founder of the Ottoman Empire, while still a young prince, began to visit the well-known Sheikh Edebali, renowned for his purity and education.

Upon one visit he accidentally saw the sheikh's daughter, Mal Hatun, and fell deeply in love. He began to visit the sheikh more often and confessed his love for the sheikh's daughter. Sheikh Edebali, however, would not give his consent for Osman to marry his daughter because their social positions were too distant.

One night at the sheikh's residence, he was melancholy thinking of his unrequited love for Mal Hatun that had captured his heart for the last two years. He spied the Holy Quran as he was lying down to sleep, but due to his piety and respect for the holy book, he removed it from the shelf and began to recite the suras, continuing for six hours that night. The time for the morning adhan was approaching and Osman, exhausted, fell fast asleep with the Quran still in his hands and began to dream:

Osman saw himself lying close to the sheikh, from whose chest rose the full moon (symbolizing Mal Hatun). The moon descended from the sky and sank into Osman's chest and disappeared. Then, a plane tree began to grow - it grew and flourished and became ever bigger. The tree sprouted greenery that cast a shade on the entire horizon, covering the whole of the three continents of the world.

He then saw four mountain ranges beneath the tree's ample canopy - the Caucasus, Atlas, Taurus and Balkan ranges. From the roots of the tree burst forth four great rivers - the Tigris, Euphrates, Nile and Danube, the waters of which were teeming with ships of all kinds. The fields were laden with ripe crops and the mountains were draped with forests. The land was verdant green and the sky shone brilliant blue. Through this abundance sprang streams and fountains that flowed through gardens of cypresses and roses. In the valleys, Osman saw dazzling shining cities of great architecture.

The golden domes of the mosques shone brightly with glittering golden crescents at their apexes and muadhdhins reciting the call to prayer from the towering minarets. Every type of singing bird was there in the giant tree, whose leaves were in the shape of scimitars, and their melodies mingled with the sounds of the adhan. All of a sudden a great wind began to blow that turned the points of the scimitar-leaves toward the great cities of the world, but especially toward Constantinople - the city that rests between two seas and two continents like a diamond set between to sapphires and two emeralds - the most precious gem of the ring of a great empire. Osman saw himself slipping the ring onto his finger when he awoke.

In the morning, Osman recounted his dream to Sheikh Edebali who interpreted it as a good omen of Osman's honor and power telling Osman that Allah will give him and his progeny sovereignty and that his son will rule the whole world. The sheikh no longer opposed Osman marrying his daughter and gave his blessing for Osman and Mal Hatun to be wed.

Assistant Professor Fatih Özçelik explained to the İhlas News Agency that this is how the Oriental Plane tree (Turkish "çınar) gained its significance.

Oriental plane trees have always been very important in Turkish culture - even since before the Ottoman era it symbolized greatness in pre-Islamic Turkic societies.

As a result of Osman I's dream, when building a mosque or a namazgah (open air mosque) planting a "çınar" and installing a fountain within the courtyard has become a traditional trinity symbolizing the conquests of the Ottomans. When the Ottomans conquered a new land, they planted a plane tree near water as a seal of "greatness, permanency, superiority and sovereignty."

Oriental plane trees are well known for their longevity and durability. They can survive for centuries even when the inside of the trunk has rotted.
They grow to 30 meters or more in height, which is why it is believed that planting a plane tree next to a mosque protects its minarets from potential lightning strikes.

Recently, in Beçiyörükler, a village in Düzce province, a 700 year-old plane tree which was 15 meters in height and 25 meters in diameter was split in two as a result of a lightning strike, leaving the nearby minaret untouched beside it.

Nowadays, Oriental plane trees are thought of as monumental trees since they have witnessed the centuries. However, this is not the only reason. It is known that Ottomans always planted a plane tree next to something important, which could either be a monumental building such as a mosque, fountain or a tomb of a significant person. For example, a plane tree was planted by Akşemseddin, the head teacher of Sultan Fatih the Conqueror, by the tomb of Ayyub al-Ansari, who was one of the companions of the Prophet Muhammad. It still stands today where it was planted centuries ago.

Even if you see a plane tree without anything near it, you can assume that at some point there was something important at its side. The most famous plane tree of all time was the "Tree of Hippocrates" on the island of Kos, which was mentioned by Evliya Çelebi in his "Seyahatname" (Book of Travels). According to the legend it is believed Hippocrates (considered the father of medicine) taught his pupils the art of medicine under this tree. Paul of Tarsus purportedly taught here as well. The current tree is only about 500 years old, but may possibly be a descendant of the original tree which allegedly stood there over 2,400 years ago, in Hippocrates' time.

When the Island of Kos was conquered by the Ottoman commander Gazi Hassan in 1776, it was renamed İstanköy. Since there was already a plane tree there and following the tradition of conquest, he ordered for a mosque to be built with a fountain beside the tree. Hence, today the tree of Hippocrates resides in the Platia Platanou (Square of the Plane tree) in front of the Castle of Knights and next to the Gazi Hassan Mosque at the center of Kos. Next to the tree is a white fountain with Arabic engravings, also built by the Gazi Hassan.

There are still many monumental plane trees in Turkey today, with most of them in Istanbul, İznik, Bursa and other cities in Anatolia. The grandest plane trees in Istanbul are located in Eyüp, Alemdar, Sultan Ahmet, Emirgan, Topkapı, Atik Valide and Mihrimah Sultan Mosques (Üsküdar), Çengelköy, Göksu, Beykoz, Bebek, Rumeli Kavağı and Anadolu Kavağı. "History is not written only in history books or learned solely from historians, but it sometimes is reflected under the shade of a plane tree or in the sound of the water of a fountain by the tree or in a tea cup of a coffee house of [under the shade of ] a plane tree for the ones who are able to see and feel it." says Professor Haluk Dursun, the historian, in his latest book "İncir Çekirdeği" (Fig Seed).

It is highly recommended to sit under a plane tree in Çengelköy or Emirgan, facing the Bosporus, feeling the sweetness of the breeze and witnessing the moment as a companion of the monumental tree before it rots and dries.
Last Update: Oct 07, 2014 6:10 pm
RELATED TOPICS