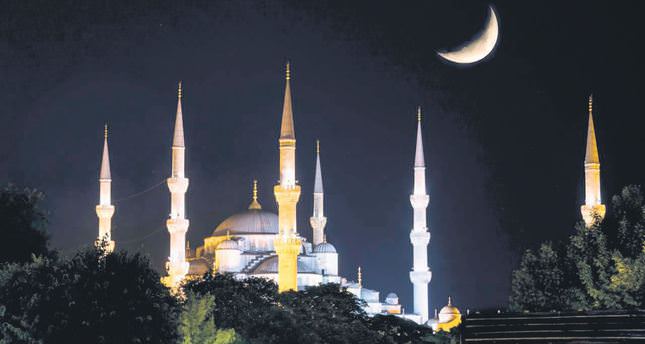 Ramadan is the one month of the year in which traditions and forgotten customs are remembered and brought to life. The end brings a celebration of joy and happiness

With its unique spiritual atmosphere Ramadan has always of utmost importance to Muslims since the beginning of Islam up to the modern day.
Every Ramadan, people, especially the eldest members of the families, tell the stories from their childhoods with a great deal of nostalgia for Ramadans of their youth. I can remember a different air of Ramadan. So where does this nostalgia for Ramadan coming from? Let's have a journey back to the Ottoman Empire and see what remains.

Many centuries ago people used traditional methods to determine the beginning of the holy month by sighting the new moon as there was no technology advanced enough to make reliable predictions. Ottomans also followed this method for determining the beginning Ramadan. They would employ those with a sharp eye from various parts of the empire to look for the clear sign that the hilal (crescent) was present, signaling the beginning of a new month according to the Islamic lunar calendar.

Once a single person among those employed saw the hilal, he would inform the qadi (muslim judge) in front of the court with two witnesses present saying: "I testify that I saw the hilal at this hour, tonight is the beginning of the month of Ramadan." After this information was confirmed, the holy month of Ramadan would officially start. Mahya (light illuminations) masters, who waited outside the court, were informed of the beginning of Ramadan so that they could broadcast it to the people from mosques' minarets. The first person to inform the court of the hilal along with his two witnesses was rewarded by the court.

Just before the arrival of Ramadan, the government of the time would publicize an official announcement of admonitions (varaka-i mahsusa) that people were required to obey.

In doing this, the government attempted to ensure people's peace and welfare during Ramadan. In the announcements, the necessity of the cleanliness of houses, streets and shops were given special importance. Showing respect to women in the streets or in shops was also emphasized. People were warned that the sultan might make public visits, wearing civilian clothes so as not to be recognized. But, if by any chance someone did recognize him, the announcements described how to behave correctly. Shops and bazaars were the most visited places by sultans to check if the Narh prices were applied properly or not.

Narh prices were certain decreased prices determined by the government for main food items - a type of a price policy used to prevent gratuitous price-gouging to ease the shopping costs of the poor during Ramadan. Narh records were delivered to imams (Muslim religious leaders) to be given to the shopkeepers.

Since Ramadan is also the month of charity, there were many different traditions in addition to zakat and fitra (special forms of Islamic alms) to help the poor during Ramadan such as Sadaka Taşı (charity stones). These stone pillars, which are almost the height of a person, stand in mosque courtyards. The top part of the charity stones were like a bowl. Rich people come to the mosque for the evening prayer and afterward they left some money in the bowl.

At sunset, the poor would come and take as much as he needed and leave the rest of the money so that other people in need could have some money from the charity stone as well. Through this practice, the poor were saved from feeling shame or embarrassment from their economic status.
In Turkey and the Balkans today, inherited from Ottoman culture, there are still a few charity stones left. While going to Üsküdar on the Doğancılar slope, a charity stone that was renovated by the Üsküdar Municipality can still be seen.

Hanging bread was another type of Ottoman charity tradition that was not peculiar to Ramadan alone, but it was mostly practiced during Ramadan. A person who was buying bread for himself would also buy bread for a person in need. He would hang the second bread from a hanger that stood in front of the bakery. Some wealthy Ottomans also visited shops and would ask if people had debts by shopping on credit. This was another way of giving charity.

The Prophet Muhammad is reported to have said: "Your slaves are your brothers and Allah has put them under your command. So whoever has a brother under his command should feed him of what he eats and dress him of what he wears. Do not ask them [slaves] to do things beyond their capacity [power] and if you do so, then help them." In light of this hadith, the Ottoman government organized social life by prescribing different working hours in order to ease some of working peoples' burden of fasting and to provide enough time for worship during Ramadan. Also, because the last 10 days of the holy month have a special status that comes from the recommendations and acts of the Prophet Muhammad, they were taken off by the government so that the believers could perform itiqaf (devoting oneself completely to worship for 10 days and nights by staying in a mosque).

In addition to the spiritual side of Ramadan, there was also time for entertainment. People fasted by day and were busy with prayers, but after breaking their fast with the evening meal the nights were full of joy and entertainment.

All around the city during Ramadan buildings, especially mosques, were illuminated with oil-lamps. The city was blinking with mahyas, the lanterns that were strung between the minarets of selatin mosques (those commissioned by sultans), displaying illuminated religious messages such as "Hoş geldin ya şehr-i Ramazan" (Welcome to the month of Ramadan) at the beginning of Ramadan, or "al-Firaak" (Farewell) at the end of the month. Mahya culture was characteristic of Ramadan at that time and still continues today.

There is no doubt that one of the most characteristic aspects of Ramadan is the davulcular (drummers). During Ramadan drummers were charged with the duty of waking up the faithful for sahoor (pre-dawn meal) by playing drums and reading poems. At the end of Ramadan, the drummers would visit houses to collect tips for their service. Today this tradition is still exists to maintain in Turkey despite the complaints of people who prefer alarm clocks.

I think the reason for this nostalgia for a Ramadan of days long past is the spirit of union and togetherness that we understand prom the past. In the Ottoman eras, people got ready with great excitement for the coming Ramadan with a lot of preparations - from the filling of the cellars with food to cleaning the houses for a blessing month together with the state. They were taking a shape for Ramadan. Today, unfortunately, people are stuck in the moments of modern life, full of stress and urgent duties. They can't adjust their daily routines according to Ramadan. Hence, this prevents people from realizing the real meaning of the Ramadan and is inescapable. Today we yearn for past days as we can't feel the unique taste of Ramadan.
Last Update: Jul 18, 2014 1:11 am
RELATED TOPICS