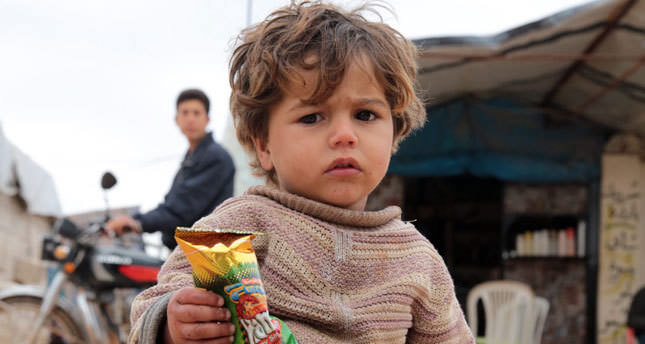 July is traditionally a time for summer holidays, the month that all children look forward to throughout the year. How sad that this year so many children have lost their lives in this month

This year Ramadan falls in July; the month of Ramadan is always a time of reflection, both on one's own state and that of the world. This Ramadan has been one full of images of children; Palestinian children dying in Gaza, Syrian children being caught up in the conflict at home, or trying to recover from the trauma in Turkey. July is the time of summer holidays, when children are running in and out of the water at the seaside, making sandcastles, eating ice cream or biting into a huge slice of watermelon. These are the iconic images of summer.

Here in Turkey, another traditional time for children looms. In 10 days 'Eid, or "Şeker Bayramı" will be upon us. Traditionally children go from door to door, collecting sweets. They knock on their neighbor's door and when the door is opened, the children chant "May you have a blessed 'Eid" and ceremoniously thrust out a plastic bag for sweets. Much like the American Halloween, people stock up on sweets to distribute to the children on the eve of 'Eid. Unlike the American Halloween, this collection of sweets has not been commercialized, and there is still an aura of innocence in the transaction.

However, the innocence of childhood is unfortunately a rare commodity these days. Seeing Syrian beggars on the streets of Istanbul just brings this home. The beggars are there with their children, for it is the children who are guaranteed to tug at the heartstrings. As cars pull up to traffic lights the children come running, clutching a sweat- stained sign which reads "I am from Syria.

I am fleeing the war. Please help me." These children should be in the camps which have schools and medical help. No, actually, they should be playing tag and reading books, not standing by stop lights waiting for the lights to turn red.

The numbers of children fleeing Syria are so great; those who are in the camps are given education there, but those who are here in Istanbul find it hard to get to school. The Syrian school fees are kept as low as possible, even waived when possible; but for some families it is still hard to find the couple hundred lira needed for a semester's tuition. The situation is so severe that a group of young Syrian school children have come together to raise money for other Syrian children to attend school. They don't want to see their friends denied an education.

Children are struggling to make sure other children have an education. A noble sentiment. But one that speaks volumes about the world we are living in today. If you look at children's lives throughout the world today, these Syrian children could be called the "lucky" ones.

They are not being kidnapped and inducted into wars as soldiers, soldiers to fight battles that they know nothing about. Nor are they being killed by bombs dropped by a cruel dictator or a demented foreign state in some ridiculous struggle that makes no sense even to us grownups.

Take the latest death tolls in Gaza; as of last night, this number reached 215 Palestinians. Of these, approximately 25 percent are children. The shocking sights of small bodies on a beach in Gaza City are burned into our consciousness. These four boys were killed on a beach. A beach. In July. What is more natural than boys and girls be playing on the beach? After the attack occurred, a number of children, distraught and wounded ran to a nearby hotel, seeking help. From this we can understand that a number of children were playing on the beach when the Israeli army targeted it, killing four children, leaving them lying broken on the beach.

The Israeli army called this a "tragic outcome" of the targeting of Hamas "militants." When have we started referring to the armed forces of an elected government as "militants?" And when have military targets been located on a beach, near hotels, where children are playing? And have we really become so desensitized as to refer to deaths of children as "outcomes?" There is no clearer indication that the bombing of Gaza is targeting civilians than the fact that 25 percent of the casualties are children.

If, as Israel claims, the targets were Hamas strongholds, and if Hamas, as Israel claims, was a terrorist organization, children and civilians would not be dying. But Hamas is the democratically elected government of a people who are struggling to survive. Thus, any attack against Hamas is an attack against the people, and children and innocent people are doomed to be caught up in the massacre.

This week has been one that has not only seen these tragic deaths in Gaza. It has also marked the anniversary of the Srebrenica massacres, in which more than 8,000 Bosnians, both men and boys, were killed. The rows upon rows of caskets seem to have taught us nothing.

So as we reflect on life during Ramadan, as we slow down to evaluate where we are going and where the world is going, we need to contemplate the situation for children.

Children in the past, those who died at the hands of Hitler. Those who died in Bosnia. And children today. Those who are fleeing the war in Syria. And those who are dying at the hands of those who fled Hitler. The irony is too cruel to contemplate. When one extinguishes the life of a child, one extinguishes a light for the future. It is no coincidence that children are dying, that it is the young who suffer.

At a time when children should be playing on the beach, with their greatest worry being that their mother is out there, hovering with sun screen, waiting to pounce, news of more and more deaths of these innocents are popping up on our screens. No matter what your politics, your religion, your beliefs, stand up for the children. Speak out, march, protest. Let your voices be heard. What should our voices be saying? Let the children play.
For God's sake, let them play.
RELATED TOPICS