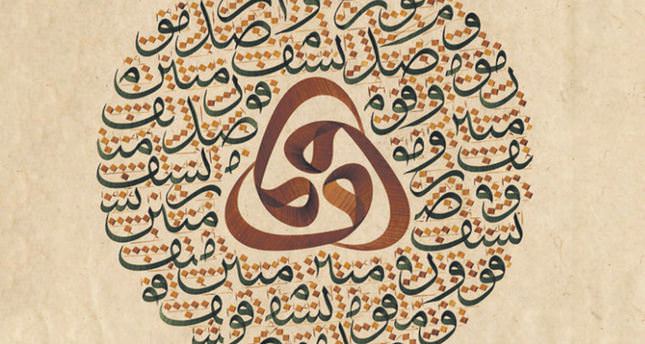 Learning the art of Ottoman Calligraphy from his teacher Hamid Aytaç, Professor Hüseyin Öksüz's works adorn mosques across the world while he teaches the dying trade to his many apprentices in Turkey

Professor Hüseyin Öksüz a renowned calligrapher from Konya began his calligraphy journey with his teacher Hamid Aytaç in 1970. His amazing calligraphic talent and keen eyes led him to adorn many mosques in Turkey and around the world.

Öksüz is known for his contributions to revive the art of calligraphy through his success in competitions and has also trained numerous students. He has thus far been awarded the Outstanding Service Prize by the Turkish Grand National Assembly (TBMM). He introduced new calligraphy artists at the Konya Chamber of Commerce (KTO) Karatay University despite his advanced age of 70. Speaking to Anadolu Agency (AA), Öksüz said the famous calligrapher Hamid Aytaç, who later became his teacher, was the turning point in his life. Öksüz reminisced over the first lessons he took from his teacher: "I continued taking lessons for more than 10 years. When I went back to Konya upon completing my degree in pharmacy, I carried on taking lessons through written letters. Finally I received permission to teach. One is not recognized as a true calligrapher if they have not received verification and permission from his teacher, who would have also received verification from his teacher and so the chain of license continues.

Permission to teach is vital. Calligraphy is a sophisticated art because it gives importance to such rules." Öksüz noted that the competitions organized by the Organization of the Islamic Conference (OIC) changed his life and he became a world-renowned calligrapher. The Research Center for Islamic History, Art and Culture (IRCICA) in Istanbul began holding calligraphy competitions in 1986. Öksüz took part in the competitions while studying with Aytaç. His talent and dexterity led him to win first place, first honorable mention and second honorable mention and become the most awarded calligrapher in Turkey. He attended the second competition when IRCICA began to organize it every three years. When his students started to take part in the competitions, he stopped entering competitions altogether. Öksüz was presented with an achievement award at the International Bagdad Islamic Calligraphy Festival for his work that was in the top 10 of 706 works.

Öksüz said that after these competitions, calligraphers from around the world started to recognize and acknowledge each other. He received requests to write calligraphy on mosques in Turkey and other countries. "I wrote the calligraphies of a mosque that was built in Sydney, Australia. I also wrote the calligraphies of a huge mosque in Germany and the Rotterdam Mosque in the Netherlands. There are mosques in Kazakhstan and Kyrgyzstan where I wrote calligraphy. A new mosque has been built in New York, U.S. Its doors were made in Konya. I wrote the basmala [bismillahirrahmanirrahim] and kalimah [testament of the oneness of God, la ilaha illallah Muhammad ar-rasulullah] on the doors. I have many works that are exhibited in museums," said Öksüz. Continuing teaching at KTO Karatay University, Öksüz said that he has given permission to 20 of his students to teach. He also noted that 5 or 6 of his students are waiting his permission to put down their names under their calligraphy.


Öksüz said that calligraphy is the hardest and the most divine art among other art forms in Islam. As there is an expert in every art form, Islamic Caliph Ali is the reigning expert of calligraphy. Beginning in the 7th century, calligraphy has been passed down from hand to hand, master to student and was practiced in the Seljuk and Ottoman eras. Calligraphy became a popular art form in the Ottoman Empire thanks to Sheikh Hamdullah - from then on, calligraphy was improved upon in all Ottoman provinces. It was the only type of writing that Ottomans used in all communications.

Pointing out that there were times when calligraphy was put aside in Turkey, Öksüz said that that time has passed. "This delicate and beautiful art was in the mud. But just like gold does not lose its value when it is covered with mud, calligraphy did not lose its [value]. Turkish people protect and learn this art with its youngsters, elders and students. Turks are the best nation who performs calligraphy. There is a saying which proves it: 'The first revelation of the Quran came to Muhammad in Mecca, it was read in Egypt and it was written down in Istanbul,' " said Öksüz. He further stated that the most important evidence is the success of Turkish calligraphers at international competitions organized by the IRCICA.