The summer of Stand Up Paddle: SUP comes to Turkey 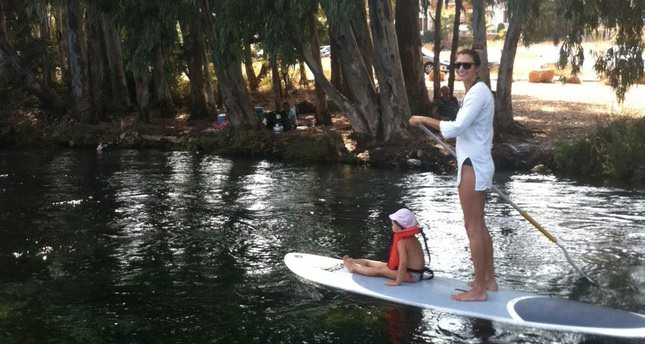 With summer here, water sports and leisurely activities is the best way to entertain yourself and top up on that tan. Turkey's luscious sea and beautiful coves are a wonderland for the fastest growing water sport in the world: Stand Up Paddle Boarding, otherwise known as SUP

It may have taken a decade to get here, but Stand Up Paddle Boarding has officially arrived in Turkey and is fast becoming the most popular new water sport of the summer. Stand Up Paddle Boarding, which is also referred to as SUP, originated in Hawaii as an offshoot of surfing, allowing surfers to not only go further distances and faster to gain a better vantage point, but also enabling them to catch more waves in every set. Over the past decade, however, it has taken off as a water sports category of its own, and sea and sun lovers all over the world are now jumping on the proverbial bandwagon, which in this case happens to be a surfboard, to try this new sport.

SUP involves standing on a surfboard and using upright oars to navigate. SUP can be done in all sorts of bodies of water, ranging from ocean, seas, lakes and rivers, and is an excellent way to work on your cardio and gain balance and strength while enjoying a more relaxing water sport. Being such an accessible and versatile sport has made SUP the latest craze in water sports, and it is fast catching wind in Turkey. With the perfect calm crystal-clear seas conducive to the sport and the country's endless azure coves, Turkey offers the ideal environment for the sport of SUP, which has already become the newest trend in Turkey's popular coastal destinations.

Fellow expat Naomi Worthington Altunsoy has devoted herself to bringing the sport of SUP to Turkey. Naomi and her Turkish husband Hakan, who met and married in San Francisco, discovered SUP while vacationing in Hawaii. "I fell in love with SUP because it is so easy and accessible to everyone, yet I always feel like I've gotten a great workout and had a lot fun when I'm done. Being on the water is such a wonderful experience, it really feels like a meditative experience," says Naomi also sharing that on that Hawaii trip they paddled alongside groups of sea turtles and saw humpback whales jumping in the distance.

Naomi, who was born and raised in California, moved to Bodrum in 2008 with her husband, who she co-owns a water sports wholesale distribution company with, which includes two SUP brands -- Haute Boards and Aquamarina and the SUP accessories brand Nocqua in addition to scuba diving equipment from Intova and Amphibian Pro. Haute Boards not only has the largest selection of SUP boards in Turkey, but also offers rental boards
and yoga classes.

In fact, Naomi is also bringing SUP yoga to Turkey also. A certified FloYo Fit instructor, Naomi will begin offering weekly lessons on Aug. 13 at Café Sail Loft in Gündoğan. Naomi says, "Practicing yoga on the water demands great balance and gives you a great all-over body workout with an emphasis on the core muscles. Doing yoga on the water is a unique experience that makes you smile and feel great."

Naomi is also the author of the blog Paddle Board Turkey, which is an excellent resource for people who want to try SUP in Turkey. "The blog's goal is to give SUP-lovers information about the sport in Turkey, including connecting people with rental companies and recommending beaches for paddle," says Naomi.

You can check out her blog at paddleboardturkey.blogspot.com.

I asked Naomi what she recommended for newbies like me wanting to try SUP out. Naomi suggests starting off by renting a board from one of a number of rental locations along Turkey's coast or arranging a longer-term rental from www.hauteboards.com, the latter of which she says is popular with those going on a blue voyage or chartered boat trip. "Most people learn SUP in the first 5-10 minutes," explains Naomi, adding, "You will fall once or twice until your body learns to balance on an unstable surface, but once you learn, you will retain that muscle memory. It's like riding a bike."

As for boards, Naomi recommends a stable and durable board to start-off with such as the Haute Board 10'4 Pilot, which utilizes Duratec technology rendering it virtually indestructible and retails for 820 euros (TL 2,354) including the paddle. For something a little more professional and streamlined, Naomi recommends an epoxy board with bamboo decking, which start from $1,200 (TL 2,574) and weigh just 10 kilograms. There are also a number of inflatable SUP boards, which save space and are much easier to travel with which are great for beginners and are also available at Haute Boards and start from $795.

More and more locations that rent SUP boards and provide instructions and tours are popping up throughout Turkey. Fener Beach in Akyarlar, Café Sail Loft and the Lena Erdil Windsurf Center in Ortakent are options to try out the sport in Bodrum. Other popular spots for SUP include, Gökova Rüzgar , Capasunta Alanya, the Çeşmealtı Windsurf Club and Seven Capes in Kayaköy, Fethiye, while the Istanbul Windsurf Center offers the chance to try out this new summer sport in the city.
Last Update: Aug 04, 2014 12:06 pm
RELATED TOPICS