Museum of transport and Engineering 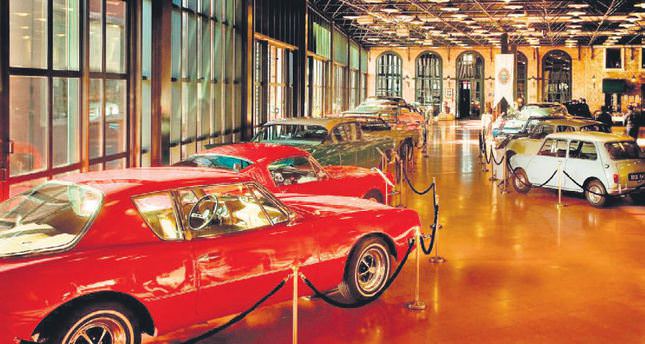 For all automobile and engineering enthusiasts, the Rahmi Koc Museum is a car-lover's heaven with its extensive collection of cars, carriages and all things commutable

Museum of transport and engineering is ironically difficult to find. Maybe that's because I'm relatively new to the city and the bus system of Istanbul can be confusing. Either way, it was worth the wait to get there.

Immaculately presented, well-marked and spacious, the museum is one of the best organized exhibitions in Istanbul. The museum has an extensive collection of installations, including an intimidating array of classic cars that speaks to the heart of your average motor junkie, as well as interactive installations for children. It's also one of the few museums you will ever see that has a submarine sitting outside.

Based in the Hasköy district of Istanbul next to the Golden Horn, the Rahmi Koç Museum is based in refurbished buildings that used to be an anchor casting factory as well as a ministry building. Airy and spacious, it's nice to venture inside if only to feel cool air during the oppressive summer heat.

Starting with a personal homage to the eponymous owner and founder of the museum, it is an obligation to look at the personal effects of Koç that include some random trinkets of former Prime Minister Bülent Ecevit's typewriter as well as Ercüment Batanay's lute, not to mention heaps of Atatürk memorabilia including a snippet from a Vanity Fair article that essentially talks about how much the great man liked to enjoy himself.

Once you enter the nuts and bolts of the museum, pun intended, the classic models begins to appear. Like any transport dominated museum, there is a disproportionate amount of representation for German, British and American engineering.

The first train section is almost exclusively British while the U.S. dominates the motorcycle area and Germany of course flexes its muscles in the automobile sections.

There is however some fascinating Turkish models around the museum. The tram section, just off the opening train area, has a car from the first tram system in Istanbul as well as a replica of Sultan Abdelaziz's imperial carriage that took him to Paris for the 1867 World Exhibition - the first and last time that the caliph went outside of his sovereign territory on a peaceful mission.

Unlike a lot of museums - but like all good ones - the Koç Museum provides excellent context with background and technical information on almost every exhibit. The Istanbul tram isn't just marked, it gives a history of the tram system in Istanbul such as how the first route, which was between Azapkapı and Ortaköy in 1872 and was horse drawn, as well as how the Asian side of the city had to wait 54 years to receive its own tram link - a doomed attempt in Kadiköy that went bust after a lack of money and the outbreak of war.

Sultan Abdelaziz's trip to Paris is also vigorously revisited. Going back into the main building, the caiques and motors section and the navigation area are packed with vehicles and parts, more for the adult than the child, but interesting nonetheless. A left turn takes you outside to a more maritime feel as well as a fake market street with a beautiful 1936 Austin that you are allowed to sit in. A trip back inside takes you to the real motor-head's paradise.

The steam engine and saw mill sections are filled with heavy pistons and interactive dioramas that give even the layman a full understanding of how steam power worked and revolutionized the world. With single and twin cylinder engines decked in the iconic Industrial Revolution green, this is truly a section for those with an eye for engineering and a passion for seeing what makes the world go round.

To make it all the more climatic for such an individual, the neighboring Dr. Bülent Bulgurlu Gallery and the Erdoğan Gönül Gallery are packed to the rafters with some of history's finest and most precious classic cars, going from Benz to the Ford Model T, early Chevrolets and Buicks as well as the obligatory regal Rolls Royce and Jaguar cars. For every glamorous Bond car, there is a throwback to an era where garish was good. The faux futuristic Otosan Böcek is a superb monument to garish chic, while other Turkish models such as the Anadol and Tofaş give a glimpse of the country's first steps into the automotive industry.

Between the two galleries is a small agricultural section not to be dismissed during the classic car haze. After all, there would be no industry without agriculture. The area actually holds one of the best local exhibits, a Fordson tractor used by Atatürk on his model farms has helped to introduce the
Turkish people to modern farming techniques, accompanied by a video showing Atatürk doing just that.

After a quick stop at the café, a turn up the nearest flight of stairs takes you to the children's area, with interactive props as well as transparent kitchen appliances that show how the machines work.

A step outside takes you to perhaps the most breathtaking exhibits. The TCG Uluç Reis Submarine S-338 stops you in your tracks while the DC-3 Passenger Plane and the B-24 Liberator are magnificent in size and scope. The F104 Starfighter at the entrance and the Douglas DC-3 "Dakota" are intimidating specters hanging above the gate.

The fighter jet salvaged from the bottom of the sea is also an eerie sight. It was a full day and an exhausting one, but well worth trying to find.
Last Update: Aug 12, 2014 1:53 am
RELATED TOPICS