The Ottoman History Podcast is spreading like the empire it covers 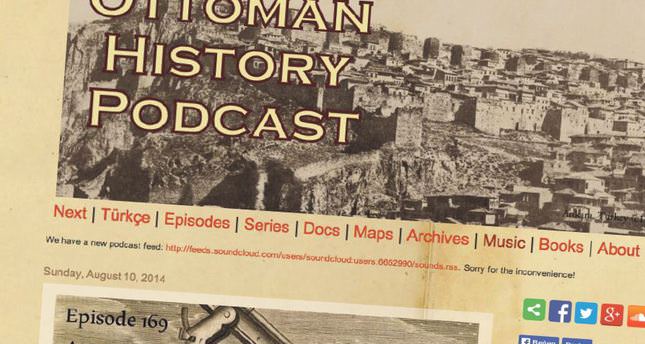 1453 the Ottoman State was transformed into an Empire with the conquering of Constantinople. It continued to grow as more lands were conquered, leaving their mark on the pages of history. Chris Gratien and Emrah Safa Gürkan remind the world today via their podcasts

Starting three years ago, Chris Gratien and his extensive network of Ottoman- era experts have created a one-stop-shop for all things Ottoman, covering topics from mining and science to painting, to an everextending network of loyal listeners. The project began as a way for Gratien and Emrah Safa Gürkan - who teaches at 29 Mayis University - to learn and broadcast the subject they were studying at Georgetown University. Starting with a small group of listeners, the podcast now has 17,000 regular listeners, becoming an authority on the empire in their own right. The trouble is, Gratien isn't far from graduating. Fear not, however, the podcast won't just live on, it will expand its borders to neighboring countries. "We won't stop," Gratien told Daily Sabah. "Even though my academic research takes up more of my time, actually in a way, this is more important because it has a broader reach. We've really added a lot…I'd like to take this model and expand it beyond the Ottoman world all together, India, China, Africa, the whole thing."

The podcast began in March 2011 as an "experiment aimed at finding an alternative form of academic production that explores new and more accessible media, and allows for a collaborative approach." This week saw episode 169 released, covering Astronomy and Islam in late Ottoman Egypt, a fairly esoteric subject, but the kind of topic that makes the podcast what it is. The model itself is an agreeable one, and easily applied to other things. Gratien and his colleagues speak to students or professors who are currently researching a subject related to the Ottoman Empire, making the information as up-to-date as possible while also allowing them to look at a particular subject under the microscope, rather than paint with the broad brush strokes that most history podcasts do.

Esoteric is almost the name of the game; Gratien himself is doing dissertation research examining the social environmental history of the Adana region of southern Anatolia from roughly 1860 to 1960, particularly concerned with the impacts and experience of the forced settlement of pastoralist tribes as well as Muslim immigrants during that period. But the more specific and the detailed the subject matter - particularly if it has modern relevance - the more popular the podcast. "We have done a lot of episodes on Palestine that have been very popular," Gratien told Daily Sabah.

"From Turkey, a lot of our episodes that are on Christian minority groups or identities, episodes on Armenians work very well, so does gender and sex equality. What's is exceedingly popular is stuff like that from that period; those are the topics that really interest people. "A lot of the feedback is indirect. We listen to requests, but we are indirect in listening to the audience. I have to credit some of our early audience for our development, like encouraging us to get better recording equipment, the early recordings were done with our laptop microphones, but we invested in better quality recording equipment upon the suggestions of our audience. People [definitely] appreciate the real microphones! We were also concerned about gender balance. While students and professors are more or less 50-50 in the U.S., the people with a platform to speak about history are predominantly men. That's a big thing for us." "I realized when we were doing our research that I was reaching quite a big audience. I didn't anticipate that, and afterwards, we started to take a more methodical approach, constantly thinking about our source material, what topics, who we want to speak to, and basically, with academics."

As anyone with even a modicum of knowledge of the Ottoman Empire will understand the empire's relevance to the modern world. The world's highest profile conflicts at the moment are happening almost exclusively in former Ottoman territories. The Palestinian-Israeli conflict, the Syrian civil war and the Islamic State of Iraq and Al-Sham's (ISIS) bloody charge through the Middle East are directly related to the fall of the empire and post-World War I colonialism. Civil wars in Lebanon as well as uprisings in North Africa all have their roots in the Ottoman Empire, its social and political structures as well as its breakup.

Understanding the modern "I would agree with that statement," says Gratien. "I would say that when understanding, it's always important to have historical context. If you don't put it in context, then it makes things very difficult. Historical context is important with the Ottoman Empire, and it can help get rid of confusion."

It was the current troubles in the Middle East and how they have affected the way Americans feel about the Middle East, that attracted Gratien to the Ottoman Empire. Coming from a small town in New York, Gratien is a long way from home, and he and his colleagues are making a difference abroad, educating a new generation of eager students - most of whom are from Turkey. "It is precisely the political troubles about the Middle East in the U.S. that drew me. In other words, it was an apprehension about the Iraq war, the negative role of the U.S. in Israel and Palestine, hostility towards Iran with sanctions and what not, [et cetera]. I felt that there was a serious problem with the way that Americans view the Middle East. It is not the Middle East is a troubled region, but rather the U.S. government and society have a troubling attitude towards countries in the Middle East."

"The project allows us to bridge some gaps between the Anglophone academia and the people here. "I graduated from high school in 2002, I had a sense that there were a lot of political issues in the U.S. regarding the Middle East, so I wanted to pursue the Middle East. I learnt Arabic for a little bit, and I learnt Turkish for a number of years. "I don't have any family connections to the Middle East, as U.S. security often ask. I'm just a student trying to be a professor."
Last Update: Aug 14, 2014 2:12 am
RELATED TOPICS