Horses, karambol and history: A village unchanging from a father to a son 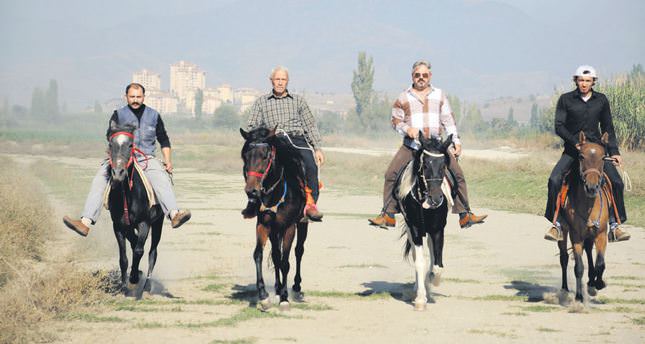 Visitors to Tire, a populous district of the western port city İzmir, can now enter a traditional museum of blanket makers, blacksmiths, confectioneries who continue the craft in shops founded by their grandfathers: Their traditions remain

Tire is a haven for traditional arts and crafts. In addition to the old professions locals also participate in age-old sporting events. A mix of cultural influences shapes the city. Locals raise camels at their homes to participate in the camel wrestling events that have existed for 700 years. The first metal money was produced here. Jews who emigrated to Tire from Andalusia in 1492 brought the game "karambol" and it is still played today. In the kitchens Turkmen, Jewish, Roma, and Yurok flavors mix.

The mezzes served utilize 30 different types of herbs from the surrounding mountains. Here there are master craftsman from lines of craftsmen as long as six or seven generations. Rahvan horseracing that began during the Aydinid dynasty continues to this day in Tire. But this is a special kind of horseracing, unseen in many areas. Horses do not run, they prance. Numbers of well-bred horses amble through the meadows, and the 6th century Ali Bey Hanı operates as a horse hotel. Tire was once one of the most important stops on the Silk Road; its hans and horses were famous, providing rest and entertainment respectively. Of them, a number is still functional, including Ali Efe Hanı. When you enter inside the doors of Ali Efe Hanı in the city center its as if your senses have transported you to an older time, you are flooded with the feelings of a Silk road merchant.

Hundreds of years earlier the courtyard were used as stables for the horses and the travellers were offered rooms on the top floor. Now, there are only horses. But even at this time it is possible to be offered a room as if you are a visitor. This han also acts as the Tire Rahvan At Yetisticileri ve Binicilik Spor Kulubu (Tire Rahvan Horseracing and Riding Sports Club). On the matter of caring for the horses, there are experts on hand who take turns staying at the han and they provide the horses with private care and ready them for the competitions. The horse races span hundreds of years, but they are not as one would normally imagine.

Rather than riding the horse as fast as the animals can manage riders guide the horses to prance. Horses perform a quick jape and their legs move together in precision. This differentiates the sport from one of standard horseracing. There are a great number of horses able to gallop, but only a small group of horses prance correctly. These races are held often from Kars to Ordu, from Denizli to Canakkale. However, the ones taking place in Tire have connections to the Aydinid dynasty. The number of horses eligible to compete is limited.

During the Roman, Byzantine, and Ottoman periods horses needed to undergo something akin to an education course in order to race. Horses that participate in prancing competitions are also, understandably, adept at ceremonial promenades. There remain tales passed down through generations of particular horses.

The 45-year-old musician Adnan Arturk's father was a horse trainer, as was his grandfather. And of course, they always placed bets on the horse races. It is not clear when exactly horse racing first came to Tire. Before Tire the races were only held in the Aegean region. In the past four years interest in rahvan horseracing has swept the four corners of Turkey.

Tire Mayor Tayfur Cicek has spent a great amount of effort to maintain the traditional ways. Cicek is a mathematics teacher well-liked in the area and the child of a family with deep roots in Tire. The racing area undertaken on his initiative has been named one of Turkey's best tracks. The last big event took place in May 2013. Coming from every corner of the country 150 horses participated and 25,000 TL in prize money was disbursed.

There is a game known as karambol only in Tire. Shaped out of wood from boxwood trees and embossed with oak, the game's board is 4 meters wide and 12 meters in length. It is somewhat like billiards, but played with one's hands. At the moment there are 200 people that know the game well. Due to this a group of volunteers has formed a club to preserve the game.

There is a very similar game in Spain, leading players to believe it came from Andalusia during the expulsion of the Jewish population. The township is organizing for Spanish Karanbol to travel to Tire for some friendly matches. Hopefully, this is a sign of Tire's continued devotion to preserving traditional arts.
Last Update: Aug 25, 2014 2:02 am
RELATED TOPICS