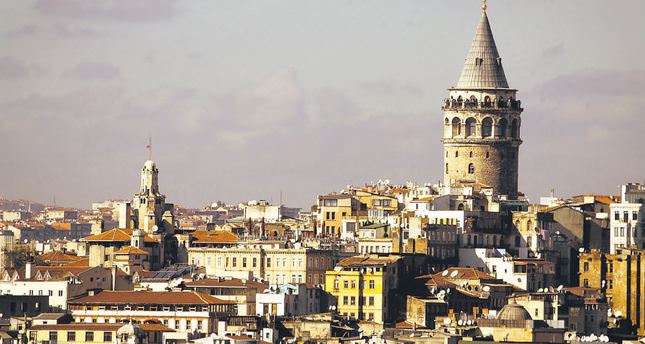 It is not its unique cylindrical shape or the fact that it stands at 66.9 meters that makes this magnificent building so astonishing. It is the spectacular view of Istanbul that one experiences upon reaching the top deck of this glorious tower that echoes the stories of heroes and villains

On the north of the Golden Horn, Galata Tower, known as Christea Turris in Latin, (the tower of Christ, which supported a spire and a cross on top) when it was built by the Genoese in 1348, has several theories regarding its name. According to Italians, the name comes from Calata, which means downward slope, as the neighborhood descends to the sea from a hilltop. Greeks, on the other hand, believe that the name comes from either Galaktos meaning milk, as the area was used by shepherds in the early medieval period, or from Galat meaning Celtic in Greek for the Celtic tribe of Galatians who were believed to have lived there during the Hellenistic period before settling into Galatia in Anatolia. Today it is simply known as Galata Tower as it stands tall as one of Istanbul's most prominent landmarks in Galata and Karakoy.

There are a few speculations as to who is responsible for building the original tower that was largely destroyed in 1204 by Latin crusaders, but it is estimated to have been built during the reign of the Byzantine Emperor Justinian the Great in approximately 527. The medieval stone tower extends 66.9 meters (nine stories) into the sky as its intended use was to act as a watchtower. The city's tallest structure was a vantage point to look out to old Istanbul on the opposite side of the Golden Horn.

In 1509 an earthquake that shook the very foundation of the country left the building damaged and in ruins until the famous architect Hayreddin restored it. The tower was then put to use by Sultan Suleyman the Magnificient during the time of the Ottoman Empire and used it as a jail for prisoners who were sentenced to work at the Kasımpaşa Naval Dockyard. At the end of the 16th century astrologer Takiyeddin Efendi went on to build an observatory deck on top of the tower. It was in this tower that in 1638, Hezerfen Ahmet Çelebi, an early aviator, reportedly flew across the Bosporus to Üsküdar on the Anatolian side using artificial wings attached to his arms. According to the traveler Evliya Çelebi, his talent and the winds made his experiment a great success and brought the tower great recognition.

The 17th century saw the building used by the Ottoman janissary band of musicians known as Mehter takımı. The great height the tower possessed made for an ideal fire observatory after 1717, but ironically the tower once again was heavily damaged by fire in 1794. The tower experienced yet another restoration, but this time gaining a small room made of wood. Following yet another fire in 1831, Sultan Mahmud II added another two floors and covered the top of the tower with a famous cloth in the shape of a conical hat. A strong storm in 1875 left the roof damaged only to be repaired in 1960.

Today Galata Tower is a tourist attraction. An elevator only goes to the seventh floor and visitors must climb the remaining two stories. The restaurant at the very top will satiate one's appetite while the 360 degree panoramic view of Istanbul's beauty is captivating with a view of the Bosporus, the Golden Horn, Blue Mosque and every other monumental landmark Istanbul has to offer. An evening visit will have you dance the night away with some Turkish entertainment.
Last Update: Aug 27, 2014 2:18 am
RELATED TOPICS