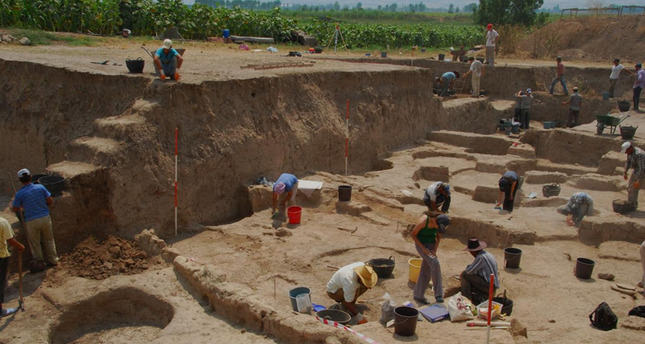 A pair of neolithic footprints that are estimated to be left behind from 6,450 B.C were discovered by a group of scientists at one of the oldest sites in the region of Barcin Mount, Bursa.

A set of adult footprints that have been estimated to dated back to 6,450 B.C. were discovered at Barçın Mound, a late Neolithic site located in the Yenişehir district of Bursa province.

Co-director of the excavations and Koç University Assistant Professor Rana Özbal, in her statement to Anadolu Agency (AA), said that the excavations have been carried out since 2007 under the auspices of the Netherlands Research Institute in Turkey and with the consent of Turkey's Ministry of Culture and Tourism. Özbal pointed out that the site, which is known to be the oldest in the region, dates back to around 6,600 B.C. She said that houses in the mound were built adjacent to each other, which is unique to this site. She further said that they discovered ceramics in the lower layers indicating that pottery had started in the region by that time. Özbal said the discovery is important since it was a first for the Marmara region.

During the excavations, scientists also discovered a pair of foot prints in front of a house in the mound dating back to 6,450 B.C. According to the experts, owners of the houses first plastered the ground floor with mortar mixed with chaff. The mortar was found on a wooden timber and the footprint was made while the mortar was still wet. The house burned at some time but the print remained in the dried mortar and survived to the present day. Özbal said, "There are two layers of mortar. The bottom layer features the prints and the upper layer covers it. Maybe they plastered it again thinking it was spoiled due to the prints. According to radiocarbon tests, the prints date back to 6,450 B.C."

She said that during the construction of Marmaray, a lot of footprints were discovered at the Yenikapı excavations, adding that they believe these prints in the Barçın Mound are much older. "Considering the Marmara region, these Neolithic Age footprints are the oldest," said Özbal.

Conservation expert Evren Kıvançer, who has taken part in various archeological excavations in Turkey, said that he is working on the footprints found in the Barçın Mound and that these prints could not be preserved at the excavation site to turn them into artifacts, but that they had to take the prints out of the site to stabilize them. "First of all, the conditions in which the prints were discovered were very important for us. The footprints were cooked and became hard thanks to the fire. This made our job easier," Kıvançer said.

To stabilize the footprints, scientists first scraped the upper layer and strengthened the findings at the site. As experts worked on the prints, other bone artifacts and similar objects were unearthed. The prints were cut out of the ground and brought to the laboratory after five days of work. The strengthening process continued at the laboratory. The layer featuring the footprints was supported by some materials and mortar so that the prints will be preserved until they are exhibited at the museum.

Kıvançer said that he has never worked on an artifact like these prints before and pointed out that the footprints document the moment. He emphasized that these prints can be worked on scientifically adding, "Experts can determine the height, weight and age of the owner of the footprints." He said these prints have been wellprotected by stabilizing the conditions. "This is a rare, original and special discovery. We can pass this artifact on to future generations," Kıvançer concluded.
RELATED TOPICS