Shujaiya: A neighborhood in ruins 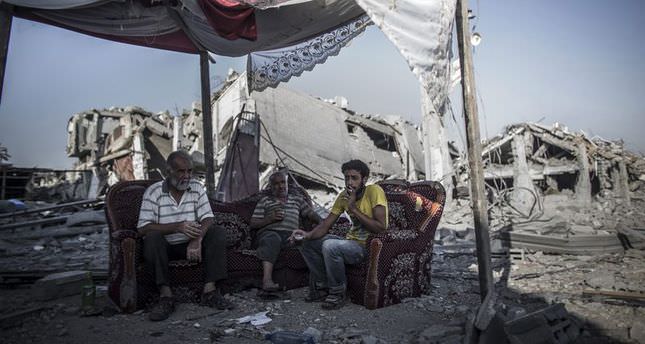 Residents of Shujaiya neighborhood reveal the detrimental effect the Israeli attacks on the Gaza strip have left behind. Reduced to nothing more than rubble and cloth tents, the absence of basic needs such as clean water, electricity and accommodation has left this neighborhood living a primitive life

The last Israeli offensive on the Gaza Strip led to many Palestinian civilian deaths and further destroyed what infrastructure remained from previous battles. The 51-days of Israeli attacks ended with a recent cease-fire, and neighborhoods like Shujaiya, which had a high number of casualties, were reduced to ruin.

Palestinians who survived the onslaught are struggling for life in tents cobbled together from cloth next to their destroyed homes. Much of the country has been leveled, and those who lost their homes are forced to live a primitive life. The residents of Shujaiya spoke to an Anadolu Agency (AA) reporter about the region's current situation. Some of them said that conditions after the Israeli attacks took them back 100 years. Presently, Gazans suffer from lack of basic needs such as clean water, electricity and accommodation. Epidemic diseases might even break out at any time due to the sewage flowing along the streets and tents. Sixty-five-year-old Zainab el-Hissi prepares meals on a handeddown cooking stove for her family under the hot sun. "Israel destroyed our homes while burning agricultural farms and products. There is nothing left behind. We are forced to live here with many hardships. I cook meals on a wood fire and wash clothes by carrying water. There is no electricity or appliances," she said, pointing to her destroyed house. "Only two rooms are left after Israeli soldiers attacked my house where 11 people were living together. One of the rooms collapsed last week," el-Hissi continued. Until the house is repaired, her family has to sleep in a tent. "I neither know when someone will rebuild my house nor how long we have to stay here," she said. El-Hissi's neighbors are also living under similar conditions in the region where the seven-week offensive left many people homeless.

Her son Naim agreed that the country's infrastructure went back to the conditions of decades earlier. "We may face epidemic disease any time," he said. People also experience difficulty in finding clean water. "We light a fire at night to avoid insects. My little radio is the only thing reminding me we are living in the 21st century," he added. Similarly, 63-year-old Haji Ibrahim is another elderly victim of the Gaza war living in a flimsy tent in front of his bombed house. "It has been 24 days that I am staying here. I survived bombs, but my health is getting worse. Israel not only killed our children, but put us in primitive conditions," Ibrahim said. Israel carried out military attacks on Gaza, which has been under a years-long air and sea siege, on July 7 followed by ground attacks 10 days later. Air strikes continued although the Israeli army withdrew. On Aug. 26, a cease-fire agreement brokered by Egypt between Israel and Palestinians ended the attacks in the Gaza Strip. It was announced that more than 2,147 civilians including 578 children were killed during the war and more than 11,000 people were injured. On July 20, more than 70 Palestinians died during the attack in Shujaiya with over 400 casualties.