Latife Hanım: More than just the wife of Atatürk 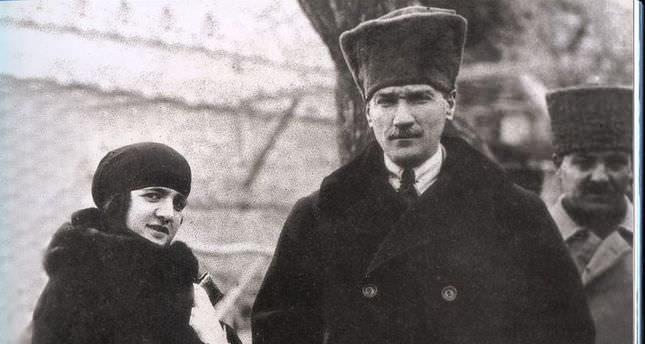 Commonly known as Latife Hanım, she was a sophisticated, well-educated, stubborn, smart and decisive young woman whose courage should be admired and appreciated

Everyone has a different story. It is of no matter that some look more impressive than others, all are of great value. Also, each story has two sides of the coin.One of them belongs to a woman whose life is cloaked in secrecy although she passed away 39 years ago. Fatıma-tüz Zehra Latife Usakkizade, or commonly known as Latife Hanım, was the wife of Mustafa Kemal Atatürk, founder of the Turkish Republic, whose statues fill public squares, portraits are issued on Turkish banknotes and quotes are recognized as wise sayings. We all have a different portrait of Latife Hanım in our minds shaped in the light of either favorable or negative views of a sensational life. If you read more about her, it becomes clear that she did not deserve to live in the shadow of her husband. Official accounts describe her as an impolite, aggressive and impertinent woman, yet Latife Hanım, without any doubt, should have been judged in a fair and proper way. Let's now take a closer look at her with reference to existing historical information and memories that have survived to the present day. Latife Hanım was born in July 17, 1898 in Izmir to a well-educated and rich family. Her father worked as the metropolitan mayor of Izmir. Her uncle was famous Ottoman and Turkish novelist Halit Ziya Usaklıgil. At those times, it was very rare for a girl to study in Europe, however, she was lucky enough to attend the Paris Sorbonne University to study law and later, she took English courses in London. The highly talented woman spoke seven languages including Latin. She could also play the piano and ride a horse. Although Latife Hanım represented the style of a modern 19th-century woman, she used to recite the Quran, and despite Atatürk's insistence, did not drink alcohol for religious reasons.

The life of such a sophisticated, well-educated, stubborn, smart, decisive and young woman, whose courage should be admired and appreciated when they are mentioned in more detail in further sections, coincided with Atatürk during the occupation of Izmir. In September 1922, Turkish troops marched toward Izmir to find a general headquarters.Her family's mansion was suggested as a safe place and Latife Hanım sent him an invitation letter. Atatürk and his soldiers were hosted there for a while. When his mother, Zübeyde Hanım, had to go to Izmir for health reasons, Latife Hanım also welcomed her at her home. Although it is not certain, Zübeyde Hanım presumably suggested to her son to marry Latife Hanım.
Upon his mother's death, Atatürk paid a visit to Latife Hanım. He attempted to have a closer relationship but she politely refused. Indeed, Latife Hanım showed her feelings for him at first, however was unable to continue an out-of-wedlock relationship. Even further, according to rumors from her aunt, Latife Hanım fired a gun into the air three times when Atatürk tried to kiss her on the terrace. She showed him what she was really made of by saying she would kill herself on his fourth attempt because he was necessary for the country, but she was not. Atatürk always said to his closer friends that marriage is not his cup of tea, but could not resist Latife Hanım's smart and moral character and proposed to her. Atatürk was already aware of who he was going to marry. This challenging woman was able to influence the man, who was 17 years her elder. His admiration of Latife Hanım's character pushed Atatürk toward a marriage that he did not consider before. There was no better role model except her for the image of a "modern Turkish woman" on Atatürk's agenda. With regard to his family and educational background, Atatürk moved to a higher social class with the wedding ceremony held in Latife Hanım's mansion, although he was seen as "the hero of the War of Independence." The married couple continued their life in Ankara where she re-designed the Çankaya Mansion.She brought her personal servants to her new home where she hosted many prestigious receptions. Latife Hanım accompanied Atatürk during his trips across Turkey and delivered many speeches. Moreover, she was the person who wrote her husband's first speeches.

Latife Hanım conducted studies on women's rights and suggested he make new laws regarding polygamy and unilateral divorce.The couple's marriage, which was either based on mutual affection or a modernization project or both, shattered after a short while due to Atatürk's drinking problem and life style. Indeed, there is not much known about the end of their marriage, but all accounts led to the same story. One night, the Çankaya Palace hosted an official reception for Turkish and foreign charge d'affaires. As usual, Atatürk asked his wife to recite a poem and play the piano for the guests. At that time, Latife Hanım was complaining about Atatürk's receptions with alcohol that didn't allow the
couple to enjoy time alone. She refused to play the piano and Atatürk requested her cousin Vedat play instead. While Atatürk was thanking him for his performance, Latife Hanım jumped over toward her husband and said, "He played incorrectly, but nobody noticed. Why did you allow him to continue?"Then he answered, "Everyone noticed, except you." Latife Hanım furiously slapped her fan in her palm and cut herself. Her husband tried to slap her, yet she smeared her blood on his face while guarding herself.. Unfortunately all of this occurred in front of his commanders and diplomatic officials. Australian and American ambassadors sent encrypted messages that said, "Atatürk's wife slapped him in front of commanders," "The Turkish Republic's founder lost face," "A coup may break out any time." He could not tolerate such humiliating views and said, "Marriage is not
associated with my nature, but I wanted to set an example with my wife." The model marriage lasted only two and half years.

After they divorced, Latife Hanım returned to her father's home and never saw Atatürk again either because of her disciplined character or Atatürk's decision. Despite her modernist and reformist beliefs, her expectations were like those of other women. Latife Hanım only wanted to enjoy a well-organized life with her husband. I believe it was difficult for Atatürk to end his marriage, which was the face of a campaign, when he laid the foundations of modern Turkey. The more her secret memoirs unveil, the more her story challenges the popular conceptualizations of her.