Sailing to save lives 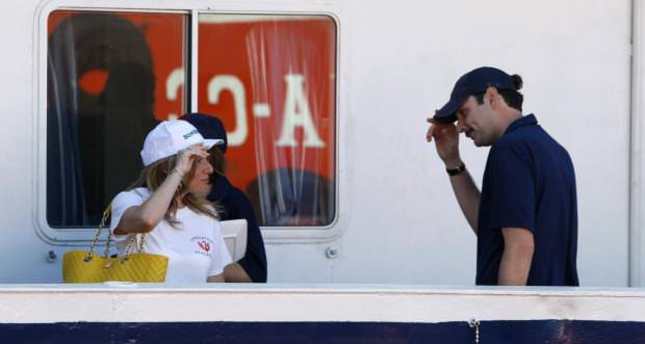 by Selçuk Eren Sep 16, 2014 12:00 am
Philanthropist couple Regina and Christopher Catrambone have spent millions of euros to rescue people in trouble on the Mediterranean Sea, which has become the watery grave of countless migrants fleeing from their countries. They have saved the lives of 2,000 migrants since August using nothing but their own ship. Regina is a successful Italian businesswoman who has lived in Malta with her American husband Christopher for the past seven years.

The millionaire couple is only in their 30s, yet instead of enjoying a life of luxury sports cars or private yachts, they prefer to devote their time and money rescuing several hundred African migrants. Regina answered my questions regarding their interesting story. "Everything happened a few months ago. We were sailing in the Mediterranean on a yacht and saw a white coat floating in the water. I told the captain to get closer.
We found a dead body of an African migrant who drowned while crossing the Mediterranean trying to get to Europe.

At that moment, we decided to do something for them," she said. Last October, when the Catrambones watched the news about the death of more than 360 migrants near the Italian island of Lampedusa, they rolled up their sleeves to take immediate action. The couple named their project "Migrant Offshore Aid Station" (MOAS) and bought a 43-meter ship they called "Phoenix" that is equipped with state-of-the-art technology. Later, they purchased two drones, night vision cameras and two dinghies for emergencies. The ship sailed with 16 crewmembers, most of whom are retired naval officers. Brigadier Martin Xuereb, who formerly served as Malta's Chief of Defense, heads the privately funded rescue mission, and Christopher and Regina barely have to leave the ship as the crew carries out rescue operations for two months. Their ultimate aim is to prevent loss of life at sea by protecting migrants fleeing from Africa to Europe.

Christopher describes the mission as the world's first private institution to help migrants at sea. "The death of migrants who set off for a new beginning is unacceptable. It is an honor for us to save the life of any of them," he continued. I asked Regina how many people they had rescued so far to which she replied: "Phoenix weighed anchor on Aug. 26 and our first mission finished on Sept. 14. However, we have started a new mission lasting until Sept. 20. Our budget only enables us to spend 60 days at sea. So far, we have directly rescued 500 migrants, and on Sept. 11, we helped the Italian Navy rescue 390 migrants. There are 100 migrant children that we delivered to officials. We even saved a two-day-old baby once. Some of the migrants were from Syria and Palestine, but mostly they were African people who want to go to Europe."

Speaking to the BBC, Christopher underscored that they need a $2 million budget to be able to spend 60 days at sea. Regina continued talking about their daily routine and migrant rescue strategy. "We start the day by getting together with the crew and setting a program for the day. Our two drones find boats that carry migrants. Phoenix then gets close, and we go to the boat. By that time, our crew gets in touch with the coast guard.

We gave lifejackets, water and food until the coastal guard from Malta or Italy arrives. If the boat is filled with migrants and the boat is bilging, we take some of the migrants on Phoenix. According to UN Refugee Agency's (UNCHR) data, more than 124,000 migrants came to Europe via the Mediterranean, and 100,000 of them have reached Italy since the beginning of this year. The crises in Syria and Libya are the main reasons for these high numbers.

Moreover, Israel's Gaza attacks increased the number of refugees. However, most of the migrants come from African countries, especially from Somali and Eritrea. The UNCHR's report reveals that over 2,000 migrants died in the Mediterranean from the beginning of the year with 1,600 of these deaths happening since June.
Last Update: Sep 16, 2014 10:30 am
RELATED TOPICS