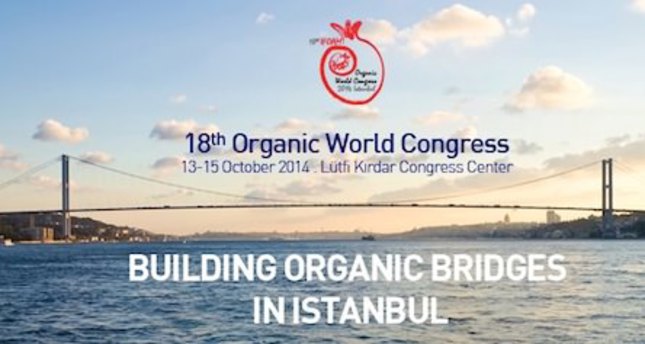 Istanbul will host the world's largest and most important organic congress next month Oct. 13-15. Held under the theme, 'Building Organic Bridges,'. The world's heavyweights in organic agriculture will have a meeting of the minds at the 18th IFOAM Organic World Congress hosted by Buğday

This year, Istanbul will be hosting the 18th IFOAM Organic World Congress held Oct. 13-15 at the Istanbul Convention Center. The International Federation of Organic Agriculture Movements (IFOAM) is an association that has been around for over four decades, aiming to lead, unite and assist stakeholders from every facet of the organic movement.

IFOAM has evolved into a global association with about 800 affiliates in 120 countries with a vision of the worldwide adoption of ecologically, socially and economically sound systems that are based on the principles of Organic Agriculture. The IFOAM Organic World Congress is organized every three years in a different country, this year the host city being Istanbul. The congress, which will have three plenar y and eight breakout sessions with more than 250 presentations by leaders of the organic movement, gathers more than 2,500 people from the organic sector worldwide, who will be sharing experiences, innovations and knowledge about the organic world, with special emphasis placed on the hosting country. Bar none, this is the leading event for the development of the organic sector worldwide.

Hosted by the Buğday Association for Supporting Ecological Living in Istanbul, which has been the crossroads between the East and the West for thousands of year, the 18th OWC is being aptly held under the theme "Building Organic Bridges." Speaking with Güneşin Aydemir, the president of the Buğday Association for Supporting Ecological Living, she described the upcoming congress as, "a significant event that spans the social, ecological, economical, scientific and cultural, tackling all aspects of organic agriculture. This congress brings together opinion leaders who are engaged in worldwide efforts on the matter, giving them a chance to get to know one another and share their experiences and ideas. It is extremely important for our countr y for this communication network to be gathering together in Turkey," she explained. When asked how many people they anticipate attending, Aydemir said they are expecting approximately 1,500 participants.

The congress will be in English, and a number of very important members of the organic world will be keynote speakers, such as Will Allen, a pioneer in urban agriculture, and Pat Mooney, the winner of the "Alternative Nobel Prize." Author of "The Economy for the Common Good," Christian Felber will also be a keynote speaker, as will Lyonpo Yeshey Dorji, Bhutan's second democratically elected Minister of Agriculture and Forests, and Rasit Pertev, the secretary of the International Fund for Agricultural Development (IFAD), a specialized agency of the United Nations, just to name a few. On the sidelines of the congress will be an exhibition held for scientists, institutions and companies to present their work. There will be a preconference held two-days prior to the start of the congress concentrating on national organic development, and the IFOAM General Assembly, in which over 600 organizations democratically elect the board, will be held the two days following.

Meanwhile, there will also be a number of side events such as film screenings and field trips to organic markets and other tourist sights. On Oct. 18-19 there will be overnight excursions offered to Bolu, Bursa, Çanakkale and Cappadocia.The congress will be held at the Istanbul Congress Center (ICC), Turkey's biggest convention center, conveniently located in the central Harbiye neighborhood of Şişli and the official congress hotel will be the nearby Divan Istanbul 5-Star Luxury Hotel.

Although IFOAM affiliates, Buğday members and students are subject to discounts on registration costs, normal registration for regular participation is 640 euros and 435 euros for Turkish citizens, with one-day tickets costing 250 euros. Certified organic farming began in Turkey in 1984 and has since experienced a boom with organic farmers markets and farms popping up all over the country. Don't miss this chance to be a part of the largest and most important meeting of the organic sector in this exhilarating city, which has embraced the movement with fervor. I asked Aydemir if there was any way people could help or volunteer their time to such an important cause to which she said there were a number of ways people could contribute, from volunteering with the Buğday team to preparing for the congress and side events to help covering the costs of organic farmers attending the event. To find out more about the upcoming 18th OWC, check out: Owc2014.org İnfo@owc2014.org
Last Update: Sep 17, 2014 6:20 pm
RELATED TOPICS