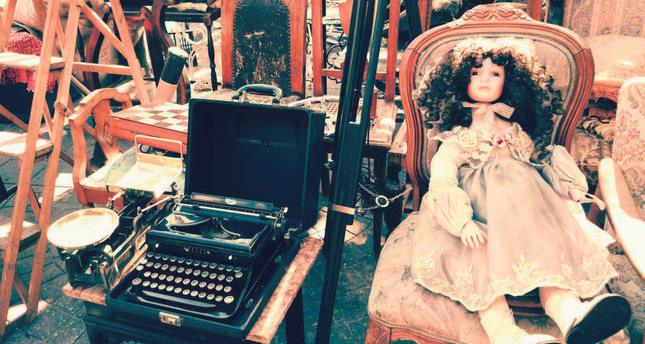 One man's trash is another man's treasure and the flea market is the perfect place to find both. Apart from the endless treasure one can find, the age old flea market has proven to be a lifeline for many communities

Browsing, exploring, rummaging, bargaining and buying - flea markets have been supplying the haves and have-nots of Istanbul for hundreds of years. But beyond the exotic, Eastern image of easy bargains for tourists, one leading economist has described how these unofficial institutions generate millions of lira every year, providing a real lifeline for Istanbul's low-income earners and vendors alike. These markets also fuel entrepreneurship and provide ways to revive small businesses, according to one expert. Usually an outdoor bazaar where vendors sell all kinds of second-hand items, these flea markets have also become a paradise for bargain hunters, collectors, hipsters and nostalgics. Kenan Seven, a veteran vendor from Kadiköy told AA: "The flea markets in Istanbul date back to old times. In the good old days, when something was broken it didn't go to waste, it was repaired and utilized instead." An old hand at the trade, Kenan has been working as a flea market dealer since the 1960s like his father before him. "I was born into this secondhand world, my family is one of the most experienced junk market dealers in Istanbul," he said proudly. You never know what you will find at a flea market from one week to the next, Kenan said: "It is a haven of trivia. You can find some mechanical things, like wrenches or hammers; some technological stuff like computers, CDs, mobile phones or a television remote; or stuffed animals, porcelain mugs, old comic books. But the best thing is that you always find something that belongs to the past." He added: "Maybe a photograph of a happy couple that you never met and probably never will because they are dead. Maybe some documents such as a sales contract or a marriage certificate. Flea markets are the place between today and yesterday."

Istanbul is home to many iconic markets in less-than-glamorous locations. The Dolapdere market is one such bazaar located behind a petrol station and an offal restaurant; the Feriköy market offers the city's most original old furniture and antiques - both are among the metropolis' most famous markets. As a trend, both Dolapdere and Feriköy open at around 6:00 a.m. on Sundays, and shopping generally continues into the afternoon. Mert Bahtiyar, a 26-year-old university student from Istanbul, is just one of those addicted to searching through the city's flea markets. He has been a loyal customer of the flea markets in Feriköy and Dolapdere for many years, Mert said: "I and my father always looked forward to Sundays. He used to wake me up in the early hours of Sunday, and we'd just set off with lots of coins in our pocket and with a long list in our mind." Mert said that flea markets have some distinctive rules both for the customers and vendors: "Seizing a place in flea markets early in the morning is certainly the best idea because the most unique and precious finds are sold by the afternoon." Each flea market, no matter how simple or small, has treasure potential in it, he added. Indicating that he could find many things, especially antique and quality goods in flea markets, he said: "You know the world market is full of Chinese-made products. It is getting harder to find quality on the cheap. There is no point hiding it. If we are strapped we want to save money on our goods, so flea markets are the best places to save money."

Besides the cultural richness, flea markets make an economic contribution. Minimumwage earners like African and Asian immigrants plus refugees or the homeless and unemployed both buy and sell in these markets to meet their needs. Economist Serhat Karamursel told AA that in order to save money, people have again started to see more value in shopping for discounted and second-hand products as opposed to luxury or brand-new items. Stating that flea markets have been worldwide businesses for hundreds of years, Karamursel said: "Small or large, it does not matter; flea markets contribute to the local economy in significant ways, maybe by millions of liras every year. Besides money saved, the flea markets also offer a way to revive a small business, reducing start-up costs and increasing entrepreneurship. Flea markets are good breeding grounds for those who want to go into business." Karamursel said that small businesses, such as artisans and craftsmen selling homemade or secondhand goods, have the advantage of being mobile in order to make a profit without the extra expenses of a commercial lease or taxes. "But there are some rules and regulations that must to be followed even by movable businesses like flea market vendors; they must pay taxes or else it will be evasion," Karamursel said. However, vendors react strongly against the tax issue. Cihan S., a 45-year-old vendor from the Feriköy flea market, said: "Flea markets are mostly cash businesses.

Many people wonder about how the sellers here are not paying taxes. But we are selling just to survive, not to get rich." Selling any old abandoned thing he can find from the streets or luxury neighborhoods in the city, Cihan said: "I think that makes the difference between making a little money and making a lot of money in this job. I am not stealing, just working round the clock to find something to sell." However, Cihan warned: "You should keep your eyes open. Be watchful of your wallets. As in any big city, crowded markets and bazaars are great places for purse snatchers, and flea markets are no exception." Despite the long debate on tax issues, the reliability of the markets' goods or how prices change from season to season or week to week, Istanbul's flea markets in 2014 seem to be the city's most vivacious shopping haunts - just as they were in centuries past.