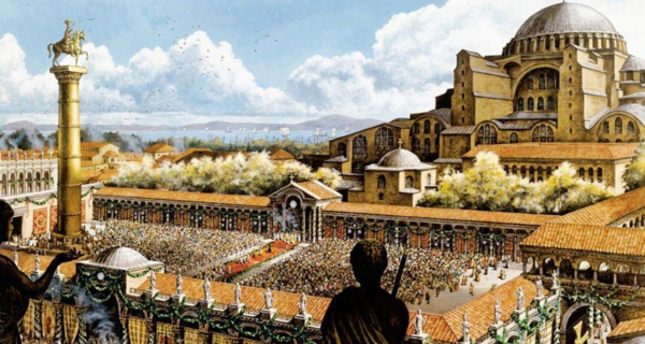 The conquest of Constantinople deserves more than just some reading about Ottoman statesmen and war accounts. On the contrary, the great Byzantine Empire, which was founded in the fourth century, should not be seen as an enemy behind the city walls

Upon the conquest of Constantinople, Ottoman Sultan Mehmed II was called "Kayser-i Rum" (The Caesar of the Romans) referring to the emperor of the Eastern Roman Empire, the ancient Roman Empire's eastern division, and the protector of Orthodox Christianity.

Indeed, the Eastern Roman people did not call themselves "Byzantines." It was Europe that coined the term to describe an eastern empire that does looked different to them. Indeed, there are a number of similarities between the Byzantines and Ottomans, the results of continuous interaction between the two groups.

The conquest of Constantinople is still fresh in the minds of conservatives who joyfully celebrate it. Yet, where is the distant history of a civilization that flourished in our land before it was even "ours?"

Last year, I gave a short course about the Byzantines at a private college. Before starting the lesson, I asked what they knew about them. All I saw was glazed eyes and blank minds. Many of us, long-done with our formal schooling, are in the same situation, however. Our historical knowledge of Byzantine culture solely includes heavy city walls, the Hagia Sophia and ruins such as the aqueducts. Regarding Constantinople's conquest, a significant part of this knowledge is synonymous with "absolute enemy." Let us examine to what extent the perception of Byzantium reveals about an ancient civilization dating back 1,200 years.

The land where we live today takes its roots from Byzantine culture. The empire has not existed for more than 560 years, and Europe does not consider itself as its successor. Furthermore, Turkish people do not know much about the Byzantines, which means that Istanbul is not the center for research on the Byzantine Era. There are only a few departments on this field at universities. The indifference toward this subject is resulted from broken-down ideologies. As mentioned above, the Byzantines were regarded as perfidious, a shabby and corrupt empire. It conjures images of a conquered city, laughter, palaces, feasts and deceptive women. Besides, the images depicting the siege of Istanbul in the Panorama 1453 History Museum is solely what we know about the conquest. In truth, the Turkish historical perspective is shaped only by a series of wars, among which we forget the defeats and always remember the victories.

Some of us think there would be nothing left behind if we do not remember the golden ages and the victories. Even the concept of remembering comes with its own ideology. We should remember those days in a way that they never remind us of our current deficiencies. We should remember Byzantines as an anonymous enemy behind the city walls and Turks as janissaries and the military mastermind Mehmed II and the subsequent sultans such as Sultan Süleyman the Magnificent. When it comes to the conquest, we only imagine a war atmosphere in Istanbul. There is no need to know more about the old Constantinople or Istanbul.

The colorless city, which is depicted in the oldest surviving map of Constantinople by Cristoforo Buondelmonti, was brought into life by Mehmed II who fell in love there. The Ottomans were the only successors of the Eastern Roman Empire. The Ottoman Empire borrowed many Roman practices related to the tax system, architecture, bureaucracy and administration, and harmonized them with their own world perspective. Today, we are embracing the Byzantine-era architecture. The heritage of Byzantine is our heritage.

The Ottoman civilization cannot improve by either despising the Byzantine Empire or telling the glorious story of Constantinople's siege. Talking about only military success and techniques is no longer worthwhile. The conquest of Constantinople deserves more than solely reading about Ottoman statesmen and war accounts. On the contrary, the great Byzantine Empire, which was founded in the fourth century, should not be seen as an enemy behind the city walls. Instead, let us remember the Byzantines from the eyes of its women.

The stories of Anna Komnena, who was Byzantine's only female historian and the abandoned church in Sultanahmet dedicated to St. Euphemia who was famous for strengthening Orthodox faith are waiting for us.