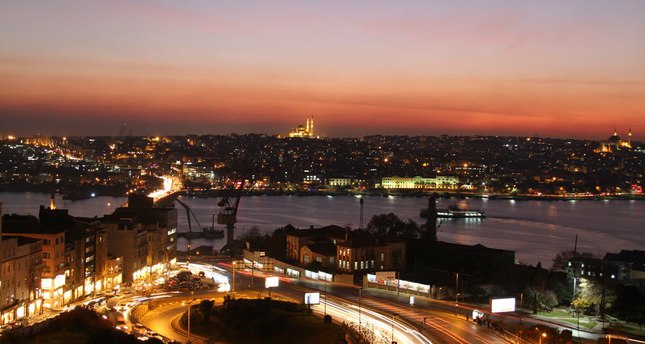 by Leyla Yvonne Ergil Oct 08, 2014 12:00 am
Never in a million years did I think that the traffic warnings surrounding the Kurban Bayram (Eid al-Adha; the Feast of Sacrifice) would apply to those going in the reverse direction, in other words, those like me driving into Istanbul for the holiday. Unlike the masses that evacuate the city, my partner and I were amongst those who had to drive into the city on Thursday, the night before the eve of the Feast of Sacrifice.

Setting out from our home in a village near Assos, we planned everything as best as we possibly could. Our timing coincided perfectly with the pleasant ferry boat that crosses between the Asian and European continents from Lapseki to Gallipoli, and the road was smooth past Tekirdağ. However, just as we were about to make our final pit stop to refill the tank and use the wayside facilities, traffic stopped to a complete halt with no route of escape. It was stop and go for at least an hour until we saw the first exit three lanes to our right. However, no one would give us space to move over toward the exit, with ambulances and even police suffering the same treatment. Fender benders began to happen and one by one cars ran out of gas, a fate we would also share in the form of a blinking red light on our gas gauge. Then there was the missed lavatory stop issue. I spent a considerable amount of time concocting inventions that would allow one to relieve oneself in the car. When we calculated our mileage upon entering Istanbul we literally had spent over five hours going five kilometers an hour doubling the six-hour drive it should have been.

The city was buzzing on Friday with bayram preparations and as a result traffic had not improved. Unsurprisingly, the car got a flat tire so we had to drive on bare rims to the nearest gas station because finding anyway to pull over to actually change the tires seemed near impossible. In the thick of Istanbul there was no easy way out and our fellow Turkish drivers, famous for their unique "style" of driving, were relentless.

I have to say though, as someone who drives in Turkey frequently, "Turkish drivers" have gotten a bad rap and the negative moniker should be more like "Istanbul drivers," as they are the true representatives of the stereotype.

When I drive through Çanakkale I don't see many "Turkish drivers" that fit the cliché. People are patient, kind, observant and drive defensively. It makes me laugh to think of my Istanbullu friends who complain about the conditions of our country roads and who constantly ask me how I can be so comfortable in my rural setting and not miss the civilized cosmopolitan settlement that is Istanbul. In response I say that being trapped in a car in the city for hours on end is no way to spend a day, whereas driving along the lovely village roads has been one of my most favored, relaxing and peaceful experiences, made better by the fact I live in this beautiful part of the country.

On Saturday the city was quiet, except for the voices of people wishing one another bayram greetings as they wandered in and out of buildings to pay visits to family members and friends. This was of course our whole reason for being in the city – to visit my father. Unfortunately, however, he fell ill and we found ourselves taking him for an emergency visit to a hospital in Haydarpaşa. Once again we faced deadlock traffic, but this time because of the throng of families visiting their deceased loved ones in cemeteries. Mayhem ensued as we navigated through the cars parked on the side of the road by those paying their respects to their dearly departed. No one is forgotten during the holiday, including the deceased.

Funnily enough, this holiday proved to be the best time to find hospital treatment. Although the specialist staff is limited, the number of patients is far less and therefore it is easier to receive good service from on call doctors. The chief physician of the hospital was even on hand and paid frequent bayram visits to each room. There was also a festive atmosphere in the halls as cheerful, loving families gathered to visit their fellow patients. But this wasn't the case for us. Like myself, my father, who spent most of his life teaching in the U.S., also doesn't have any other close family members here. I couldn't help but long for family and friends to be around us during this special time.

But that is all part of being an expat, in a sense you sort of sacrifice the holiday experience. The holidays we celebrated growing up, in my case Christmas, Halloween and even Thanksgiving are just ordinary days here in Turkey. When it comes to the holidays here, well we just don't have that extended familial support that would do a bayram justice.

In my case, I may not be able to roll out my own baklava like the Turks, but I will do my best to make this holiday a time of sharing love with family for my father.