My bee, my honey, my hive 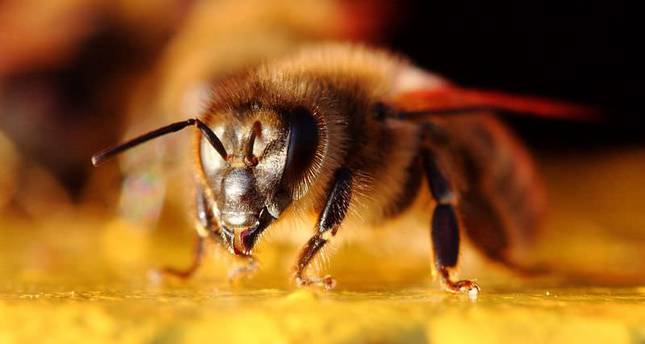 Turkey is second following China in the production of the world’s honey supply. A new reseach station in Ordu aims to produce various products from bees such as bee milk, raw wax and basic hive units

The governor of Ordu, İrfan Balkanlıoğlu, visited the Directorate of the Ordu Beekeeping Research Station's exhibition area to view various types of hives that are still used throughout Turkey. He was informed about hive types and traps that are used in pollen collecting by Feyzullah Konak, the manager of the research station. Konak said that Turkey claims second place in world honey production following China and that Ordu's honey production outruns the production of 109 countries. He said that 30 tons of pollen were produced with pollen collecting traps handed out by the Special Provincial Administration last year, and honey producers earn extra income through this practice.

The Ordu Beekeeping Research Station currently employs 27 technical personnel, 14 officers and 30 workers. The laboratories in the research station undertake every study related to beekeeping and bee products from developing cures for bee diseases such as varroa, nosema, acarine (tracheal) mites and tropilaelaps to producing artificial seeds for queen bees. Moreover, they conduct all analyses regulated by the Turkish Food Codex Honey Notice.

Between 2004 and 2014, the research station began 32 projects in total, 16 of which have been finished, while the other 16 are still continuing. Konak said that the project Arım, Balım, Peteğim (My Bee, My Honey, My Hive), which is supported by the EU's funding mechanism Instrument for Pre-Accession Assistance (IPA), is one of the most important projects of the research station. The project has a budget of 10 million euros ($12.6 million, TL 28.8 million), and the practices related to it have already begun.

The project, which is a first in Turkey, involves the honey producers of Ordu, Giresun, Samsun, Sinop, Trabzon and Rize. Konak said the honey produced in these provinces will be processed and bee products such as bee milk, pollen and propolis will be produced in the laboratories and the facilities that are being built as part of the project. Moreover, these laboratories will conduct the necessary analyses of honey and other bee products.

The facilities that are currently under construction will feature accredited laboratories, honey packing (comb, centrifugal, cream honey, etc.), pollen cleaning and propolis processing facilities along with marketing research and development, bee milk, raw wax and basic hive units. When the project is finished, 81 people will be employed, and the producers will begin branding in the bee and honey industry. As a part of the project, an international bee products processing center will be opened, and the Turkish bee industry will be able to offer a variety of bee products. Furthermore, the project will enable the training of qualified personnel and create a scientific environment for new developments. The number of small and medium-sized enterprises in the industry will be increased to 150 from 73.

The Directorate of the Ordu Beekeeping Research Station has been educating 2,361 trainees both in Turkey and abroad. Konak said that with contributions from the Turkish Cooperation and Coordination Agency (TİKA), the research station gave vocational education courses to those who practice beekeeping in Georgia, Cameroon, Uzbekistan and Sudan along with Turkish beekeepers' associations and ministry personnel.

Governor Balkanlıoğlu pointed out that the Ordu Beekeeping Research Station is the sole establishment regarding the study of beekeeping in Turkey and noted that its scope of authority will expand with the EU project. "Honey is the only product that comes to people's minds when they think of bees," Balkanlıoğlu said. "However, there are several curative bee products such as bee milk, pollen and propolis. Most of these products are unknown to people." He said facilities would be built to process these products within the EU project. "Turkey will have effective new facilities next year," Balkanlıoğlu explained. He underlined that Ordu stands out in bee production from other provinces in Turkey. "Ordu is one of the leading provinces in the beekeeping and honey industry," he added. He said there are a lot of settled and traveling farmers in Ordu who practice beekeeping. "In fact, Turkey is not using even 1 percent of its potential when it comes to beekeeping," Balkanlıoğlu claimed. He concluded that if people receive professional education, Turkey might generate 100 times more income from beekeeping. Following the briefing, he visited the facilities that are under construction and beehives that are installed in a flatbed trailer for mobile beekeeping as a part of the EU project.