Turkish football: a language of its own 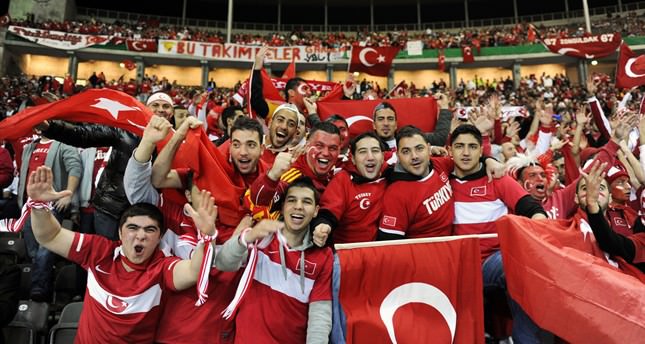 by Leyla Yvonne Ergil Oct 15, 2014 12:00 am
When I first made the move to Turkey 10 years ago, my father gave me a very intriguing present he said would be my key to learning about Turkish culture. I opened the gift up only to find that he had given me a season card to attend all Beşiktaş games played at the former İnönü Stadium. Even though my father happens to be a Fenerbahçe fan as a born and bred Kadıköylu, like many fellow expats I had settled into Cihangir. He said that witnessing a Beşiktaş game at the İnönü Stadium would be the ultimate introduction to Turkish spirit, and he was right.

I remember being terrified to attend my first game. The loud crowds and intense support was unlike anything I had ever experienced in witnessing a sporting event. But this was much, much more. In addition to actually following the game on the field, being a spectator at a Beşiktaş match involves a rigorous routine of cheers and Mexican waves. It was an adrenaline rush like no other and a feeling of team pride that I had never experienced before, and I used to watch the Lakers and Celtics play in my hometown of Los Angeles growing up.

But this was a whole other ball game, literally and metaphorically. Even though my season card had specified seats, I never sat in them once throughout the whole season. Because in the open tribune of the former İnönü Stadium no one actually ever sat. But not only did spectators stand during the entire game, they actually stood on top of the seats, to maintain balance, one foot was placed on one seat and the other on the other, so we were actually sharing standing space on seats with those on other sides. A tricky feat considering the continuous cheering and jumping demanded upon by the Beşiktaş spectator, all while trying to dodge the lit ends of cigarettes surrounding you.

When the home team scored, mayhem would ensue and everyone would jump on one another, similar to a mosh pit to engage in big group hugs. Miraculously though I was always left untouched.

In fact, I was the only one left standing around me. Initially I fell back on the paranoia that maybe they could tell I was a foreigner and that's why they didn't celebrate with me. But soon I realized that it was because I was a woman that I wasn't being rustled into the heaving hugs. When I walked through the stands to go to the restroom, it was as if the sea was parting ways as fellow fans yelled to one another that a woman was passing through. The male fans would be on their best behavior; they shielded me from crowds and passed me sunflower seeds to chomp on during the game and warm coffee to sip during the breaks. I always felt protected, due to the strong sense of morality, camaraderie and passion surrounding the national game of football in Turkey. Furthermore, the cheering and hours of jumping up and down was like a weekly therapy session and that year we beat Liverpool, Sevilla and Porto at home.

A decade later, I had the opportunity to go to a football game while in Istanbul caring for my ailing father and this time at the impressive Şükrü Saracoğlu Stadium to watch Turkey's national team host the Czech Republic in the Euro 2016 qualifiers. It was in remembrance of his thoughtful gift all those years ago that I felt it would be in his spirit that I would go watch Turkey's start to their next European campaign.

There was a festival-like atmosphere on the streets with over half of the spectators consisting of families and children. The stands were a sea of Turkey's red-crescent-and-star flags and the stadium itself was shiny and impressive, giving a clue of what the new İnönü Stadium might be like. This time, everyone took their seats and it was very much a family-like atmosphere and much more low-key than a league game. Many times I was the only one left cheering and embarrassingly I would stop when I heard only my voice rooting. Thank goodness, the days of smoking in stadiums are also now behind us, as it was an entirely civilized affair.

When Turkey scored the first goal, the crowds went wild. When Beşiktas defender Tomas Sivok scored for the Czech Republic, out of respect for his Turkish fans he kept the celebrations low-key. Then after the game, despite the 2-1 loss, the crowd gave a standing ovation to the Czech Republic squad in an ultimate feel-good moment that made me proud to be a wannabe Turk. But I guess you can't win 'em all.