Ancient Side beckons on Turkey's Mediterranean 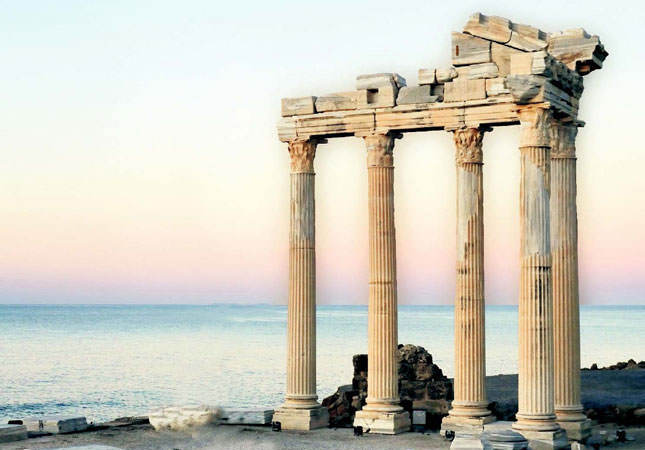 by Oct 20, 2014 12:00 am
After thousands of years of settlement by newcomers ranging from the ancient Greeks, Romans and Persians to pirates, Arabs and Jews, the town of Side on the Turkish Mediterranean coast is used to visitors. Side (pronounced "see day") is on Turkey's southeast coast, around 70 km (40 miles) from the city of Antalya, a popular, developed tourist resort. A peninsula just 1 km long and 400 m (yards) wide, Side is one of the most famous classical sites in Turkey. It is believed to have been founded by Greek settlers in the 7th century BC and its harbor and geography made it an attractive trade center for other occupiers, including Alexander the Great, Sicilian pirates and the Romans. In the 7th century AD, Arabs raided and burned Side, beginning its slow decline. Then in 1895, Turkish Muslim refugees from Crete arrived and the revival began. Here are tips for getting the most out of the Side area from Reuters, whose 2,600 journalists in all parts of the world offer visitors the best local insights.

At the end of the road leading to the Old Town (Antik Side), an amphitheatre on the left was built in the Roman style because Side didn't have a suitable hillside which could be hollowed out in the more usual Greek way. Not as well-preserved as the one in nearby Aspendos, it still can seat up to 20,000 people and hosts jazz festivals, opera, and classical concerts during the summer months. Towards the Hellenistic main gate to the ancient city, you can stroll through the ruins of homes or shops, some of which still have their original mosaic floors. Through the gate of the ancient city you come to a street flanked by colonnades. The remains of a Roman bath are here now a museum displaying Roman statues. At the eastern edge of the peninsula, past the harbor to the left, stand the remains of the 2,000-year-old Temple of Apollo, at their most majestic at sunset. The Turkish government has been restoring the temple's columns, which saltwater has been eroding.

The best way to explore Side is on foot. Its back streets hide small mosques, boutique hotels, quirky cottages and olive gardens. At Side harbor you can get boat trips to Antalya, Manavgat or go on the trail of dolphins, which, if you are lucky, can be spotted off the peninsula. On land, minibuses called dolmus are a frequent, cheap and often entertaining way to get around - if you are prepared to squeeze in. Taxis are available but set the price of your journey before climbing aboard.

Side has long, hot summers and short, mild winters. In the peak season - July and August - temperatures can reach 40 degrees C (104 F) or higher. Spring and autumn are more comfortable times to visit, with temperatures in the 20s and 30s but maybe the odd thunderstorm and rain. Sun worshippers have plenty of choice with stretches of beach on both the east and west of the peninsula. The west side was regenerated around five years ago with a promenade lined with restaurants and five-star hotels. The sea here is shallower and therefore more popular with some tourists. The east side is less crowded and attracts more locals, especially on Sundays. Lined with beach bars, there is a more relaxed feel. The beach is wider, a bit rockier and the sea is slightly deeper, great for watersports and parasailing.

SHOP TILL YOU DROP

The center of Side is the place for leather goods, hand-woven rugs, pottery, designer handbags, jewelry, watches, and sportswear - but be prepared to haggle and explore the side streets for the best deals. Manavgat, a working town just north of Side, might not be as glamorous but has plentiful and cheap markets twice a week, as well as plenty of sportswear and clothes shops. This is the place to experience the juiciest strawberries, cherries, melons and figs - at pleasingly low prices.

For cheap snacks sample fresh corn cobs, or try a durum, a wrap filled with typical doner kebab ingredients. For a few Turkish lira you can pick up the Turkish version of a pizza, called lahmacun - an oval, thin dough topped with minced meat, herbs and tomatoes. Opposite the Roman Baths in the Old Town, the family-run Ocakbasi restaurant offers good value Turkish food in a beautiful garden surrounded by ruins. Savor the generous portions of complimentary mezze. For food with a more elegant twist and for excellent views of the sea, try Aphrodite at the harbor, or Karma directly behind it.