Loss of culture through destruction 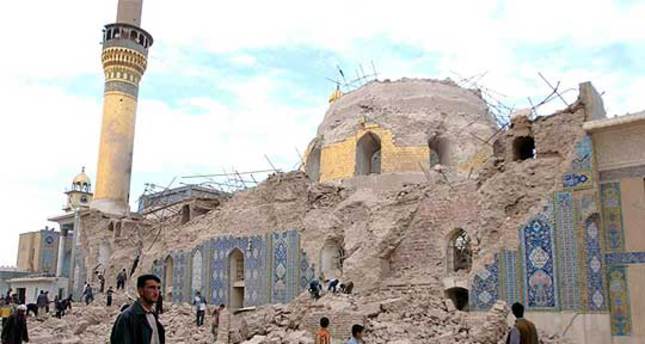 by Gülşah Dark Oct 22, 2014 12:00 am
One day you wake up in a world exposed to dramatic devastation. Ornate courtyards, historic marketplaces and other timeworn buildings that hide the secrets of a thousand years prior are nothing but empty ruins now. These are not the first words of a melancholic book, but the unfortunate reality for many.

Over the past several months, we find ourselves at the heart of breaking news stories and analyses about the relentless advance of the Islamic State of Syria and al-Sham (ISIS) where the U.S. and other countries continue aerial bombardments to eradicate the militant group. The world is watching a human catastrophe in which almost 24,000 Iraqi civilians have been killed or injured during the past eight months, according to recent U.N. findings. Aside from the tragic death toll, there is another horror that deserves to be treated in much detail as well: The destruction of cultural property in the Middle East.

The systematic violence by the harsh ISIS has led to the endemic devastation of mosques, churches, synagogues, tombs, shrines and other cultural and sacred relics at an unprecedented rate in the region graced with thousands of historic sites. The remains of Syria's ancient culture are gravely threatened by the extremist group that uses some of the archeological sites as hubs to execute civilians. The U.S. Bureau of International Information Programs (IIP) reported last month that "more than 90 percent of Syria's cultural sites are inside areas of conflict and displacement." During the three-year military conflict, the country's ancient treasures on UNESCO's World Heritage List have been reduced to nothing more than a pile of rubble. Another earlier IIP report says the Jobar Synagogue in Damascus, one of the world's earliest synagogues, was flattened, and the Greco-Roman settlement, Palmyra, was also on the brink of destruction. Last year, the Great Mosque of Aleppo, formerly a Byzantine church, was extensively damaged during the heavy fighting between the Free Syrian Army (FSA) and Assad's pro-government forces in the old city of Aleppo, which was the home of Hittite, Hellenistic, Roman, Ayyubid, Seljuk and Ottoman civilizations. Many other Sunni, Sufi and Christian remains were bombed and looted as well.

Presumably, many of you are well aware of the importance of safeguarding cultural heritage, which is widely discussed in history classes, conferences and through both mass media and social media. Theoretically speaking, culture is what gives you a sense of belonging. It might therefore be claimed that the systematic destruction of collective knowledge or alternatively, cultural terrorism, is an easy way to erase a nation as if it has never existed before. Take this story as a relevant anecdote; I lived in England for a year once, and I visited the British Museum with a Buddhist friend. There, she learned more about Islam while I also had chance to learn about her own religious practices, using artifacts we saw in the museum as conversation starters. Such a small but thought provoking experience might establish why both civilians and cultural icons are the victims of mass killings, such as the Assyrian city of Nimrod that was seized in June whose history dates back 5,000 years, and a museum in Mosul, which is now an execution site, according to a Bloomberg News report. "More than 4,000 archaeological sites in areas the group controls in Iraq are at risk," the report said.

Amid the unforgiving war, the Metropolitan Museum of Art in New York voiced concerns and frustrations toward the cultural damage to the Middle East last month at an event "Heritage in Peril: Iraq and Syria." UNESCO Director General Irina Bokova called to end the cultural cleansing in the region, while underscoring the efforts to preserve Syrian and Iraqi heritage. Aside from UNESCO, the Syrian Heritage Initiative publishes online weekly reports about the current situation in the country. Researchers at the American Association for the Advancement of Science also conducted a geospatial technologies and human rights project that introduces a comprehensive assessment of the situation of Syria's world heritage sites using high-resolution satellite images.

Indeed, it is not necessary to travel far to elaborate these examples because the destruction of cultural property is regrettably visible within the borders of Turkey. Diyarbakır's Ziya Gökalp Museum was reportedly set on fire and books were stolen during the protest against the invasion of Kobani, a key town on the Turkish-Syrian border, by ISIS. The museum is the house of the late Turkish author and sociologist, Ziya Gökalp, and was turned into museum in 1956. Another similar story came from Siirt, where demonstrators damaged the public cultural center and library.

It is beyond the scope of this article to discuss this issue from a political perspective, and the abovementioned examples can be gathered under three main categories of cultural terrorism, as described by Stone and Bajjaly (2008), which are the targeted destruction of cultural heritage to gain political advantage, collateral damage where the cultural heritage is destroyed as an innocent bystander and the destruction caused by the trade in illicit antiquities.