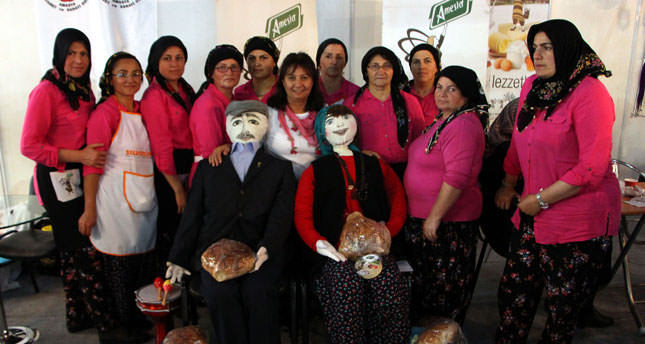 by AA Oct 29, 2014 12:00 am
The group's leader Bingül Alış, a retired handicraft teacher, told Anadolu Agency at the fifth Local Products Fair (YÖREX) that the group started when she was searching for creative hobbies to occupy her leisure time after retirement and came up with the idea of assembling local women in the district. After visiting the district governorship, Alış took her first steps in creating her new team of worker bees. She observed that "kıvratma" – a traditional hand-woven pattern unique to the district of Merzifon – had sunken into oblivion and was in need of resurrection. "There are very talented local women experienced in point lace. When I met with the governor in 2011, we decided to carry out an EU-funded project to introduce our traditional products to the market," she continued. The district governorship conducted the necessary procedures to turn the local products into something of economic value. The EU project titled "A Brand Journey with Economically-Independent Women in the Agricultural Sector" promotes female employment in rural areas. Rural women need more support because they "live their lives under difficult conditions, are away from urban life and toil in the field," said Alış.

The Hardworking Female Bees consists of 15 leading women from Merzifon's villages. They were elected from the wives of the members of the Amasya Breeding Cattle Growers. Each woman formed their own team in their village. "We do not only want to milk cows, but to make profit from our traditional food and handicrafts," she added. The group members help their family budget by introducing different products such as home-made food to traditional embroideries exclusively made for their daughters' dowry. When M. Rifat Hisarcıklıoğlu, the President of the Union of Chambers and Commodity Exchanges of Turkey (TOBB) visited the district, he said that the "local products do not only belong to its region, but the whole world." Hisarcıklıoğlu told the women that they had enough power to achieve their dream. "We believe in our mission. It might sound like a dream, but we will continue to work to become a world label," Alış reiterated.

Amesia currently offers more than 40 products including almond from Karacakaya, mint from Sarıköy, cheddar, traditional hand-woven handicrafts and molasses made of mulberry, apple and red beet. "Our group members do not watch TV series, they instead work continuously. I tell them to forget watching TV, it is time for production," Alış said.

Volunteerism is the key factor in increasing production in the group. The 15 village leaders meet every Monday to set their agenda. Like bees, each of them has their own task. Humorously, each woman is described with a different nickname. "We have a lifeguard bee, who goes around and solves problems. There is a plane tree bee, who is the oldest member in the team. We always ask her advice before making a decision," she said. There are two other women with driving licenses and they distribute the products to shops every week. Three other women wake up at 5:00 a.m. every morning and get bread ready by 8:00 a.m.

Hülya Çalışkan, who is described as "lifeguard bee," said, "I am a rural women and I only have a primary education. You probably know female villagers; they are always belittled and are perceived as having fallen behind. When I took up this job, I gained self-confidence. My family began to pay attention to the things I said. They show respect," she expressed. Medine Alkoç, the group's "accountant bee," said that local women want to participate in our group and we are looking for hardworking and honest members.