The oldest dessert in the world: Ashura 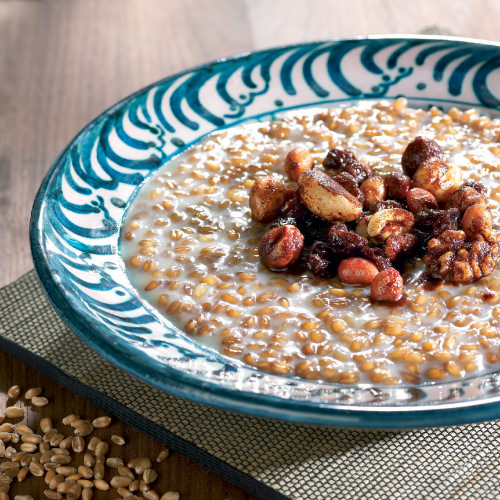 by İzlem Arsiya Nov 03, 2014 12:00 am
You might be hearing the word Ashura a lot these days, a delicious pudding with almost everything in it. Well, take this time to become acquainted with this mouth-watering dessert and the history behind it.

Ashura (pronounced ashure), otherwise known as Noah's pudding, is a Turkish dessert of Armenian origin with a unique story. Known as the oldest dessert in the world, Turkish legend has it that it was actually Noah who made this pudding first - hence the name. The legend tells that food supplies started diminishing after many long days on the arc, so the little bits of what was left over were put into a pot and cooked together. The outcome was a pudding that has traveled through the ages known by many cooking in modern Turkish kitchens.

This pudding is more than just a flavorsome dessert; it is also great for the immune system, especially during the winter months. Because it is made from wheat, this pudding is rich in carbohydrates and calories that keep you warm and give you the energy you need to stay active and healthy. The nuts in Ashura also provide your body with iron, calcium, vitamin E and vitamin B, making it a favorite for the winter.

In Turkey, Ashura is made in the month of Muharram, the first month of the Islamic calendar - known as the Month of Ashura in Turkey - which started on Oct. 25. There is also the Day of Ashura, which is celebrated on the 10th day of the month of Muharram, when Noah came to rest on Mount Arafat in historic Armenia - now modernday Turkey. Aside from Noah's landing, this day was also of great importance for other religious reasons. On the tenth day of Muharram, Prophet Abraham was saved from the fire that he was catapulted into by Nimrod; Prophet Idris was also taken to heaven on the day; Prophet Adam's remorse was accepted; Prophet Moses and his people were spared from the Red Sea and Prophet Job's health reruned. For Shia Muslims, the tenth day of Muharram is the day they memorialize the agony of Hussein, the son of Ali and Fatima - the grandson of the prophet Mohammed.

For Muslim's everywhere, the Day of Ashura is a reminder of the sacrifices prophets made for humanity and as such it has become a day to commemorate them.

Noah's pudding does not have one specific recipe, there are hundreds of different variations of the same recipe, give or take a few ingredients. This nutritious and delicious pudding is made with whatever you have available. The main ingredients are whole grain, wheat or barley, apricots, raisins, currants, figs, pine nuts, walnuts, hazelnuts, chickpeas and navy beans. The recipe gives you room to play around with the ingredients according to your taste. The original pudding was made with rose water to give it flavor but substituting the rose water for lemon or orange is up to the cook. Ashura is made in large amounts when it is cooked so that it may be shared with friends, family, neighbors, classmates and co-workers. Ashura is given out as a gesture of peace and friendship and is prepared in Muslim homes with special prayers for health, happiness, peace, wealth and success. It is customary in Turkish homes that bowls of this delicious pudding be handed out to as many people as possible believing that the pudding with bring "bereket" (blessings and abundance).