One Hundred Years of Love: A century of Turkish film 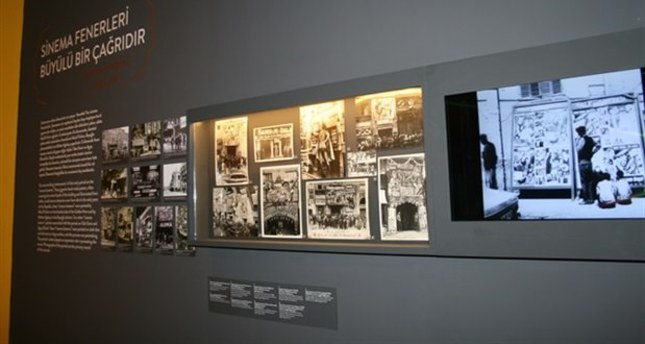 In celebration of the centennial anniversary of Turkish film and the tenth anniversary of its opening, Istanbul Modern is holding a very special exhibition entitled ‘One Hundred Years of Love,’ which documents the connection between film and audience in Turkey over the past 100 years

The "One Hundred Years of Love" exhibition, which runs from Sept. 25 to Jan. 4, contains images of Turkey's first movie houses and scenes from nearly 50 Turkish films. There is also a wide variety of movie memorabilia, including programs, flyers and posters. There is also a comprehensive catalogue on offer, with articles focusing on the relationship between film and audience, along with various archival visual material.

Yeşilçam (Green Pine) is a metonym for the Turkish film industry, much like Hollywood is in the United States. Named after a street in Istanbul's Beyoğlu district, where many actors, directors and studios were then based, Yeşilçam experienced its glory days from the 1950's-70's, when nearly 300 films were being made each year. After the 1970's, Turkey's film industry suffered due to the spread of television and faced with massive budget limitations, began producing hilarious rip-offs of Hollywood blockbusters. Coined by the term, Turksploitation, which Wikipedia describes as "a tongue-in-cheek label given to a great number of unauthorized Turkish film adaptations of best-selling Hollywood movies and television series, produced mainly in the 1970s and 1980s," Turkey's filmmakers at the time did not refrain from utilizing footage, music and sound effects from the films they so coveted.

These films are like entering a bizarre parallel universe in which so much is familiar, yet at the same time so wildly different. Think "Betman" instead of Batman or a Turkish Superman called Tayfun, whose adventures take place in rural Turkey. There is also the film "Three Supermen at the Olympics." Perhaps the most bizarre is "Iron Fist: The Giants Are Coming", in which the hero walks around with a Phantom mask on his face, a Superman emblem on his chest, and a Batman logo on his belt. The character he's fighting is the familiar Fu Manchu, however in this version, he's a wheelchair-bound transvestite.

The "originals" ripped off range from "Dracula in Istanbul", Wizard of Oz in a film entitled "Little Ayşe and the Magic Dwarves in the Land of Dreams". "Golden Boy" is the Turkish version of James Bond and was followed by two sequels. There are not one, but two, Turkish E.T.'s, "Badi" and "Homoti", the latter colloquially known "Turkish E.T. 2", however the film was not a sequel.

There was a scene-by-scene remake of The Exorcist, called "Satan", "Black Lightning" is based on Rocky and there was a whole a series devoted to Rambo, including "Ramo", "Wild Blood" and "Rampage", the latter of which was recently released in English by a US production company. These films are fast reaching cult status as thanks to the world wide web, there is now a growing fan-base for this genre, now dubbed remakesploitation movies.

The popular Texas theater chain the Alamo Drafthouse used to hold showings of Turkish Captain America and Santo vs. Spider-Man and Turkish Star Trek with live commentary. In "Three Big Men", Istanbul police call in Captain America and Mexican luchador Santo to put an end to a sadistic Spider-Man's latest crime spree. "Ömer the tourist in Star Trek", dubbed the Turkish Star Trek, re-imagines three episodes of the original series while adding a subplot about a time-traveling comedian. Mr. Spock is Mr. Spak, in what was actually the first full-length Trek movie ever produced in the world.

Last, but certainly not least, is the film considered to be the Turkish Star Wars, entitled "The Man Who Saved the World", which not only includes footage from Star Wars itself as well as music from Flash Gordon, Planet of the Apes and Indiana Jones. There was also a sequel, named 'Turks in Space" or "Son of the Man Who Saves the World", and both the protagonists kung-Fu their way through Cappadocia, fighting the likes of blue-headed robots, giant red-bears, skeletons and zombies.

A new documentary by Turkish director Cem Kaya, entitled "Remake Remix Rip-Off" (Motör), debuted on August 13 at the Locarno Film Festival. It squeezes in seven years of research on Yesilcam cinema, into a full feature that includes many of the aforementioned films as well as a five-minute montage of all of the Turkish film scenes that have been ripped off by Wuthering Heights. Catch this unique insight into the Turkish film industry at the 20th Festival on Wheels (Gezici Film Festival), which kicks off on November 28 in Ankara and runs until Dec.4, then heads to Eskisehir from Dec. 3-7 and closes in Sinop on Dec. 5-8.