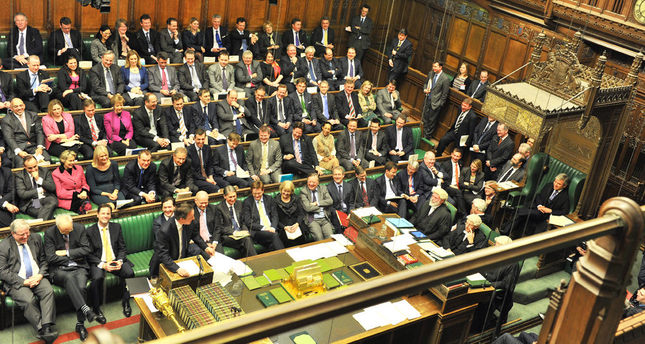 Adam McConnel claimed recently that the problem with the Turkish press was not a lack of freedom, but a lack of objectivity. He is right. But then again, the same could be said about the press in a number of nations

That is to say, no media source will give you both sides of the issue. Then how do we understand the truth behind the news? Even buying every single different paper won't help. How can we try to understand what the truth is? Everyone has an axe to grind. The other day I was given a copy of Hansard, and suddenly it all became clear.

Not many people outside of Britain read or even know what Hansard is. Probably not that many people in Britain read it. Hansard is the transcripts of parliamentary debates in Britain from the House of Commons and House of Lords. I was privileged enough to be given a copy by the Lord Sheikh last week. He wanted me to read what he had said about Turkey in a debate, which had taken place on Oct. 30, 2014, on the Middle East and North Africa. The debate was considered important enough to be given a time slot of five hours and had been proposed by the Lord Risby.

I read the Lord Sheikh's speech. I read it three times. Then I looked at the first speech, that by the Lord Risby. I was hooked. I read every speech from the five-hour session. I had known these debates had occurred, but they are usually accompanied by images of people who seem to be sleeping. But what was in my hands was interesting rhetoric and well-informed debate. The 1999 reform of the House of Lords has clearly worked. But don't take my word for it; let's let the Lords speak for themselves.

The Lord Risby: "… Turkey did not want to get involved [in fighting in Kobani] because it believed that …[the Kurds] …were fighting under a banner of a terrorist organisation. But the Turks have spent $4.5 billion in feeding and housing the enormous influx of people who have come into Turkey. What they greatly fear … is terrorist activity in Turkey itself. … It has called for a security zone and a no-fly zone, not only to protect themselves, but to stop the potential huge flow of additional people coming into the country."

The Lord Desai (talking about extremists): "… many of our young people have gone to Syria or Iraq to fight for ISIL [the Islamic State of Iraq and al-Sham, or ISIS]. I think we should not call the extremists and we should not threaten them with … arrest … if they come back. These are our children. Some of our other children take to alcohol, take to drugs. … we feel we ought to do something positive to get them out of their … problems. Now some young people … have taken to believing in extremism. … It is very attractive to believe that you have a higher cause than your daily living in a rich consumer-oriented society. … It is up to us to understand why they have gone there. … We ought to welcome them [back]."

The Lord Balfe: "There are many misconceptions. First, there seems to be a misconception that the problems between the Kurds and the Turks are of recent origin; they go back at least to Ataturk. Indeed the present Government in Turkey have initiated discussions with the Kurdish population that have gone some way to at least solving some of the outstanding problems. We must remember that the PKK is still listed as a terrorist organisation by the US, the European Union and NATO, as well as by Turkey itself. That therefore adds considerable problems to how Turkey deals with a number of the problems on its border.

"Let us be clear: the Turkish Government have spent some $4 billion dollars on aid. … They have allowed 200,000 citizens of the Kobani region to come into Turkey to live. … They have, in other words, done extremely well with the cards that they have got."

"… the noble Lords … mentioned very properly the role that Turkey has played and can play. We are very grateful to Turkey for its humanitarian effort. … Clearly, it is a crucial partner … I know that Turkey has difficulties with the Kurdish region because of the PPK issue but it is working as hard as it can … in the degrading and defeat of [ISIS]."

The Lord Sheikh: "There are clear rules of engagement in Islam relating to warfare, which were laid down by Prophet Muhammad, peace be upon him, and Caliph Abu Bakr.

"These rules include the following: give diplomacy a chance before battle starts; respect treaties; do not harm women, children, the elderly and religious persons; do not destroy crops and trees; protect all places of worship; treat well all prisoners of war; and allow the bodies of soldiers slain in battle to be buried in dignity. These rules of engagement were laid down well before the Geneva Conventions.

"… the so-called jihadists are forcibly converting people to Islam. That is not allowed in Islam. It is written in the Holy Quran that there is no compulsion in religion.

"… we need to be careful who we supply the arms to. The situation is complex and the scenario is changing. The arms may fall into the hands of people who may create further problems in Syria, Iraq and friendly countries, such as Turkey."

Of course, as this is a debate, there are opposing views.

The Lord Mitchell: "… I am a Zionist. … Hamas is a vicious terrorist organisation, and is proscribed … by ourselves … the United States, the EU, Canada, Australia and many Middle Eastern countries. It thrives on terror and hatred. Its charter is quite clear: it seeks to destroy Israel …

"So when we see demonstrations in the streets of London which are pro-Hamas [I would like to add an editorial '?!' here] … it beggars belief …"

The Lord Palmer of Childs Hill: "What makes me despair is the absence of reporting in the media on the support that Israel has consistently given to the people of Gaza. Some formidable forces are lobbying against Israel in the British public arena [again, if I may, '?!']. It is perhaps the unrelenting campaigns of such formidable forces that drown out the truth about what Israel is doing to help Gaza …"

The Lord Weidenfeld "Now … Erdoğan, an authoritarian Islamist who all but dismantled the western and secular republic of Kemal Ataturk, at first denied his NATO allies air landing rights and land access, and refused to help the gallant Kurds defend Kobani against the ISIS hordes."

The Lord Weidenfeld was born in 1919. I pray that I will have the mental capacity at that age to take part in such a debate.

So here, in a few pages, the House of Lords reflects different perspectives on a number of issues. As the speeches follow one upon the other one feels as if one is taking part in the debate. The nice thing about a debate is the audience decides for themselves. Newspapers only give one side of the story. Much of what is said in the House of Lords never even gets reported in the press. But online, every day, we can follow debates published in Hansard. On the day that all those above speeches were given there were also debates on Boko Haram, the Iranian nuclear program, Afghanistan, refugees and migrants, slavery and football clubs. Oh, and I haven't even looked at the House of Commons Hansard. The reform of the House of Lords has created a supervisory structure that carries out reviews of laws; the debates are clearly a reflection of the wide range of opinion in the U.K. What a pity that, much as happens in reporting on Turkey, only one side's argument is reflected in the press. If you want to hear what normal everyday Brits think, go on line and follow Hansard.