Stari Most: A living memory of the Bosnian War 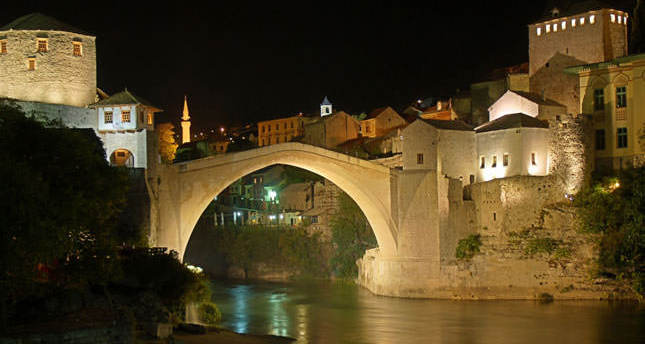 Bosnians held a ceremony to commemorate the 21st anniversary of the fall of Stari Most, a historic bridge erected by Ottoman architect Hayreddin, the student of Mimar Sinan. The bridge was rebuilt in 2004 in collaboration with UNESCO, the World Bank, IRCICA and TİKA

Croatian soldiers in the city of Mostar, Bosnia and Herzegovina, held a special ceremony to mark the 21st anniversary of the fall of "Stari Most" (The Old Bridge). Lilies, the symbol of the country, were thrown over the historic bridge built in 1566 into the Neretva River. As part of the commemoration ceremony, Adis Boskailo along with fellow divers of the Mostari Divers Club jumped to the river to commemorate the victims of the Bosnian war.

Sasa Orucevic, the club's spokesperson, said Nov. 9 is the most painful day in the history of Mostar. The locals show great interest in the ceremony at the bridge, which is seen as the city's historic symbol. Although it was hard to jump to the river on such cold days, the divers, who have been trained since their early ages, proudly do so. "They do not underscore the physical pain, but the emotional sorrow that Bosnians suffered here," Orucevic said. Diver Emir Balic said Bosnians treat the bridge as if it was a living creature or an elder person that should be respected. Unfortunately, however, it was destroyed because it helped facilitate the gathering and mobilization of people, Balic continued.

Speaking to Anadolu Agency, Edin Palata, one of the two locals that witnessed the destruction of the bridge, said many attacks targeted the bridge the day before the final attack on Nov. 8, 1993, which finally destroyed it. "I prepared my camera at home and recorded the attacks from the early hours of the morning," he said. Palata saw an artillery shell hit the left bottom of the bridge at 10:00 a.m. "When I remember those days, I get cold all over," he said. When he was recording the incident, he never thought that he would be one of the war victims. "I was watching the destruction with my black and white camera. Whenever I watch the recording, I'd try to think that the bridge had never been destroyed and nothing happened," Penta added.

Local journalist Zlatko Serdarevic said that the Stari Most was destroyed due to the attitude of the international community, which predicted the possible risk but were totally indifferent toward the issue. Serdarevic went on to say the situation is still the same, suggesting the international community is letting them down. "There is an invisible wall in Mostar similar to the Berlin Wall that divides the city into two parts," Serdarevic said, adding the pain he suffered after the bridge's fall was great. "Some of us cried on the debris of the bridge, while others remained silent and watched the incident, but none of us could believe our eyes," he expressed.

The Stari Most, which was erected by Ottoman architect Hayreddin, a student of Mimar Sinan, had always connected the two cultures for many years, and the city of Mostar was named after it. The bridge, which is 4 meters wide, 30 meters long and dominates the river at 24 meters high, connects the two parts of the city where Bosnians and Croatians lived. Many courageous young locals jumped over the historic bridge, and according to Bosnian tradition, in doing so, young men often proved their courage to their fiancées before their wedding day. However, on Nov. 9, 1993, the bridge fell victim to the relentless war in Bosnia. The old bridge was greatly damaged by Croatian artillery and sunk into the river at 10:16 a.m. The reconstruction of the bridge commenced in 1997 in collaboration with UNESCO, the World Bank, The Turkish Cooperation and Coordination Agency (TİKA) and the Research History for Islamic History, Art and Culture (IRCICA). Divers from the Hungarian army discovered and recovered the original stones of the bridge from the river. After the reconstruction was completed, the bridge opened on July 23, 2004 following a ceremony held that hosted Prince Charles and representatives from many countries including Turkey. The Stari Most was included in UNESCO World Heritage List in 2005.