Embrace Ottoman heritage in the Balkans 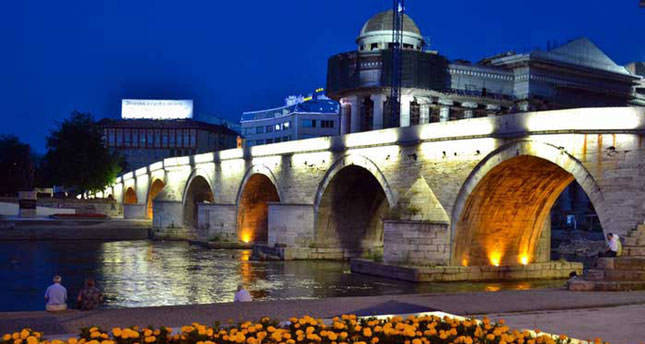 From the moment you arrive, cafes serving pastries, sandwiches and Turkish tea make you think, ‘We are Skopje, Skopje is us.’ We entered the country after going through passport control only to feel like we had arrived in a city in Turkey, not a foreign one

I travelled to Macedonia to visit the Macedonian city Struga, which continues to organize an annual poetry festival that has been running for 53 years despite the economic and political problems of the country. I used the festival as an excuse and headed for Skopje, the touchstone of our trip.

It seemed like our feet automatically took us to the places that we had already known. My friends and I began tracking down traces of the Ottoman Empire in the Balkans. A road led us to an old bazaar that was identical to the old bazaars in Urfa or Bursa in Turkey. The bazaar, starting from the castle to the Stone Bridge, is home to stove makers, whitesmiths, leather shops, jewelers, candy stores and shoe makers in their most natural state. It is pleasant to have a coffee in Kursumli Han, Kapan Han or Suli Han, which all contain Ottoman motifs. I truly realized that I was in Macedonia when I reached for a book and saw that it was in the Cyrillic alphabet. We continued to trek through the bazaar, which boasts magnificent floors laid by famous Albanian stone masons.

In regions with ancient heritage one can easily see how modern life damages historical cities like Skopje. The bond between future generations and history is broken and its identity is lost as cities undergo rapid transformations. In Skopje you could see numerous Ottoman buildings wedged between modern ones, but nevertheless, it is promising to see inns, public baths and mosques such as Mustafa Pasha, Sultan Murad and Ishak Bey still standing.

The city is divided by the Vardar River. I only talked about the one side that was inherited from the Ottomans, but now I am on the other side near Vardar at the base of Vodno Mountain. This side represents the Christian population of the city with a cross erected on the top of the mountain.

I began to wander around Nova Stari (the New City) in the evening hours. The main street that starts from the Stone Bridge to the train station is a very long one. The street was named after Sultan Reşad as he enjoyed walking on the street; however, its current name is Macedonia. This part of Skopje is a typical eastern European city with its Alexander the Great Square featuring the statues of Macedonian nationalists, Renaissance style building and a replica of the Arc de Triomphe in Paris. When I looked around on the Stone Bridge and compared the scenery with the postcards that I bought and realized that this bridge is the old Stone Bridge from the cards, yet the Ottoman inscription had been wiped out and a lot of water had flowed beneath the bridge.

Ibn Khaldun said "Geography is fate." This saying might explain the situations of nations that face unfavorable weather conditions and lack of natural sources. However, how can we explain the inequality in income distribution between Turkish and Macedonian nations living in two sides of a city that is divided by a river? It is easy to understand the intentions of the current nationalist Macedonian president, Gjorge Ivanov, who wants to erase the traces of Ottoman and Islamic culture and revive the old Macedonian civilization just by looking at the silhouette of Skopje. Moreover, one can understand that the owners of the city invest all their money for the prosperity of Macedonians. Almost all stadiums, hospitals, parks, universities, shopping malls and public buildings offer their services to the Macedonian side of the city. The other side is left to its own destiny. Muslim neighborhoods are threatened by unplanned urbanization.

Education is the only thing that can rule over poverty, yet unfortunately, the education rate among the Muslim population is very low. The high unemployment rate in the country affects the minority Muslim areas the most. The laws that require employment directly proportional to population are unrequited in practice. Young Muslims, men and women, are on the prowl for education in order to hold on to their hopes, or delay their despair. Turkish companies that invest in the city have to employ Macedonian workers as well as Muslims, however even though they do not offer too many job opportunities, Turkish companies remain a source of hope to the Muslim community of Skopje.

After compulsory education, Muslim parents choose one of their children to continue his or her education. The other children assume the duties of that child hoping one day he or she will take care of their family and relatives.

Since the fall of the Ottoman Empire, the biggest problem for Turks and Muslims in the Balkans is to exist while preserving their identities. The pain that was endured through the many wars still exists. Despite all the negative things in their lives, Muslims in Macedonia do not leave their homeland just as those in Bosnia, Albania and Kosovo have not. They turn to Turkey whenever they face something that they cannot handle. Skopje taught me how much this historical instinct is real and how hard is to answer this heavy responsibility.