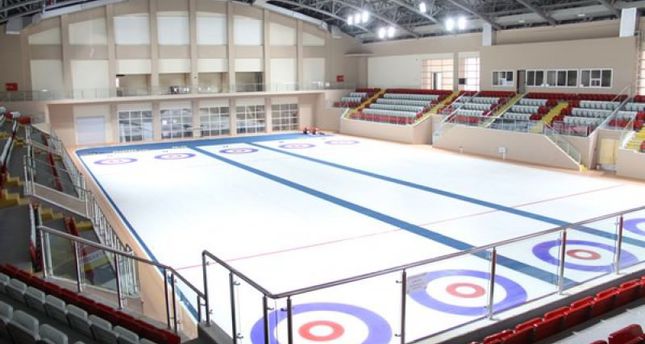 Contrary to its suitable conditions for winter sports, Turkey has not made sufficient progress developing them within the country. Yet there have been improvements to sporting infrastructure such as the establishment of the Ice Skating Federation with the focus on placing in the Youth Olympic Games curling competition

We have grown up with the names of football players and waited for Galatasaray and Fenerbahçe rivalry impatiently. We have heard the cries of fans celebrating the victory of their team in the streets whenever a football team has won an important game. Football has been so popular in Turkey that you can talk to almost everyone about football matches held abroad. At least, I have many friends asking millions of times which team I support in the Barcelona and Real Madrid derby.

Even though the popularity of football in Turkey cannot be compared to other sports, it is possible to say that basketball, volleyball and athletics are extremely popular and have their place within the sporting culture. However when it comes to winter sports, there are certain sport branches that some people haven't even heard of, let alone follow.

Curling is one of them. When I was younger, I encountered a curling game on TV and it immediately captured my attention. One player was sliding a stone on a sheet of ice and the other three players were sweeping the surface. Then the stone was slowing down towards the four concentric circles. As a child who thinks that sport only consists of football and basketball, I was surprised to see such a game. When I asked people around me about curling, the only reaction I received was a confused face. As time has passed, I have become a great fan of curling and followed many international games. While following them curiously, I realized that winter sports had not made any progress in Turkey; a country which has suitable conditions for winter sports. Fortunately, the 2011 Winter Universiade, which took place in Erzurum, has changed the situation somewhat. Even though Turkey has been a member of the World Curling Federation since 2009, it was the Erzurum Winter Universiade that made the real impact.

Utku Yalçın, a sports expert at the Turkish Ice Skating Federation, spoke to Daily Sabah about Turkish curling's past, present and future.

Stating that the federation has been working hard to improve curling, especially over the last five years, Yalçın said they have faced serious problems which have caused curling to fall behind in relation to other popular sports.

"Our federation has been carrying out a league for three years and all competitions are held in Erzurum Curling Arena with three or four competitions every month. We now have 10 teams of men and 10 teams of women playing in the major league. Even though Turkey has really suitable geographic conditions, curling has some serious problems such as inadequate facilities, familiarity, lack of materials, a general perception that curling is an expensive sport and educational obstacles."

Noting that the federation's first main challenge is the lack of curling arenas, Yalçın also said that they have had difficulty in meeting the financial requirements of curling and curling players sometimes cannot find a club to play for.

This year, within the framework of a project, the federation has come to an agreement with Canadian coach Daniel Rafael, who is one of the world's leading coaches of curling. Rafael has had many various successes in his career such as the world and Universiade championships during his coaching stints in China, the Czech Republic and Italy. "Rafael is an idealist coach," said Utku Yalçın. "He has refused the proposals of other countries and accepted to work with Turkey. We are now working on a project that is being carried out with the aim of getting the national team among the top 10 in the world, participating at Olympics and making curling a familiar sport in Turkey."

Rafael's actions promise hope, as well. Saying that the infrastructure in Erzurum and the quality of ice in Turkey were reasons why he took on the job of being the coach of the Turkish Curling Team. "We aim to improve curling by opening new curling arenas in Kocaeli, Ankara and other cities, and by making more people participate in it," said Rafael.

Stating that they believe that curling has a bright future in Turkey; Yalçın said that the primary focus of Turkish Ice Skating Federation in curling is to take part in the Youth Olympic Games. "The federation, they recommend that the curling should be trained in universities and military schools as the art and intelligence of prediction and strategy make more sense there," said Yalçın.

"Besides, it is important to encourage private entrepreneurs to make single sheet curling arenas which are worth $100,000. The last thing we recommend is that the sports clubs, which consider themselves as "big sports clubs," should be involved in this system in terms of facility and teams."

The situation is not only about curling; it is about the variety of sports that can be played in Turkey. We should place importance on the other sports and expand the variety. It is not difficult to see that the countries with a broader variety of sports are much more developed.