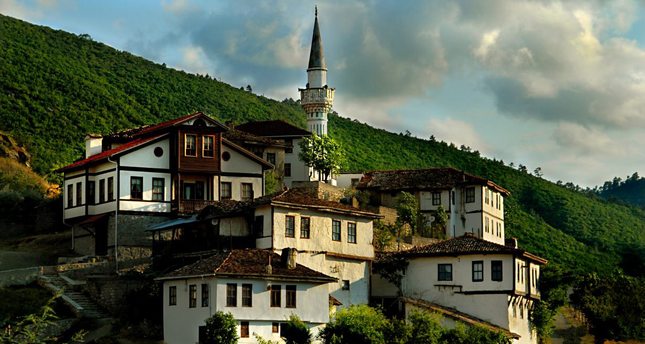 Located midway between Ankara and Istanbul in Sakarya province, Taraklı is a little district with breathtaking cobblestone streets and architecture dating back to the Ottoman Empire

This interesting town gets its name Taraklı (meaning "with a comb") from the locals who have been carving combs, spoons and other wooden knickknacks since the 17th century. When arriving at the 331.5-square-kilometer district, you will find many things to see and lots to do. Houses in Taraklı are a must-see when visiting. Taraklı homes are famous for their white exterior, red tiled roofs and not to mention a captivating backdrop of dense woodland. These houses date back to the Ottoman Empire and have been declared as conservation area, which means they are protected by the government. Finest of all the houses is the Fenerli House, which has a windowed lantern on the roof, a rare feature to be seen on buildings at that time. While strolling along the narrow cobblestone streets of Taraklı you will feel as if you are walking through a museum. The rich smell of history and the stunning scenery will make you want to stay all winter! The generally triple-story homes have been around for more than three centuries and have undergone expensive renovations to keep the historical buildings reserved.

Make sure you check out the Yunus Pasha Mosque when in Taraklı. The mosque was built during Yavuz Sultan Selim's Egypt expedition for Grand Vizier Yunus Pasha in 1517. With its lead-covered dome, this mosque is called "the leaded mosque" by the locals. The square-shaped mosque with a single minaret was built by the renowned architect Mimar Sinan. The most interesting thing about this mosque is that it had underground heating in its time! The mosque was built this way specially by Mimar Sinan back in 1517. The steam from the Turkish bath next to the mosque heated up the floor of the mosque. The Yunus Pasha Mosque is also known for being really sturdy. The building did not have the smallest crack after the 1999 earthquake in Turkey.

The Turkish Bath, also called hamam, is a big part of Turkish culture and seeing the historic Turkish bathhouse in Taraklı is worth the while. The Turkish bath of Taraklı is located in the town center near the Yunus Pasha Mosque. As said earlier, in the years it was first built the steam from the bath would heat up the mosque next door. In its time this bathhouse was supplied with water from a nearby stream, dredged up by a waterwheel that has long since vanished. This historical Ottoman era bath consisted of two pools in different sections and was a luxurious place to be.

The historic inn in Taraklı is a special place people can come and stay, even today. Since Taraklı was on Baghdad Road, this historic inn was a common place for the caravans to stop and spend the night. The historical inn is still open to domestic and foreign tourists who want to stay and absorb the magnificent and nostalgic air of Taraklı.

When visiting Taraklı, make sure you visit the bazaar where locals sell their handcrafted wooden combs, spoons and other souvenirs. You can also buy miniature versions of the renowned Taraklı house and homemade jams inluding the delicious local pine jam. The town center accomodates a few local restaurants where you can enjoy the delicious Anatolian cuisine. Don't forget to try Taraklı's famous dessert, Uhut. This dessert, made from wheat and water alone, gets it's flavor from its consistency.

There are many places you can stay when visiting but the most famous are two mansions, the Çakırlar Konağı and Kadirler Konağı. There are also families who are willing to turn their historical homes into hostels for a while.

If you want to visit Taraklı you don't necessarily have to spend the night, a day-visit is just as worthwhile. There is one bus a day to Taraklı from Istanbul's Harem bus terminal, leaving at 10:00 a.m. and it takes approximately an hour and 30 minutes.

Whether its staying for a week or just a day, you will definitely love the charming little district of Taraklı that has an abundance to offer with its natural beauty and nostalgic atmosphere.