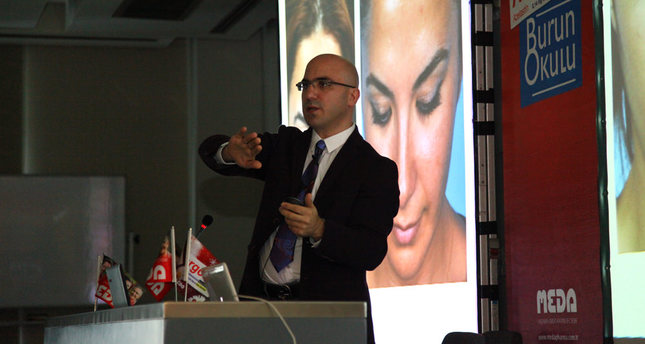 Ear, Nose and Throat (ENT) physician, Dr. Süreyya Şeneldir, is one of the 224 accounts from around the world that Instagram suggests its users follow. Instagram has been used by Şeneldir to draw attention to both the photos he shares and his successful career

Specializing in rhinoplasty (nose-reshaping surgery), Dr. Süreyya Şeneldir has worked as an ENT for Vakıf Gureba Hospital for seven years. Şeneldir spoke to Daily Sabah about his work and experiences. Şeneldir decided to specialize and become the best doctor he could in a single field since he believes it is impossible to be the best in every field. Pointing out that our basic needs such as eating, breathing and drinking water are all related to the nose, Şeneldir said that the aesthetic aspect of it also affected his decision to specialize. Commenting on the hyper-specialization which is occurring in every field, Şeneldir said, "Our elders always say 'talent comes from a compliment.' When many appreciate your work, it encourages you to create more and more. As a nose surgeon, one can both fix a health problem and make the person happy by creating something aesthetically pleasing."

Şeneldir emphasized that when he decided to specialize in nose surgery, the field was not widespread in Turkey, and therefore there was no one to emulate or to be inspired by. Şeneldir said that he has worked to improve himself through technological opportunities, training, conferences held abroad and the circle of friends he has made.

Due to the lack of professional support and networking, Şeneldir decided to establish a platform called "Burun Okulu" in 2009 in order to encourage the sharing of information, and so that his colleagues would not have to experience the same difficulties. As part of the platform, meetings are held three times a year with around 100-150 participants, in addition to around 150 participating online. In these meetings, participants watch live operations that Dr. Şeneldir performs. Additionally, the web site includes short videos and images, which have been compiled from the many operations that Şeneldir has performed so that thousands of doctors may observe them. Doctors can ask questions or exchange opinions via the videos. Another resource that the platform offers is printed and visual media.

Şeneldir said that they continue to improve the platform, highlighting a book project for doctors. When asked whether nose preference changes from culture to culture, or whether someone comes to their first appointment with a picture to illustrate his or her nose preference, Şeneldir said that he has patients from many different cultures, including Americans, Iranians and Turks, and they all want the same thing: a natural-looking nose.

Şeneldir has operated on many famous Turkish and foreign patients in his 23-year career, and has an impressive memory of all his operations. "I performed surgery on a 23-year-old nurse eight years ago. She was very happy with her new look. After the surgery, she was diagnosed with breast cancer, but she was so pleased with herself that she was always smiling even when wearing her wig. Whenever I visited her, I used to hear the same sentence, 'Mr. Şeneldir, when I look in the mirror, I see my nose, not my hair loss. My face is becoming more and more beautiful, which makes me really happy.' Then she went to Sirkeci despite her exhaustion, bought a canvas and gave it to her sister who is a painter. She wanted her sister to draw a portrait of me because the operation I performed had given her moral support,and she wanted to give it to me as a gift. She died one month after this. Three years later, her sister showed up with my portrait in her hand and said it had been her sister's last will that I should have it. She said she had drawn it meticulously, and that is why she found it difficult to part with. That portrait is very precious to me and it is my saddest memory," Şeneldir said.

Şeneldir also shared some pleasant memories with us. "One day, one of my patients came for a routine check-up and I realized that he had not washed his nose for six months because he thought the water would disfigure it; it was coal black! I had another patient who never smiled after surgery. I wondered why he was so sulky even though he did not have a problem with the surgery. I asked his mother and she answered, 'Oh, it has nothing to do with you. My son has not smiled for the last 6 months because he believes his nose, which he admires now, will be deformed if he smiles.' These memories always make me smile."

Şeneldir said that one of his father's sentences summarizes the way he has achieved success, "Whenever I felt disappointed after studying hard for my exams, my father told me that God always rewards those who have really striven for something, and I will definitely be rewarded for my efforts. Actually, I have not done anything different, I have just tried to represent my experiences in the best possible way."