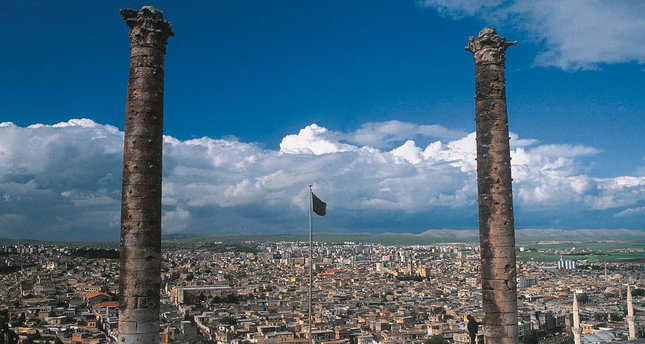 Şanlıurfa, known as ‘the city of prophets,’ is in high demand with tourists fascinated by its historical sites including Balıklıgöl, Halfeti and Göbekli Tepe

Tourists are unable to check in hotels without early booking in Şanlıurfa, or commonly mentioned as "the city of prophets" due to high demands. Every season, tourists from different cities of Turkey and around the world flock into the city, where the first settlement dates back 11.000 years ago. The pool of sacred fish ("Balıklıgöl" in Turkish) where Abraham was born and thrown into the fire by Nimrod is probably the most attractive destination. Additionally, visitors climbing the Urfa Castle enjoy a bird's eye view over the city embracing history and modern buildings at the same time. At the foot of the castle, there are inns transformed into cafes for those who want to relax while drinking "mırra" (bitter coffee) or another traditional coffee "menengiç." They also take a historical journey into the past while wandering around historical bazaars and lodgings.

Generally described as "the land of Fertile Crescent," Şanlıurfa was once the main center of ancient civilizations. With a history of 13.500 years, Göbekli Tepe, one of the world's oldest temples, is another must-see place. The ruins of Göbekli Tepe are characterized as "the zero point of history" in archeology world.

The city is an important center for religious tourism like Mecca and Jerusalem as it was home of several prophets such as Job, Elijah, Jacop, Lot and Jethro. This is why the cave where Job suffered from intense illness and distress for a long period of time, is the next attraction. Seen as the example of patience, Job always prayed to God to remove his sufferings. Tourists visiting the cave wash drink water from the sacred well that is believed to have healing affects.

Reminiscent of a coastal town and situated in the middle of moorland, Şanlıurfa's Halfeti district in southeastern Anatolia is becoming the tourism gem of the Şanlıurfa and the region. During the summer, tourism is lively in Halfeti due to its calm and peaceful environment, and the district was included in the Italybased Cittaslow International Coordination Committee's network last year.

In the year 2000, some parts of Halfeti submerged when the Birecik Dam was constructed. Regarded as the "hidden paradise" of the Southeastern Anatolia region with its natural beauties and stone houses, Halfeti drew 700,000 visitors in the first seven months of 2014. To visit the submerged parts of the district, tourists have to travel by boat.

These touristic attractions increase the city's revenue share in tourism industry. Hotel owners are highly satisfied with the occupancy rate even though there are ongoing military conflicts across the border. Reportedly, many hotels are presently full. Even there are hotels with up to 4.000 beds cannot accept guests without booking. Hotel owners recommend tourist to make early bookings to avoid accommodation problems. Speaking to the Anadolu Agency, Kamil Türkmen, the President of Şanlıurfa Regional Tourist Guides Chamber, said they are proud of the rapid momentum in the city's tourism. He underlined the need for further tourism investments because the current capacity of hotels is not sufficient to supply the demand. He also pointed to the potential tourism capacity in the Southeastern region, notably Şanlıurfa. "To achieve more success, the city needs more investments in accommodations," he continued. Türkmen believes the city has much to offer for tourism investors.