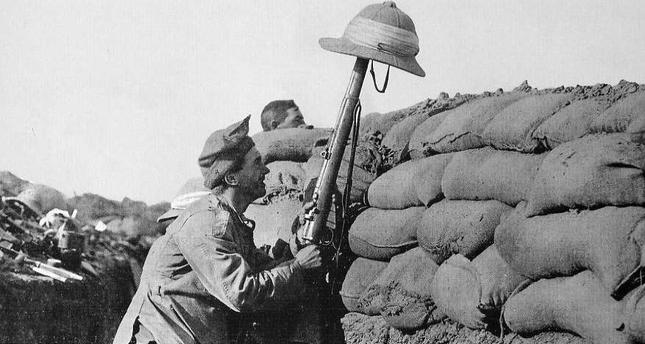 A book written by Bülent Günal, compiled from 100 Vatican documents, focuses on the story of young ANZAC lieutenant and underscores the favorable attitude of the Turks for their enemies at the time of the Battle of Gallipoli

Journalist and author Bülent Günal recently wrote a book titled "Çanakkale 1915: Vatikan Gizli Arşiv Belgeleri Işığında Frank Coffee Vakası" (Gallipoli 1915: The Case of Frank Coffee in Light of Secret Vatican Archives) with a focus on the humanitarian side of the Battle of Gallipoli. Published by Kültür A.Ş. to mark the centenary of World War I, the book was inspired by the true story of a young ANZAC lieutenant and was written after secret Vatican documents were released thanks to the efforts of Rinaldo Marmara, the press secretary of Turkey's Catholic Bishops Conference and Cultural Attaché, who worked to uncover for them for three years.

The book opens with historical documents that feature the correspondences between the Vatican, which was closely following the war, and its Istanbul representative, Monsieur Dolci. It then picks up momentum by featuring the family's letters to Pope Benedict XV that pleaded with him to find where lost soldiers were buried.

Amid the chaos of war, Ottoman War Minister Enver Pasha paid particular attention to graves and ordered the generals to respect them, and even directly told soldiers to take care of them. Upon the request of English, French and Austrian families, the graves of dead soldiers were searched for.

The report of Monsieur Dolci to Roman Catholic Cardinal Pietro Gasparri, dated April 4, 1916, gives detailed information about the cardinal's meeting with Enver Pasha. Dolci first wrote about his talk with Enver Pasha and then the pasha's response. Some of the translated accounts include:

"The military priests have confirmed that War Minister Enver Pasha gave the order with this intention. I am well-aware of his noble and heroic feelings; even though he has many responsibilities, he was ordering his generals to protect these sacred graves from the early days of the war."

"The minister drew my attention to his strict orders to take the necessary precautions, and immediately bounded the cemetery areas with iron wires as well as restricted anyone from harming the graves, as much as the war conditions allowed."

"He said if any of them were damaged, it was probably because of the howitzers of enemy ships hitting the graves, adding he even saw such an incident in a war zone. Honestly, I was also informed about this case. Shells damaged some of the graves inside the cemeteries, but when the firing ended, [Turkish] soldiers immediately intervened and returned them to their normal condition upon the order of Enver Pasha."

Count von Lüttichau of the German General Staff, who was a Protestant military chaplain, wrote in 1996 about the conditions of the graves of English and French soldiers who died in Gallipoli. The original name of his work, "Bericht über den Befund der Gräber der französischen und englischen Gefallenen auf Gallipoli, Konstantinopel, Kaiserlicher Botschaftsprediger und Marinefeldgeistlicher" (Report on the findings of the graves of the French and English who died at Gallipoli, Constantinople by the imperial embassy's priest and navy chaplain). Von Lüttichau also described how Turkish soldiers took care of the graves.

The story of the ANZAC lieutenant, Frank Matthew Coffee, stands out among all the letters featured in the book, and it has a special section about the case of Coffee who died after shrapnel struck his heart on Nov. 19, 1915. His unfortunate story began with the letter by his father who heard the tragic news in Sydney, far away from the war. His father wrote a letter to the Vatican to find his son's grave and send his body to his homeland in order to hold a funeral. Coffee's efforts took almost four years; Yungels, the head of the Ottoman Army Medical Department and the chief of staff of the mobile military hospital, sent a letter to Dolci on June 28, 1918 and suggested that Coffee's grave might have been damaged due to the bombardment. In his letter to Gasparri, dated June 17, 1920, Dolci said that he had received the record and photographs of Coffee's grave. Another piece, dated Oct. 5, 1920, reported that his body was not transferred and was left next to other soldiers in Gallipoli.

The case of Coffee presents another question: Was Mustafa Kemal Atatürk aware of this incident? Did he know about the abovementioned letters or the search for the young lieutenant's grave? These questions are also addressed in the book, and Atatürk's statement that was delivered during the commemorations of the Battle of Gallipoli on March 18, 1934 is discussed as well.

"Those heroes who shed their blood and lost their lives … you are now lying in the soil of a friendly country. Therefore rest in peace. There is no difference between the Johnnies and the Mehmets to us where they lie side-by-side here in this country of ours … You, the mothers who sent your sons to far away countries, wipe away your tears. Your sons are now lying in our bosom and are in peace. After having lost their lives on this land, they have become our sons as well."