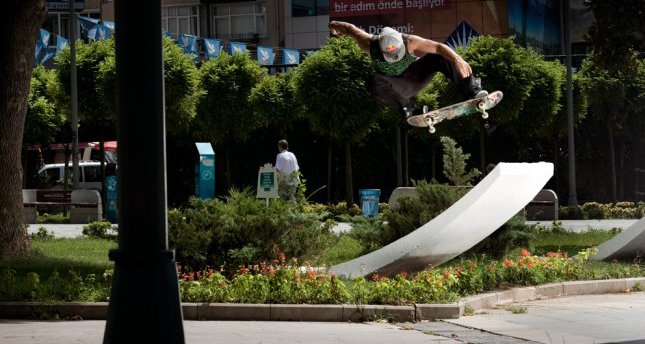 Skaters have been shredding on wooden boards for ages, probably even before you were born. Slowly but surely skateboarding is gaining recognition among traditional sports like football and baseball and becoming a common sight around the world including Turkey

Skateboarders… you see them hanging out at local spots, you hear them rolling down the street and you might even know a few of them. Ever since the introduction of skateboarding, seeing groups of skaters has become common throughout Turkey. If you live in Istanbul, it is highly likely that you know Beşiktaş on the European side is a favorite venue for these guys and gals. With the expansion of skateboard culture it's inevitable to think about the birth of such a popular recreation.

No one knows for sure exactly how the first skateboard came to be, but it is said that it was actually surfers in California who came up with the idea. During the 1950s, when surfers weren't able to surf the waters of the west coast, they found the answer in surfing the streets instead. Can you imagine the sight of shaggy surfers shredding the streets of Hollywood on 2x4s with roller skate wheels attached to them?

And so the sport of skateboarding was born. But it didn't end there; adjustments were made with many others made by the day. Eventually, shops that sold boards and wheels and all the essentials were established marking the end of "homemade boards." Skate shops met the material demands of skaters but this wasn't enough, because what is a board with nowhere to skate? It's no surprise that skaters saw the world as one big skate park, skating anywhere and everywhere. But the public eye didn't see the world the way skaters did, and overtime developed a prejudice against skateboarders.

In time the persistency in pursing this thrilling sport led to the building of skate parks. By the end of the 1980s skate parks were popping up everywhere from the east coast to the west. It was exactly at this point in history when skateboarding was introduced to Turkey. Turkey didn't follow the development of skateboarding due to the fact that anything other than soccer wasn't seen as worthy of the "sport" title and mostly because the sport was seen as a childish hobby. In time, these notions were exchanged for more understanding ones and Turkey opened its culture to skateboarding.

The import of foreign skateboard brands like Vans, Element, Pig, Trap, Cliche, Zero, Baker, Flip and many more started flocking into Turkey. Eventually domestic skateboard brands emerged, setting the final blocks for skateboard culture. Turkish skateboard brands such as Gloves, Noir and The Roof have since made a huge impact in the development of the sport in many provinces in Turkey including Istanbul, İzmir, Bursa, Ankara, Antalya and İzmit.

In order to bring the culture and unity of skating to skaters these brands have established local and national teams. The members of these teams skate together, go on tours and make videos to better express the life behind the skating tradition. Can you imagine the fun these teams have as they travel the country in search for the best skating venues?

We had a chance to talk to Saba Eker, the owner of The Roof Skateboards, about her plans for the İzmir based skate brand.

Daily Sabah: How is skateboarding referred to in Turkey? How are skateboarders generally perceived?

DS: Is there a specific group of people that skateboarding attracts?

SE: There is freedom of expression at the heart of skateboarding and lots of room to socialize. Aside from this all you need is balance and imagination. Skateboarding appeals to anyone who believes they posses these qualities no matter what their age, gender or style.

DS: What does it mean to be the owner of a skate brand in Turkey?

SE: With all its hardships and struggles, it makes me very proud. Creating a brand is a big investment and needs a lot of creativity and imagination as you may imagine. Ensuring the continuation of that brand is an even greater struggle. Some of the struggles come from the need to export materials and urge the government for the expansion of the skateboard industry as well as sponsors. All of our friends in the industry have the same goal: introduce skateboarding and expand the industry. Besides "The Roof Skateboards," there are two other Turkish brands and we're all trying to do the same thing: Introduce our brand and have our skaters represent Turkey in foreign countries with pride. Turkish brands that represent Turkey need more support so that we may expand and develop the industry under our flag because it is our duty to spread the culture in the right way in Turkey. In Europe and America skateboarding takes its place among extreme sports and that is eventually what we want in Turkey as well. In short, even with the hardships and limitations, I am still very proud and hopeful for the future of skateboarding.

DS: How does The Roof skate team differ from the others?

SE: We don't really have a huge difference from other groups. We do our jobs with passion just like the next person. Everyone on the team is disciplined and versatile. We are all interconnected; we're a family in that sense. Everyone brings their own lifestyle and methods to the group. We try to keep up with the skateboard and street culture around the world and shape our brand accordingly.

DS: What are your hopes for the future of The Roof?

SE: First of all we want the industry to expand and develop much all everyone else in the industry. We hope to bring forward new talents, and eventually expand into Europe.