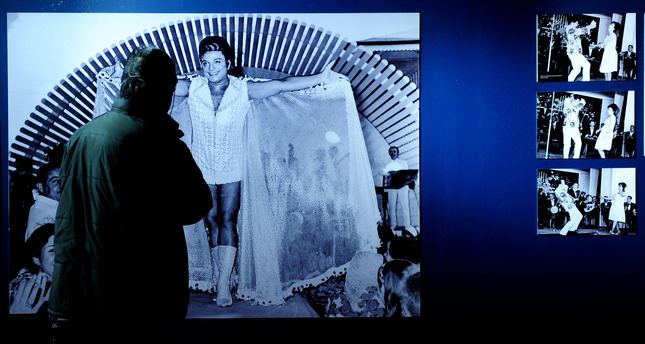 Istanbul’s Beyoğlu district is hosting a special exhibition honoring Zeki Müren, a beloved Turkish singer, featuring belongings and other items that shed light on both his personal and artistic life

Touted as the "Sun of the art," the late singer Zeki Müren adored women's clothes, outrageous makeup and was elevated as a gay icon – an unlikely hero for modern-day Turkey. Yet, a new exhibition on his life is drawing in record crowds in Istanbul.

Müren bucked all trends in a country known for its conservatism; he was considered a national treasure by the time of his death in 1996, as dear to the hearts of the Turks as Frank Sinatra was to Americans.

He neither confirmed nor denied the suggestions that he was gay, yet became a hero for the country's homosexuals. Oddly, this never dented his popularity even in Turkey's often homophobic society.

A consummate entertainer, Müren was a beloved movie star as well as a prolific songwriter and eccentric vocalist, a master of sentimental "Turkish art music," which has its origins in the court music of the Ottoman Empire.

This – and his extravagant clothing, baubles and oversized rings – earned him the nickname "Turkish Liberace" after the flamboyant U.S. entertainer who died in 1987.

Titled "Here I am, Zeki Müren" after one of his biggest hits, the Istanbul exhibition offers a rare look at his extraordinary life. Dozens of photos – from early childhood to flashy stage shows, films, world travels and nights out with stars – along with letters and shimmering artifacts pay homage to his legacy.

In its first 40 days, the show drew a record 42,000 visitors to the Yapı Kredi Culture Center in the city's cosmopolitan Beyoğlu district, the most for any exhibition held at the site. Many said this was a sign that Istanbul cultural life remains vibrant.

"He's just a part of our DNA," Veysel Uğurlu, one of the curators, told AFP. "Everyone has heard a Müren song. Visitors say, 'This is an exhibition about my life.' "

Müren, who never married nor had children, donated all his possessions to the Turkish Educational Foundation and the Turkish Armed Forces prior to his death.

One room has letters from Müren's mother, Hayriye, addressed to "my one and only, darling son." "You are the world's sweetest fruit," a missive reads.

In another, she compares Müren to "a wingless angel brought to this earth from the moon by the Apollo 11 spaceflight."

Other rooms showcase his sky-high platform boots, sequined jumpsuits, bejeweled capes and boldly patterned mini-skirts, most of them designed by Müren himself.

Known as the first Turkish man to wear a skirt on stage, the star gave affectionate names to his outfits, like "Moon Prince," "Purple Nights" or "Hero's Dream."

"As you know, the gravity on the Moon is low. This makes it difficult for astronauts to walk on the moon. That's why I'm wearing these boots," he once said.

One of the biggest draws in the show is a hand-written recipe for a special "Müren Cocktail" of lemon, vodka and cognac, invented by the singer for "long and cold winter nights."

"But don't drink too much," Müren warned. "One glass is enough to make you forget about all your troubles and bring you the sweetest of sweet dreams."

After a life in front of cameras, Müren even died on stage, suffering a heart attack in 1996 at age 65 while recording a show for TRT national television in the western city of Izmir. The channel had just given him the microphone he had used in his first radio broadcast in 1951. Overcome with emotion, the singer collapsed a few minutes later. His death plunged Turkey into mourning.

"He was a groundbreaker. He taught us it's OK to be different, to think differently, to express yourself differently," Uğurlu said, adding, "He will remain forever in our memory."

The show, already extended twice, is now set to run until Jan. 15.